TheWrap awards magazine: The ”American Horror Story“ vet talks to the TheWrap about his unusually heartfelt role in the HBO miniseries

While it might have been a shock to viewers, the bomb-drop at the end of the unnervingly tense fifth episode of “Mare of Easttown” was not a shock to Evan Peters. (Definitely come back to this feature later if you are not caught up on the HBO drama.) After his endearing, dutiful detective Colin Zabel finally won the approval of his seasoned partner Mare (Kate Winslet), complete with coffee runs and a particularly awkward first date, he moves up the hero ladder when the duo finally hones in on a vile creep (Jeb Kreager) they suspect is behind the disappearance of at least one young woman in Delco (Delaware County, in Pennsylvania). Cut to a pack of Winstons (a key clue), an exchange of anxious glances and drawn guns and before you could take a sip of your Wawa java…Colin Zabel was very suddenly shot dead and hearts all over the nation were bruised forever.

“It was great to see a beginning, middle and end to the arc of the character, but saying goodbye to Kate and the cast and everyone else was very upsetting,” Peters said. And the shocking turn forced viewers to also accept the fact that Colin was, indeed, not going to be on the docket of possible murderers for the main story of a young mother (Cailee Spaeny) found dead in a creek. “I got a little bit of the red herring thing, that I was a ringer,” Peters said with a laugh. But who could blame a viewer for thinking as much, especially from the fellow who once played Jim Jones, David Koresh and Charles Manson, all in the same season of “American Horror Story“? 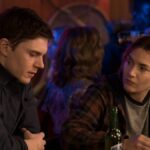 Also Read:
‘Mare of Easttown': What You Need to Know About Those Scene-Stealing Props

“It was a nice change to go into something a little more grounded,” Peters said. “Originally, we had talked about Colin being more cocky, doing trick shots while playing pool, and I wasn’t sure we’d ever get to that Tom Cruise-“Color of Money” level. But we always knew that he was going to die — you wanted to feel for him, and you wouldn’t if he were so arrogant.” The puppyish incarnation of Colin also allowed the actor to utilize an art-imitating-life angle as he tried to impress his Oscar-winning costar, especially in mini tours de force such as a lengthy bar scene with Winslet in which his inebriated Colin opens up about meeting his ex-fianceé that day — all in a wholly believable Delco accent, no less.

“I wanted to amp it up and really have fun with it, because when you’re upset or in a vulnerable place, the accent definitely comes out more,” he said. “And then I had to hold on to it for six or seven months when we were shut down (for the pandemic).” 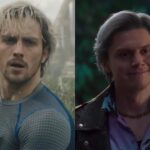 The “Pose” and “X-Men” vet also threw himself into research, devouring Netflix crime docs and episodes of “The First 48”, as well as Vernon J. Geberth’s “Sex-Related Homicide and Death Investigation.” Peters described the book as “basically a detective textbook with terrific case studies and descriptions — in real life, this work is very portfolio-based and casual, very unlike what you see in most movies.”

The actor also got to participate in a pretty modest Pennsylvania ride-along, where the police action he got to see included “unlocking someone’s car door, a 16-year-old driving with her mother who sideswiped a window mirror and a lost Saint Bernard. It’s very small-town life, very humble and down-to-earth. A lot of people doing very real things to survive.”

Peters is currently working simultaneously on both the newest installment of “American Horror Story” and a plum title role in Netflix’s “Monster: The Jeffrey Dahmer Story”. Those jobs mark a temporary end to his segue into playing easily relatable characters, but they continue a common theme as he also filmed Marvel’s secretive “WandaVision” while shooting Mare. “That was hilarious,” he said. “I’d actually be brought to (the “WandaVision”) set in a cloak and an umbrella. But it’s so exciting that people love both shows. It feels really good to be working with people bringing their A-game.”