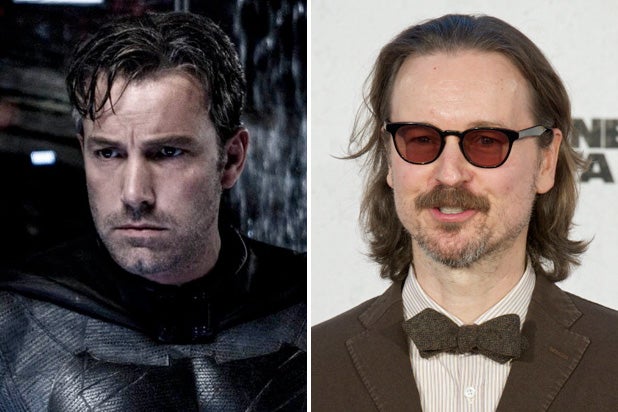 Warner Bros. found itself with a very nervous DC fanbase on Jan 30. That’s the day Ben Affleck, signed to star-in, write and direct the studio’s standalone “Batman” film, quit as director citing an inability to give his full focus in all three roles.

Affleck’s decision to bail on behind-the-camera duties certainly wasn’t WB’s first DC Comics director-related setback. “The Flash” stand-alone film for instance is currently on hold and being rewritten after not one, but two directors quit. But the departure of Affleck, an oscar-winning director with a long and fruitful relationship with WB, seemed like a bad sign. And a sizable number of fans openly wondered if the still-untitled “Batman” might end up following in the footsteps of “The Flash.”

Today, however, it was announced that WB has solved its “Batman” problem. Following a public negotiation that played out in the press, “War for the Planet of the Apes” helmer Matt Reeves has signed on take over for the outgoing Affleck.

That’s great news for fans. Reeves is a proven storyteller of the sort that the DC movie universe desperately needs. And despite the disappointing, and grimly received “Batman v Superman” and “Suicide Squad” that launched the shared mega-franchise under a cloud in 2016, Reeves taking the reins of Warner Bros.’ flagship comic book property is enough to make us legitimately optimistic.

The behind-the-scenes drama on “The Batman” has been an emotional roller coaster for those of us on the outside. Affleck as writer/director was an extremely enticing prospect — as it always is when a “real” filmmaker takes the reins on a big budget nerdy project. Christopher Nolan taking on the Caped Crusader with “Batman Begins,” was a similar thing, and as we all saw that marriage worked out pretty well.

Reeves’ situation is a little bit different, but honestly he’s a more exciting prospect than Affleck was for a number of reasons. That’s not to say Affleck was a bad choice. But if we’re talking about whether Reeves or Affleck is more likely to make a great “Batman” movie, Reeves would be the easy pick because he already knows how to make this kind of movie. Affleck very well could have made a classic — he has some great movies under his belt — but his past experience as a director offers no guarantees with this specific project.

But let’s dig a bit deeper into why Reeves feels like a better choice. We’ve got four main reasons.

First — for Affleck, “The Batman” would have been an experiment in bringing his “real movie” expertise to the genre space. That’s never a sure thing, and it is the kind of thing that often leads to conflicts with the higher ups at a studio when they’re spending $200+ million on your movie.

Reeves, on the other hand, has thus far spent his entire career as a director doing the thing Affleck would have been trying to do for the first time. “Cloverfield,” “Let Me In” and “Dawn of the Planet of the Apes” are all genre pictures with decidedly nerdy subject matter that are constructed with a “real movie” feel. If “Dawn” was a movie about a conflict between two groups of humans, instead of humans vs apes, we’d call it gritty Oscarbait. Reeves makes dramas that just happen to have a genre bent. If you were excited about Affleck directing “The Batman,” it was because you wanted what Reeves has long since proven he can deliver.

Second — Affleck has never had to construct a world for any of the movies he’s directed, because they all took place in the real world. But operating in the genre space requires a filmmaker to not just take ownership of the story being told but also the world that story takes place in. That’s also something Reeves has already proven he can do, with “Dawn” in particular but also “Cloverfield” and “Let Me In.”

As we’ve chatted with DC insiders, we’ve heard that Reeves as a worldbuilder, and his proven ability to craft genre films with the weight of more traditional dramas, were big factors for why they and Warner Bros. chose him for “The Batman.” So at least we’re all on the same page there.

Third — the reason Reeves is able to pull off that “real movie posing as genre” thing so well is because he really does seem to approach these projects with something to say. And not just the broad, reflexive left-leaning truisms that inevitably make their way into most American films. Real meat only comes when you’re acting with purpose. Reeves is definitely not a journeyman studio hack — he’s committed to using the genre elements of his movies to say what he wants to say. And, just as importantly, he’s demonstrated this multiple times.

Fourth — Affleck has never made a proper action movie. Reeves on the other hand has already delivered one of the decade’s best with 2014’s “Dawn of the Planet of the Apes.” While past success is no guarantee of future success, it must be noted that with “Dawn’s” climatic fight scene between Andy Serkis’ Ceasar and Toby Klebbel’s Koba, Reeves crafted a cinematic fight for the ages.

The big concern from here, though, is whether Warner Bros. will actually let Reeves do what he knows how to do and execute whatever vision he brings to the project. That’s far from guaranteed, if the drama on “Suicide Squad” is any indication.

In other words, Reeves may have a fight on his hands over the next couple years. But if Warner Bros. is serious about ensuring that it’s still-developing DC movie universe survives and thrives, it’s a fight the studio will let Reeves win.