TheWrap magazine: The veteran Disney animator who won an Oscar with Kobe Bryant for ”Dear Basketball“ makes his feature directing debut with the Netflix animated film

A version of this story about “Over the Moon” first appeared in the Oscar Nominations Preview issue of TheWrap’s awards magazine.

Glen Keane draws. It’s the way he communicates. It’s how he started at Walt Disney Animation Studios in 1974, how he sketched Ariel in “The Little Mermaid” and the Beast’s transformation in “Beauty and the Beast,” and how he and Kobe Bryant won an Oscar for the hand-drawn short “Dear Basketball” in 2017.

And while his film “Over the Moon” is a large-scale and often dazzling computer-animated fantasy, it also contains a sequence early on that uses Keane’s line drawings to tell the story of the Chinese moon goddess Chang’e.

“When I was reading the script, I thought, ‘OK, I am going to hang onto this little piece, and this is going to be my moment,'” he said. “For me, I need to get into the skin of a character — and with Chang’e, I needed to really understand her deep longing. And to do that, there’s something in the sincerity of drawing.”

Also Read: Animator Glen Keane Reaches for the Stars in Trailer for Netflix's 'Over the Moon' (Video)

Keane added, “I did more drawing in this movie than any movie I’ve ever worked on, including ‘The Little Mermaid’ and ‘Beauty and the Beast.’ I drew over every frame of the film.”

Two of Glen Keane’s “Over the Moon” sketches: 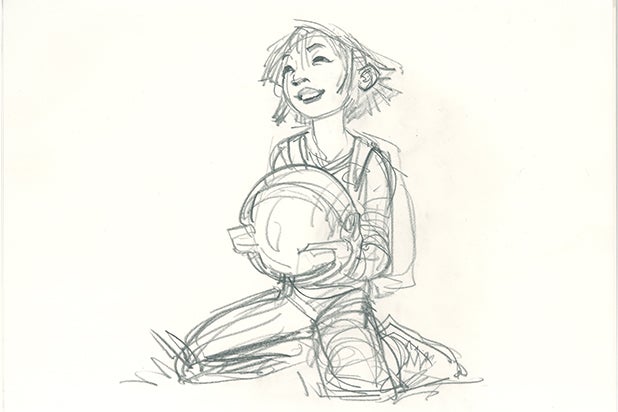 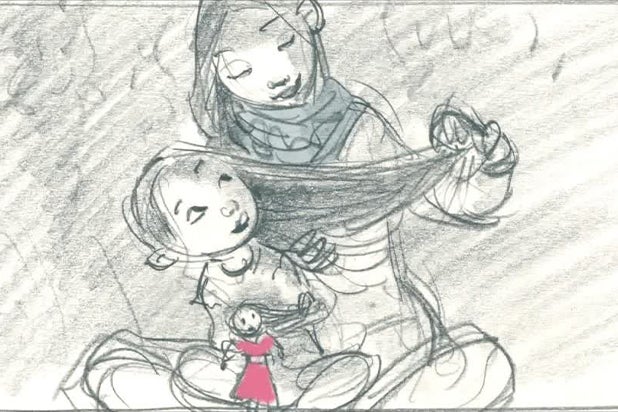 “Over the Moon,” Keane’s first film for Netflix and also surprisingly his feature directorial debut, starts out in a small town in China, where a young girl named Fei Fei decides to build a rocket to travel to the moon and prove that Chang’e is real. Wary of being a Westerner telling a story from a culture he knew little about, Keane traveled through China with his sketchbook, going into homes in small towns and drawing everything he saw.

“Everything I smelled, I tasted, I heard, I saw, I touched is in this movie,” he said. “There’s this wonderful thing I’ve found in my career, that when you create something from the point of discovery, you are so passionate and you can’t wait to share it.”

Among the discoveries he wanted to share, he said, were certain things that upended what he’d always taken for granted. “You go to a Chinese restaurant and there’s this lazy Susan where all the food is, and I always thought, ‘Oh, that’s a convenient way to get food around there.’ But really, it’s a symbol of a shared life. Everything in a Chinese family is about connecting from one generation to the next to the next. There was such a depth of the roots, of ancestry. And I got that every in every place that I went, especially in the homes, as compared to America where our roots are so shallow. I knew those experiences with meals were going to be the bookends for the movie.

He also worked hard to figure out how to emphasize the difference between the scenes set in China and the ones on the moon city of Lunaria. “‘The Wizard of Oz’ had the great opportunity to go from black-and-white to Technicolor, but that’s been done so we couldn’t do that,” he said. “My production designer, Celine Desrumaux, was describing the way light reflected off the walls in this little town of Wuzhen, the way you saw white walls but the reflections were all blue and green and yellow. And so everything in the real world was going to be reflected light — but on the moon, we were going to use source light emanating from within.

“I gave her the Pink Floyd album cover ‘The Dark Side of the Moon,’ with the prism and the white light exploding into color. And I remember the day that she showed me a shot with Fei Fei in front of these glowing spheres that were based on Miro’s artwork, and it was so colorful and so ludicrously beautiful all I could do was laugh and cry at the same time.”

The progression of a scene in the lunar landscape: 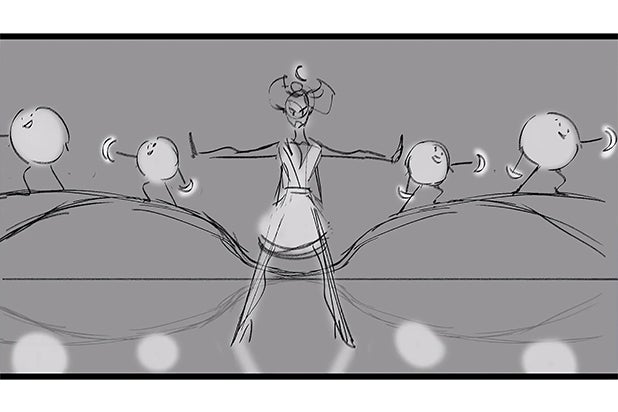 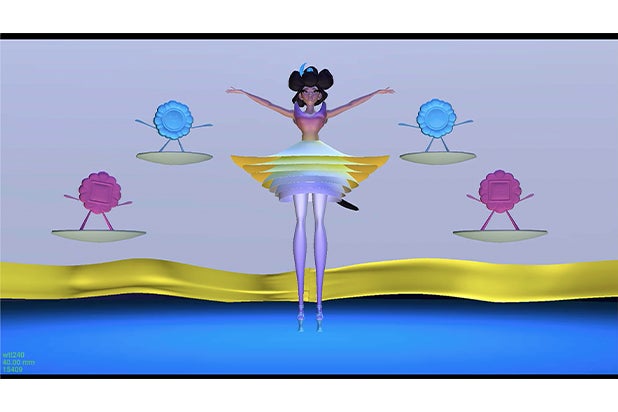 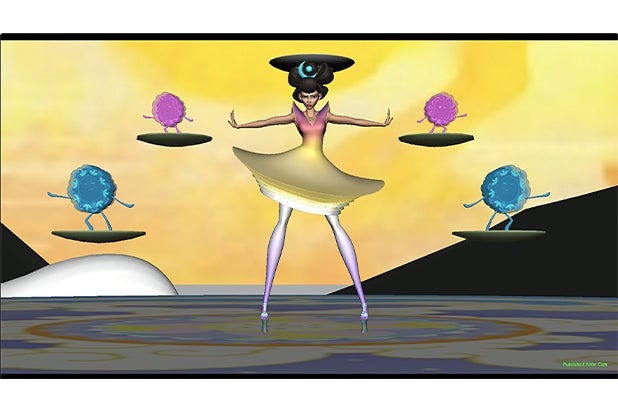 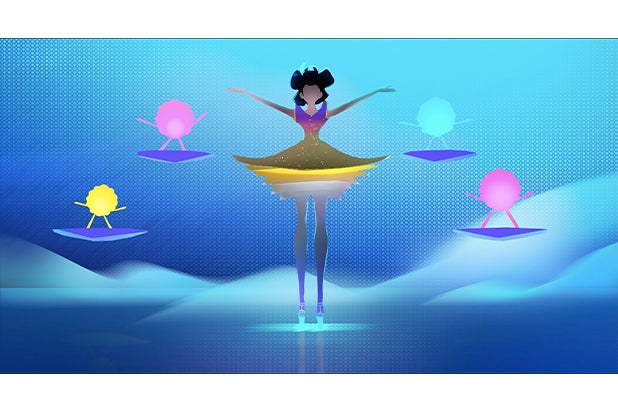 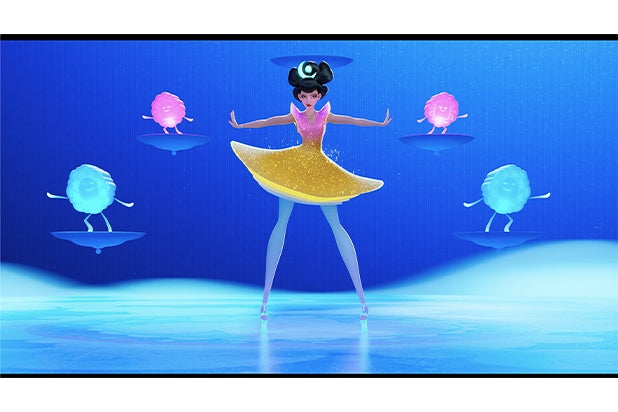 That mixture of emotions was fitting for “Over the Moon,” which was written by Audrey Wells prior to her death at the age of 58 in 2018. “There was so much depth of emotion in the script, which had such personal meaning that Audrey put into the script and would not live to see it,” he said. “Like, I remember going through the script and reading ‘the chamber of exquisite sadness’ for the first time, and you just don’t skip over those words. It’s where Chang’e goes to deal with her pain. And if the rest of the script had been lost and all the pages were gone, I’d know exactly what to do just from the way she described that.

“Those emotions that she put into the script for were a message, really, for her daughter to not run away from the pain, that there’s this exquisite joy on the other side. And we experienced that. In editing, we went through so many boxes of Kleenex.”

In that way, he said, “Over the Moon” felt like a continuation of “Dear Basketball,” Kobe Bryant’s farewell to the game he loved. “Both projects were a swan song, leaving behind a statement,” he said. “To do them both was an incredible privilege that you take really deeply and seriously.

“I was not planning on doing this movie – I had another film that would have been my first feature, but this was something I couldn’t say no to. And I couldn’t not do Kobe’s film, either.”