Gong Li established herself as one of the biggest international stars to come out of China in the early 1990s, starring in the Oscar-nominated films “Ju Dou,” “Raise the Red Lantern” and “Farewell My Concubine” in a four-year stretch and then cementing her global stardom with films like “Memoirs of a Geisha” and “Miami Vice.” And while director Niki Caro made good use of her imperious glamour in last year’s “Mulan,” the actress tried something different with “Leap,” this year’s Chinese entry in the Oscars Best International Feature Film race.

Peter Chan’s film is a real-life sports drama, and Gong Li’s usual style is nowhere to be seen in her performance as Lang Ping, a former women’s volleyball star who as coach helped lead the Chinese national team to worldwide success. It’s a different look for Gong — bespectacled, with close-cropped hair and a wardrobe that is functional at best — but one that was vital to get right.

She spoke to TheWrap through an interpreter in a recent interview.

Why were you interested in telling this story?
First of all, in China’s recent history there really weren’t any good sports movies – this is the only one. When I saw the script, I felt it is a very meaningful movie. The Chinese’s women volleyball team is not only an outstanding team, but ever since the 1980’s Chinese people have been following the team. And by following the Chinese women’s volleyball team, we are able to see the changes that happened in China.

How important was it for you to look like Lang Ping, talk like her and move like her in your performance?
It was of utmost importance to be like Lang Ping, because she is the most famous leader and coach of world champion volleyball teams and her image appears on the internet and the TV almost every day. Her persona, her image is so engraved into the mind of the people that if I have any blemish in my performance, if I am not like her in any way, people would not believe me. So I did a lot of training on her voice, on walking, on her posture. And from there you go to the inner world of Lang Ping — you go to her coaching style, go to her spirit.

Did you spend a lot of time with her in preparation?
Well actually, she didn’t have a lot of time for me. I was able to observe her for 15 days, but there was not really much communicating during those 15 days. All I did was observe her — she was coaching and I was standing there observing her, because I did not want to interrupt her work. I had two very short interviews with her — one time was an interview and the other time was just talking during a meal. Lang Ping has a very outgoing personality but she doesn’t really talk too much about her personal feelings.

In the film, the younger Lang Ping is played by Bai Lang, her daughter. Did you work with her to figure out things that would be consistent between the two performances so it looked like one person at different stages?
Not really. I believe the director had his own considerations about how he wants the role of young Lang Ping to be. Her daughter’s name is Lydia Bai, a very talented young woman who has never actually learned how to act but she did a wonderful job in the movie. I feel like it doesn’t matter if we are a little bit different. On the set we also became good friends, and when she first saw me she said “Oh you look just like my mom!” I said, “OK, then call me mom.” We actually behaved like a mother-and-daughter team.

A lot of your co-stars in this film were athletes not actors. How does it affect what you do when you’re surrounded by non-actors?
First of all, they are all professional volleyball players and I need to let them believe that I am their coach. If they believe that I am their coach, it would be a lot easier to work with them. They are professional athletes, and what if they don’t trust you? I told them, “All you have to do is to be yourself, and to act with your heart, to be who you really are and that will be sufficient. You don’t really need to act to be yourself.” 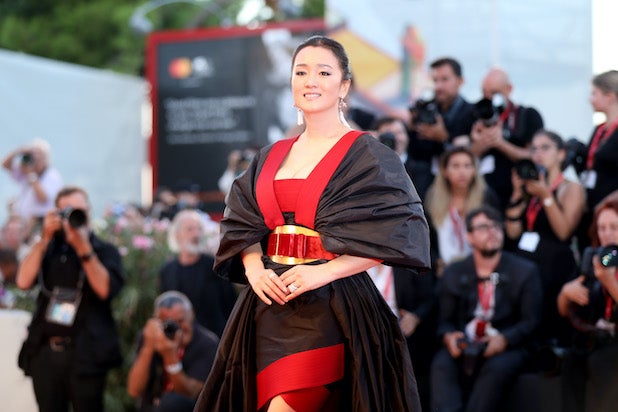 Part of this movie is about the pressure that the team and the coaches felt to represent their country internationally. Since you’re probably the biggest Chinese star around the world, have you felt pressure that you’re representing China as well?
I didn’t have any pressure, but I do understand that I represent Chinese actresses and actors. I take that as my own personal task.

At this point in your career, are you conscious of trying to balance Chinese-language films with international films?
I do not purposely try to balance the two languages in making films, but there are not so many strong characters that are suitable to be played by Chinese actors and actresses. If I was offered a role that does not allow me to develop my character fully, I will probably not accept that. But so far I have worked with Hollywood in many movies which I thoroughly enjoy, such as “Miami Vice,” “(Memoirs of a) Geisha,” “Young Hannibal,” and I felt that I was given space to develop my character fully.

If I do not have good roles that would give me that opportunity, I would probably just choose to wait for a good role in the future so that I would not waste my time. It is true that we do have more choices in Asian films and Chinese films, but this is what the situation is right now.