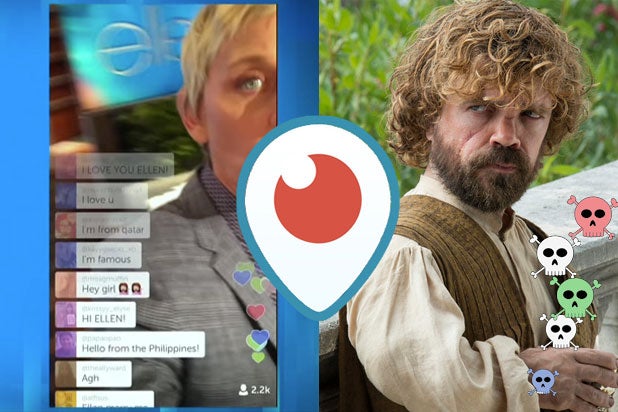 HBO fired off a scathing statement on Monday, criticizing the mobile app after fans of “Game of Thrones” live-streamed the Season 5 premiere to viewers around the world.

“We are aware of Periscope and have sent take-down notices,” an HBO spokeswoman said in a statement to TheWrap. “In general, we feel developers should have tools which proactively prevent mass copyright infringement from occurring on their apps and not be solely reliant upon notifications.”

However, the social media platform said it strictly prohibits copyright infringement, according to the company’s content policy. “

“We respect the intellectual property rights of others and expect Periscope users to do the same,” Twitter states on its site. Additionally, the company has a team dedicated to content review.

But the HBO “GoT” debacle doesn’t seem to have made much of a dent in the app’s increasing popularity. According to App Annie, an international digital research firm, Periscope is currently ranked 165 among all apps in the U.S., and 22 among social media apps.

Despite the hiccup — Perisicope, which allows anyone to livestream video at the touch of a button, can count some of Hollywood’s biggest stars among its early adopters and fans — including Ellen DeGeneres, Seth Meyers and Jimmy Fallon.

“As soon as we started testing with Periscope we realized there was a great opportunity here,” executive producer of “Dancing With the Stars” Joe Sungkur told TheWrap. “What Periscope allows us to do is use this livestreaming ability to give little bite-size chunks throughout the day and really tease the show.”

“DWTS” is one of the first shows to embrace Periscope, even before its official launch. Producers introduced dancers and contestants to the app and asked them to fire it up whenever they felt like it.

“It’s so accessible, you don’t have to go through the rigmarole, getting everyone organized,” said Sungkur. “You can do it on the fly now.”

And that accessibility is exactly what the huge selling point, according to experts.

“It’s a game changer,” founder of Los Angeles-based media company, theAudience, Oliver Luckett, told TheWrap. “Anyone can now become a TV star with an audience. That’s what’s crazy! You get fans instantly from around the world.”

While HBO may have present issues with Periscope, others have embraced it and are harnessing the app’s power to engage fans and drive TV tune-ins.

Jimmy Fallon was among the first to use the app, broadcasting a “monoscope” the day the product was released; NBC’s “The Voice” held a Periscope viewing party; And both iHeartRadio Music Awards and Kids Choice Awards shared some red carpet moments and backstage action – all on Periscope.

Ellen DeGeneres, an early fan of the app, probably summed up the Periscope craze best.

While DeGeneres and other talk shows have used Periscope live on the air, scripted shows have had to find more creative ways to use the app to their advantage.

Fans of Starz’ drama “Outlander” got an unexpected all-access red carpet pass when producers of the show fired up the app during a recent screening of the show’s Season 2 premiere.

“Scandal” stars Josh Malina, Bellamy Young and Katie Lowes have been broadcasting from the set of Shonda Rhimes‘ ABC juggernaut, and even gave “Gladiators” an inside look into their private trailers.

A&E will be giving its fans a special treat in the form of a live digital tour of the iconic Bates Motel to promote an upcoming episode of the “Psycho”-inspired show.

And Comedy Central’s “Big Time Hollywood, FL” recently had its stars broadcasting live commentary as they binged watched the first three episodes of the show.

“For years stars and creators have been tweeting and posting on Facebook really giving fans a chance to get inside their favorite entertainment properties in a way they’ve never been able to before,” Comedy Central’s chief marketing officer, Walter Levitt, told TheWrap. “Persicope really feels like the next evolution of that.”

While the app is still the small fish in a very big pond, experts say Periscope will continue to make waves in the ocean that is Hollywood.

“It’s a much more intimate version of what Twitter was,” said Luckett. “I got very excited about it and told all my partners that they should be putting together Periscope networks immediately.”