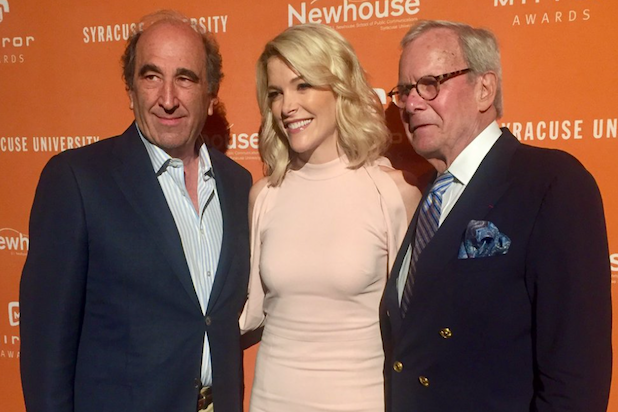 “This is a man who spouts wild conspiracy theories and yet, has influence with the president. There’s a clear understanding in the newsroom: This is an important interview that people should see,” an NBC News insider told TheWrap.

“Sunday Night with Megyn Kelly” executive producer Liz Cole echoed the insider’s comments, telling TheWrap: “Viewers will see Megyn do a strong interview where she challenges him. When someone actually sits down with him and asks him questions he has to answer, there’s value to that.”

When Kelly previewed an upcoming interview with Jones last Sunday night, critics immediately expressed concern that NBC is giving the conspiracy theorist a platform. During the 97-second preview, Jones calls the attacks of Sept. 11 an “inside job,” questions the legitimacy of the shootings at Sandy Hook and says, “30 years ago, they began creating animal-human hybrids. Isn’t that the big story Megyn Kelly should be doing?”

Kelly has since lost an advertiser and lost the opportunity to host a gala for the Sandy Hook Promise, a leading gun violence prevention organization.

Kelly took to Twitter to defend the situation on Tuesday, writing that she finds Jones’ suggestion that Sandy Hook was a hoax “as personally revolting as every other rational person” and explained why she wanted to feature him on the program.

“Our goal in sitting down with him was to shine a light — as journalists are supposed to do — on this influential figure, and yes — to discuss the considerable falsehoods he has promoted with near impunity,” Kelly wrote.

According to CNN’s Brian Stelter, Kelly and NBC News chairman Andy Lack took questions at the Mirror Awards on Tuesday and said the Jones interview is still on track to air on Sunday. Meanwhile, NBC News’ own public relations guru tweeted a photo of Lack, Kelly and Tom Brokaw from the red carpet of the awards. It’s probably safe to assume that an NBC News publicist wouldn’t have tweeted a photo of Kelly with the network’s chairman if she were in some kind of trouble.

Syracuse University journalism professor and television historian Robert Thompson told TheWrap it is way too early for NBC and Lack to have any remorse about bringing Kelly to the network.

“There are still an awful lot of cards to be played in this NBC, Megyn Kelly game,” Thompson said.

Kelly’s Sunday show isn’t even her primary role at the network, as she is scheduled to host a weekday morning show at 9 am E.T. beginning in the fall.

“There are all kinds of scenarios that could play out in the long run. Maybe this Sunday night show ends up not working but the [morning] show turns into a spectacular success,” Thompson said.

Meanwhile, Jones wouldn’t exactly be the most loathed person to ever be featured on network television. CBS’ “60 Minutes” has a list of “controversial people” that have been featured on the show on its very own website. The names include the Shah of Iran, Ayatollah Khomeini, Roman Polanski, mobster Jimmy Fratianno, Hamas terrorist mastermind Hasan Salameh, Dr. Jack Kevorkian, Timothy McVeigh and hitman John Martorano.

ABC’s Dan Abrams defended Kelly Tuesday on NBC’s morning show rival “Good Morning America,” saying Jones is “incredibly influential” and the “notion that the answer to that is to ignore him is absurd.”

“The key is you have to expose people like this,” Abrams said. “You have to challenge them.”

NBC insiders feels that Kelly has a target on her back from certain groups, including Media Matters, a progressive not-for-profit “dedicated to comprehensively monitoring, analyzing, and correcting conservative misinformation in the U.S. media.”

Media Matters has attacked all-things Fox News for years and still appears to have an issue with Kelly, despite the fact that she walked away from the network. The site recently published an article titled, “Ahead of Megyn Kelly’s NBC Sunday Night debut, here’s the Fox News commentary she wants you to forget.”

Media Matters president Angelo Carusone has arranged advertiser boycotts for programs including “The O’Reilly Factor,” but has no plans to call for a boycott of NBC. Carusone told TheWrap he doesn’t plan on taking action unless Kelly “endorses and embraces” Jones’ conspiracies, but critics feel giving Jones the platform does just that.

“We haven’t even talked to NBC about it yet,” Carusone said before adding that “expectations would be a lot lower” if the interview was scheduled for Fox News instead of NBC.

Media Matters has also published a ton of anti-Jones pieces since the Kelly interview was announced, but an NBC insider feels the criticism is a direct result of Kelly’s involvement, noting that other reporters wouldn’t be facing such backlash.

“She does have a target that a lot of people have drawn on, people who don’t like Fox News and you can see that in some of the reviews of the first episode of her show,” Thompson said. “Certainly, she brings [a history at Fox News] with her to NBC… people are obviously going to put what she does into that historical context.”

The second and most recent episode of “Sunday Night with Megyn Kelly” averaged 3.6 million viewers, a 42 percent drop from her debut, according to TVNewser. The drop is probably because the first episode featured a highly anticipated interview with Russian President Vladimir Putin, according to Thompson.

“That almost always happens,” Thompson said. “One would have expected her debut to get higher ratings that are not necessarily sustainable. A 42 percent drop is certainly not encouraging, but its not enough data to start panicking.”

Critics have bashed Kelly for the notion that she is featuring Jones to help ratings. However, Kelly doesn’t agree with those critics.

“If you let that ratings trap dominate your thinking, you can become handicapped by it,” Kelly told TheWrap during a recent interview. “My own belief is if you do great journalism and compelling storytelling, they will come.”