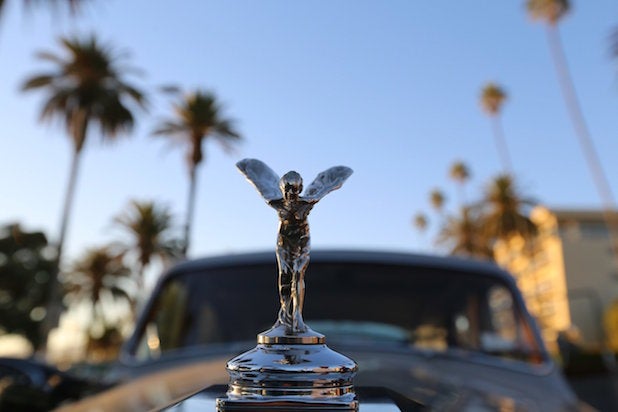 Midway through the making of “The King,” the documentary about Elvis Presley and America, director Eugene Jarecki had a chance to bring the twin obsessions of his film together in a single moment.

And he just couldn’t do it. He couldn’t let Donald Trump sit in the back seat of a Rolls-Royce once owned by Elvis Presley.

Jarecki, a Peabody Award-winning documentary director whose previous films include “Why We Fight” and “The House I Live In,” had acquired Elvis’ Rolls-Royce and was driving it to key cities in the iconic singer’s career: Tupelo, Memphis, Nashville, New York, Los Angeles, and Las Vegas. Along the way, a variety of singers, musicians, writers, actors climbed into the car to talk about Elvis and America – with all of this happening in an election year, as Trump and Hillary Clinton waged a campaign that we glimpsed through Elvis’ windows.

At one point, Jarecki found himself in the same place as the Trump campaign, and says he was told by a campaign staffer that they might be able to arrange for Trump to sit in the car and be interviewed for the film.

“I thought about it, but I could not do that to Elvis’ car,” Jarecki told TheWrap. “I did not want that person to touch the car, in that I believe he and Elvis represent polar opposites in the meaning of America.”

“The meaning of America” is at the crux of “The King,” a moving meditation on the glory and tragedy of Elvis and the way in which it is mirrored by recent American history. The film premiered at the 2017 Cannes Film Festival under the title “The Promised Land,” but was then recut into the version that opened in New York last week and opens in Los Angeles on Friday.

We spoke to Jarecki about the movie, about Elvis and about Trump (whom he has decided not to mention by name) at Sundance in January and again in Los Angeles in June.

The basic premise of  “The King” is pretty crazy: You tell the story of Elvis and of America by driving around the country in Elvis’ Rolls Royce.
When I told my family initially that I wanted to drive Elvis’ Rolls around the country, they were sure that I was having a midlife crisis. Of course, to a degree, I was. I was reaching a point where I had hit a wall in how I think about America, how I think about myself as a person in the country. And I was hitting a wall because the American story is hitting a wall that we all now know.

It’s very clear to us that something has happened to the country we live in. It requires that we stop and look inside ourselves to understand better what has gone on and what has happened to us, in many ways.

I didn’t know that just by jumping in Elvis’ car, that would unfold. But I did know that if I reached out to a broad American family of celebrities and non-celebrities, all kinds of people from all backgrounds, joining in that car with their music, their ideas, their stories, at the very minimum I’d capture a portrait of the nation seen through his window, which I thought was interesting to start with.

Why use Elvis as a metaphor for America?
Elvis is much more than Elvis Presley. Elvis is America on a grand scale. When people ask me, “Where did you get the idea to connect Elvis Presley with America?” I would say, “How did you ever get the idea that they were remotely separable?”

Elvis Presley represents a wide array of American obsessions, loves, fascinations, ambitions, all bundled up into one person. Our contradictions and our ironies and our struggles – everything is in there.

All I started out with was the idea that Elvis was young once, and beautiful, and so were we. And we were also flawed, as he was, as anyone is. As I then started to play with the map of his life, it became a roadmap for the car, because Elvis’ life mirrors the life of America. It starts in the rural, it goes to the small urban ambition of Memphis, it leads to Nashville, where the cultures begin to collide – Southern, Northern, black, white, etc. – and then it goes to New York, the media epicenter of the world, with Elvis as the most famous person in the world at that moment.

I first saw the film in Cannes, when it was a little longer and more focused on the election, and then again in Sundance in its current form. It’s not getting any less timely.
I can say something to you that’s harder to say to anybody else because you were there in both instances. I have gone through a massive metamorphosis with respect to this film since Cannes. When I showed the film at Cannes, in the immediate aftermath of the election, I had this extremely weird feeling that I was there giving almost an autopsy of the American dream.

That had not been the intent of the film. We were making a film about America and what she needs to do to be more like what she wanted to be in her founding documents. But I found myself with this apparent answer coming in that says, “Give up hope, all ye who dream that this is going to get better.” We just took a major step toward having a corporate, oligarchic, predatory, rapacious robber baron sitting in the most hallowed office in the land. It doesn’t look like an improved democracy is coming around the corner.

Now I sit here a year later, and what have I seen in the meantime? We’ve seen the birth of some of the most significant social movements in my lifetime. #MeToo, Time’s Up, the Parkland students, the teacher walkouts in several states that got better conditions, the protests that are now underway to block the administration’s decision to create juvenile concentration camps in this country, mayoral uprisings in the sanctuary cities, people going to airports to protest the immigration bans – everywhere you look, Americans who were asleep in what felt like rosier times are suddenly awakened because a real logo of evil is sitting at the helm of the ship of state.

It is unbelievably inspiring to watch the public express a democratic muscle and say, “I’m here, and you will not do this on my watch.” That’s an incredible development that’s happened in this last year, and it’s changed entirely how I see the function of the film as it reaches audiences. We are not out of hope. We’re just in a place where democracy is proven by what one does to fight for it.

Do you think it made the metaphor of Elvis’ and America’s decline more potent that the film ended with the election of Donald Trump?
Yes, and yet the worst thing that somebody could do is imagine, as has been said to me sometimes, that that man is somehow related to Elvis. He is the enemy of Elvis. The forces that he represents are what unraveled everything that was beautiful about Elvis: the commercialization of American life, where everything is for sale, the vulgarization of American life … He is an embodiment of everything that destroyed Elvis. He doesn’t belong on the same planet with Elvis Presley.

For all your passion and anger on the subject, there is less Trump in the current version of “The King” than there was in the Cannes version.
Yes. It was more shocked by him then. I was still, like so many people, wrestling with what does this mean? And so when you do not know what something means, you tend to be less efficient with it in your movie.

He’s very toxic. He sort of tarnishes every scene you put him in, and there are certain people I didn’t want him near. And, you know, a little of him goes a very long way, as we’ve found out as a society. And it’s no different in the movie.

Also Read: David Lynch Walks Back Trump Comments in Open Letter to POTUS: 'It Was a Bit Out of Context'

You find a real grace note at the end of the movie with a remarkable performance of “Unchained Melody” from one of Elvis’ last shows, which is the backdrop to a powerful sequence of images of America. Elvis is a wreck physically, bloated and sweaty, but the power of his performance is such that at that point we can embrace the metaphor and even find a little bit of hope.
If that’s what reached you about it, it’s very gratifying to me. Because Elvis’ performance of “Unchained Melody” was the first thing I saw that made it absolutely clear that I had to make the film. It was because of this young, beautiful boy looking at me every time he looks at the camera, trapped inside the body of this transmogrified, capitalistic disaster.

I think the American people are in that look. We’re just trapped here in the machine trying to get out, but everybody works too hard, it’s too hard to put kids through school and deal with mortgages and college payments … Everything is too much. So the idea of being able to break out of this bloated disaster that we’ve been facing is very hard.

And until I saw that “Unchained Melody,” I didn’t have a spiritual communication for the viewer about where hope was. Hope lies in the indefatigable spirit that’s trapped within that tragic figure that Elvis becomes.

Elvis had that glorious moment with “Unchained Melody,” and then weeks later he was dead. Are you more optimistic about the ending for America?
I think we’re seeing greater democratic health in the way the public has become engaged in the shaping of our future than we’ve had in my lifetime. That’s a huge development. Will it be too little too late? Has the damage been done? We are in a place where the environmental issues themselves might be too far gone for us to catch up with it. History will answer that for us.

But in the meantime, I think we have our work cut out for us just to make today more dignified, to make today more fulfilling of our first principles. I’m encouraged and inspired. I have guarded optimism, seeing these motions of democracy that have emerged in reaction to this political era.

There are so many ways in which we are shouting back to say, “No, we haven’t given up! We’re still here, trapped inside this big jumpsuit!”