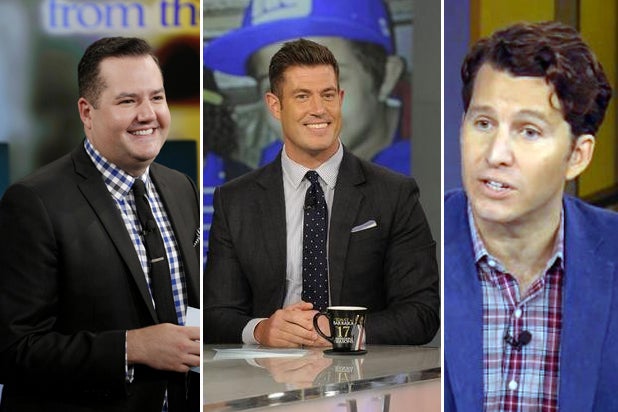 “The View” could be embarking on its most exciting season ever as ABC and show producers consider male co-hosts.

Last week, the daytime talker cleaned house by kicking Jenny McCarthy to the curb after just one season and failing to come to agreement on a contract renewal with seven-season veteran Sherri Shepherd.

With the panel stripped down to just co-host Whoopi Goldberg for next fall, the question is what the show will do next.

Amid the carnage, ABC issued a statement: “The View will be moving in an exciting new direction next year and ABC has made decisions to evolve the show creatively.”

It would make sense as the show has had male guest co-hosts over the years and heavily rotated men into Hasselbeck’s vacant spot for the past month or so, as though it were testing the viability of a permanent male host.

The New York Times reports that among the top prospective candidates are E! personality Ross Mathews, whose five pre-taped episodes on “The View” are currently airing amid the controversial exits; ESPN/ABC football analyst Jesse Palmer, who co-hosted about a month ago; and conservative talk show host Will Cain, whose views stirred up some trouble with the women when he co-hosted in mid-June.

Talk of men joining the show permanently has been in the ether for months. Back in May as Walters was retiring from the panel (although she stayed on as an executive producer), she floated the idea during an interview.

“‘The View’ is entering its 18th year. I thought when I created it, the show might last two years,” she recalled to Extra. “These women are wonderful, and I don’t know, maybe, maybe we’ll add a man… ah, what a thought.”

She then teased: “I think we’ll try some different people, and I think it would be nice to add a man, stay tuned.”

While the show is still a ratings winner – averaging 3.2 million viewers, experiencing  a 1 percent drop over the last year – it’s the competition that may be driving “The View’s” changes. In the last year, CBS’s “The Talk” has narrowed the gap between the two shows by half.

Mathews hasn’t been approached by ABC regarding a permanent position, according to an individual with knowledge of the situation. Mathews’ and Palmer’s representative declined to speak at this time. And Cain didn’t immediately respond to our request for comment.