Why is Chris Evans Buzz Lightyear when Tim Allen has long voiced the character audiences know and love? There’s a very simple answer: they aren’t technically voicing the same character.

Writer-director Angus MacLane is categorizing Pixar’s 26th film, “Lightyear,” as a “sidequel” to the “Toy Story” franchise. In an interview with Yahoo, McLane discussed the decision to cast Evans in the role, explaining that the upcoming film’s premise — which isn’t about the Buzz Lightyear toy from the “Toy Story” films, but the movie that toy is based on — has begun to confuse audiences, and that the inclusion of Tim Allen as the “original” Buzz Lightyear would just “add to the confusion.”

“Toy Story’s” beloved space ranger action figure was voiced by Tim Allen in the first four installments, but Allen was not approached for this “sidequel.” MacLane explains that Buzz the action figure, voiced by Allen, “is a little goofier and is a little dumber, and so he is the comic relief. In this film, Buzz is the action hero. He’s serious and ambitious and funny, but not in a goofy way that would undercut the drama.”

But who could play the serious action star? MacLane reveals why it had to be Chris Evans. “Chris Evans has the gravitas and that movie-star quality that our character needed to separate him and the movie from Tim’s version of the toy in ‘Toy Story.’” 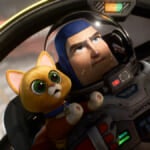 Ahead of “Lightyear’s” Friday premiere, the replacement of Tim Allen as Buzz became a trending topic after actress Patricia Heaton tweeted that Pixar is “castrating” the character by casting Evans rather than Allen.

Following Heaton’s tweet, the film’s creators clarified that bringing back Allen as Buzz Lightyear “would add to the confusion,” according to producer Galyn Susman. “People were having a hard enough time wrapping their heads around this. So really we needed the toy in the ‘Toy Story’ universe to be its own thing. Tim Allen is Buzz Lightyear the toy. Chris Evans is Buzz Lightyear, the superhero from that movie that inspired the toy.”

MacLane goes on to explain the difference between the films and their respective Buzz Lightyears. “The tone is a lot different. Tim is hilarious, but this character wouldn’t work as well with him doing the Space Ranger voice. It would not be as emotional. It just changes the tone of the movie. We were going for more of a classic sci-fi film,” concludes MacLane.