“Shang-Chi and the Legend of the Ten Rings” introduced a whole lot of comic book lore to the MCU, but it also brought in a completely original character, Katy, played by Awkwafina. And, by the end of the movie, it’s hard not to wonder if Disney+’s “Hawkeye” series is her next stop.

That’s because by the end of the movie, though she started as a (unusually skilled) driver, Katy is apparently on her way to becoming an expert archer. Having only trained for a few days in Ta-Lo, she’s able to precisely fire an arrow into the throat of the prime Soul Stealer, saving her best friend and his sister, and by extension, Ta-Lo itself.

And if there’s one inevitable truth about the MCU, it’s that as soon as someone picks up a bow and arrow, viewers’ minds are going to go immediately to Jeremy Renner’s Hawkeye. That’s because he’s been the only archer in the MCU — though not for long, as his Disney+ show will introduce Kate Bishop in November, played on-screen by Hailee Steinfeld.

So, just going based on what we know — the person who trained her how to use a bow died in the battle at Ta-Lo and now she’s in the market for a new teacher — — it would make sense for Katy to show up in “Hawkeye” too. Hawkeye is after all apparently taking on students (though we admittedly don’t know if he’s training Kate willingly). 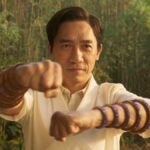 Also Read:
Does ‘Shang-Chi’ Have a Post-Credits Scene?

In Marvel Comics though, there are plenty of characters who are skilled with a bow and arrow; we just haven’t met any of them in the MCU yet. It’s entirely possible that Katy will eventually adopt a familiar moniker, similar to how J.A.R.V.I.S. eventually turned into Vision.

Just because Katy is now an archer, it obviously doesn’t mean she has to become a Hawkeye sidekick (or indeed that she should). Hey, maybe Shang just needs a friend who’s also coming into her abilities while on his journey to becoming a hero, something that could be hashed out in the sequel.

It’s also entirely possible that the MCU simply wanted to show that archery is a useful skill, given how often Hawkeye has become the butt of the joke over the years. There’s been more than one sketch about him being “the most useless Avenger” on SNL.

At this point, Awkwafina hasn’t officially been confirmed for any other specific Marvel projects. She’s almost certainly going to return though, given how “Shang-Chi” wraps things up. Where exactly she’ll pop up is anyone’s guess; it could be Hawkeye. It could also be something totally different. We’ll just have to see.