Will Ferrell, Jamie Foxx and Will Forte are set to star in the live-action adult comedy “Strays” at Universal, according to an individual with knowledge of the project.

Josh Greenbaum, who broke out recently with his directorial debut “Barb and Star Go to Vista Del Mar,” is attached to direct “Strays.”

“Strays” is written by Dan Perrault (“American Vandal”) and follows the story about an abandoned dog who teams up with other strays to get revenge on his former owner. 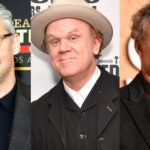 “Strays” is based off an original idea by Perrault and was packaged by Picturestart, which approached Greenbaum and producers Louis Leterrier (“Lupin,” “Now You See Me”), Academy Award winners Phil Lord and Chris Miller (“Spider-Man: Into The Spider-Verse”) and Lord Miller President of Film Aditya Sood (“The Martian,” “Cocaine Bear”) about partnering together on the project.

Universal picked up “Strays” from Picturestart and Lord Miller in a preemptive situation earlier this year. The film falls under Lord Miller’s pact with Universal which has a rich first look deal with the studio.