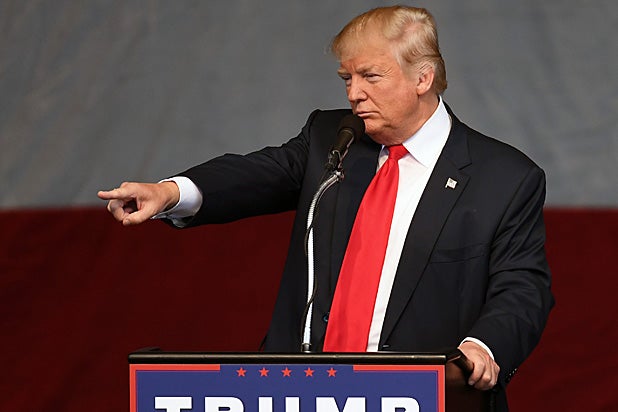 If you followed Donald Trump’s Twitter feed — and no other source of information about American life — you might think the greatest threat to our nation is the New York Times.

Since his election a week ago, Trump has tweeted nothing about ISIS, or about supporters who have carried out bigoted attacks in his name. But he has griped three times about the country’s leading newspaper, and once about “the media” in general, when he accused it of inciting “professional protestors.”

He later offered conciliatory words for “small groups of protestors” — but not for reporters. Though he has courted journalists since he was a teen, has also tried to bully and intimidate them. He regularly pointed out reporters at his campaign rallies to rile up his crowds. He said he wanted to “open up” libel laws to make it easier to sue journalists.

But what, if anything, can he actually do? How much of a threat could he pose to the First Amendment?

The amendment states that Congress “shall make no law respecting an establishment of religion, or prohibiting the free exercise thereof; or abridging the freedom of speech, or of the press; or the right of the people peaceably to assemble, and to petition the Government for a redress of grievances.”

So far, Trump has used his own First Amendment rights to criticize a newspaper and “the media,” as well as protestors who were expressing their right to peaceably assemble, while petitioning for the redress of grievances. The Constitution doesn’t give him the freedom to do anymore than complain — as a citizen, or as a president.

But that doesn’t mean he’s harmless.

“Candidate Trump threatened to open up libel laws to take news outlets to court, and while a long shot, First Amendment lawyers have said the president-elect could find ways to chip away at it. Candidate Trump threatened to sue newspapers or journalists more than a dozen times during the campaign. Candidate Trump told The Washington Post he will be bringing more libel suits against the press,” continued Deutsch, a veteran of Sports Illustrated. “One should take the President-elect at his word until his actions show otherwise.”

Others say there just isn’t very much Trump can do.

Attorney Bryan Sullivan, a crisis management guru who has dealt with libel lawsuits, said Trump won’t be able to change the Constitution. He said the only thing reporters need to worry about is the threat of libel lawsuits — and that good reporters will be safe.

“Honestly I really don’t think there really is much of a worry. If reporters do their jobs the way its supposed to be done, they shouldn’t have anything to worry about,” Sullivan told TheWrap.

In an essay this weekend in the New York Review of Books, journalist Masha Gessen, who has reported extensively from Russia, argued that Trump doesn’t need to prosecute reporters to neuter them. She wrote:

The national press is likely to be among the first institutional victims of Trumpism. There is no law that requires the presidential administration to hold daily briefings, none that guarantees media access to the White House. Many journalists may soon face a dilemma long familiar to those of us who have worked under autocracies: fall in line or forfeit access. There is no good solution (even if there is a right answer), for journalism is difficult and sometimes impossible without access to information.

Vanderbilt University’s First Amendment Center Ombudsman David Hudson said journalists should worry about “transparency, or lack of transparency” with any new administration. But he thinks a lot of Trump’s threats are “rhetoric” not reality.

“It’s hard to distinguish certain bombastic statements with what will actually happen,” Hudson told TheWrap. “If you have an administration that is overly sensitive to criticism, that may not bode well for the First Amendment. … But I don’t think [Trump] is going to be the great evil to the press that some have speculated. I don’t see it that way.”

Trump has a complicated relationship with the press. He told a biographer how thrilled he was, as a youth, to read about his performance on the baseball field:

And I said, “I love it.” I loved it. It was the first time I was ever in a newspaper. I was a young kid, right? I was probably a sophomore in high school. I don’t think there’s anything wrong with that. I thought it was amazing. … It felt good.

He clearly likes some news organizations. He hired his chief strategist, Steve Bannon, from the conservative site Breitbart.

But his interest can also seem like a fixation — like when he accused the New York Times this week of “very poor and highly inaccurate coverage.” Doesn’t a man who needs to choose a cabinet and lead the free world have anything more important to do?

“Both a free press and the freedom to assemble are enshrined in our Constitution and it seems odd that a newly elected president would choose to criticize both two days after an historic electoral victory,” she told TheWrap.

She doesn’t think Trump will be able to curb the laws that protect our free press, but thinks “mainstream journalists who report on our next president should expect consistent criticism” from Trump.

“The good news is that brave and smart editors like Dean Baquet at the New York Times and Marty Baron at the Washington Post will never back down, even while a president or president-elect attacks their coverage or motives,” Pickert said. “In the years ahead, I would not be surprised to see better and more aggressive presidential press coverage than ever.”