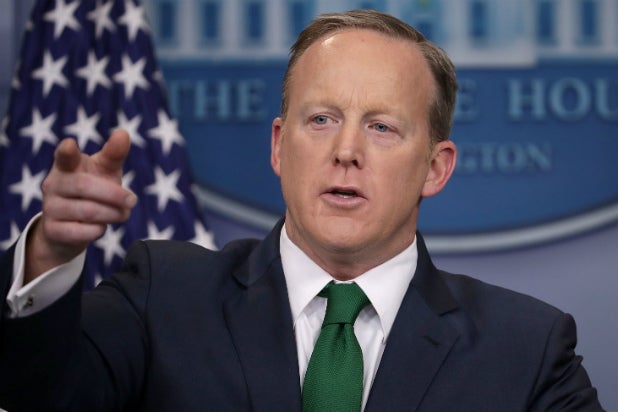 Even Sean Spicer’s harshest critics agree that he has a tough job: relaying what’s on President Trump’s mind, when Trump could change his mind at any moment.

But the fact that Spicer hasn’t conducted an on-camera briefing since June 20 as many Washington watchers wondering if he will ever hold one again.

The last on-camera White House press briefing was back on June 29 and deputy press secretary Sarah Huckabee Sanders conducted it instead of Spicer. Though Spicer appeared in the James S. Brady Press Briefing Room on Monday and addressed reporters for the first time since June 28, it was off-camera.

“This is not an accident. What the White House is doing is working to kill off the daily press briefing,” Cillizza wrote on Monday.

Whether Spicer will keep his job is up to one man.

Trump noted approvingly in April that Spicer “gets great ratings.” He said a month later, “He’s doing a good job but he gets beat up.” Trump told Fox News host Jeanine Pirro in May.

Since then, Spicer has been the subject of endless speculation.

The congressional newspaper The Hill reported in May that Spicer was the “latest target for Trump firing rumors.”

Last month, Politico reported that Spicer was reaching out to prospective candidates to take over his position as part a plan to shake up the White House communications operation. Conservative talk-radio host Laura Ingraham and Daily Mail U.S. political editor David Martosko were in talks to join the communications team, the report stated.

The White House did not immediately respond to TheWrap’s request for comment.

From the first day of the Trump presidency, when Spicer berated reporters for their coverage of inauguration turnout, his combative press briefings were entrancing.

Critics have challenged his credibility (he once tried to convince reporters that Trump’s “covfefe” tweet wasn’t a typo) and and even ability to dress himself (he once wore an American flag pin upside-down, a symbol of distress). He mistakenly said that Adolf Hitler never used chemical weapons on his own people.

Melissa McCarthy satirized him in “Saturday Night Live” sketches in which he rode a podium like a tank through a battlefield. CNN White House correspondent Jim Acosta has accused him of “stonewalling” and called him “useless.” His colleague, Steve Bannon, paid him the disrespect of saying he hadn’t been on camera lately because “Sean got fatter.”

But others go out of their way to say they like Spicer personally — even a journalist who last month spoke out at a press conference to accuse the Trump Administration of bullying reporters. And journalists offered their sympathy — at least some of it authentic — when Trump excluded him from a group of staffers who met with Pope Francis.

Spicer isn’t just the press secretary. He is also responsible many of the behind-the-scenes duties of the White House communications director. Is he too busy for on-camera briefings? Has the president lost faith in him?

Only Trump knows. And he could change his mind at any time.