While accepting his Oscar for Best Actor, Will Smith apologized to the Academy and to his fellow nominees for striking presenter Chris Rock on the stage of the Dolby Theatre.

Smith did not directly apologize to Rock, but he made a comparison to his character Richard Williams in “King Richard” by saying that the father of Venus and Serena Williams was a “fierce defender of his family.”

He continued: “I’m being called on in my life to love people and to protect people and to be a rigor to my people. I know to do what we do, you got to be able to take abuse, you have to be able to have people talk crazy about you. You got to be able to have people disrespecting people, and you gotta smile and pretend like that’s OK,” Smith said. “And Denzel said to me a few minutes ago, ‘At your highest moment, be careful, that’s when the Devil comes for you.’ I want to be a vessel for love. I want to say, thank you to Venus and Serena … I want to thank them for trusting me with their story. I want to be an ambassador for that kind of love, care and sure.” 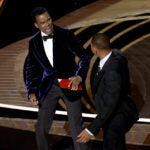 Earlier in the evening, about halfway through the show, Smith attacked Chris Rock on the Oscars stage after the comedian made a joke at Jada Pinkett Smith’s expense. The “King Richard” star stormed onto the stage after Rock suggested that Pinkett Smith, who has alopecia, should star in a “G.I. Jane” sequel due to her bald head.

“Will Smith just smacked the s— out of me,” Rock said to the audience, in a slight state of disbelief.

“Keep my wife’s name out your f—ing mouth,” Smith yelled in response, to which Rock tried to defend himself, saying: “Wow, dude, it was a f—ing ‘G.I. Jane’ joke.” 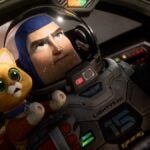 Smith then repeated himself, yelling again: “Keep my wife’s name out your f—ing mouth.”

“I’m going to, OK?” Rock replied. “That was the greatest night in the history of television.”

Smith concluded his Oscar speech by thanking the Williams family and the Academy and adding, “I’m hoping that the Academy invites me back.”

Rock has a bit of a history of making jokes at Pinkett Smith’s expense during the Oscars. Both she and Smith boycotted the 2016 awards after no actors of color were nominated for the second year in a row, leaving them open to criticism from the comedian when he hosted the show. “Jada [Pinkett Smith] boycotting the Oscars is like me boycotting Rihanna‘s panties. I wasn’t invited,” Rock said six years ago.