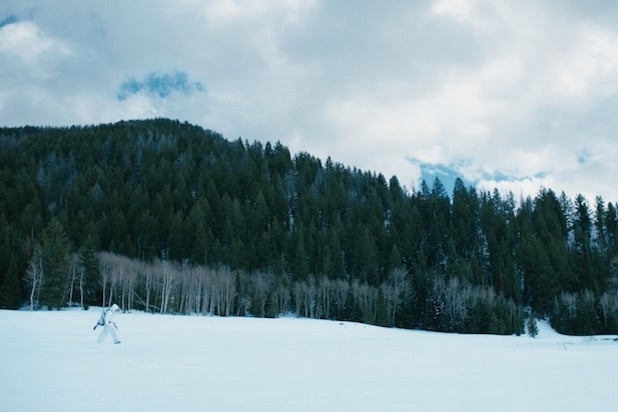 Courtesy of the Sundance Institute

The snowstorm that blanketed Park City for most of Saturday combined with the women’s march to make it one of the toughest days ever to navigate the festival. But it also set the tone nicely for “Wind River,” the directorial debut of “Hell or High Water” screenwriter Taylor Sheridan and a topnotch drama that he might as well have titled “Hell or High Snow.”

Set on a Native American reservation in Wyoming, “Wind River” takes place almost entirely in frigid snowscapes, as FBI agent Jane Banner (Elizabeth Olsen) enlists the help of local game tracker Cory Lambert (Jeremy Renner) to find the killer or killers responsible for the rape and murder of a teenage girl whose frozen body is found in the snow.

Sheridan is currently riding high with the awards buzz for “Hell or High Water,” in which he captured the damage that big banks have done to the U.S. middle class in the context of an exciting crime thriller. And “Wind River” goes down that same path, to a degree: On the surface a tense investigative piece with Renner as a regular Sherlock of the snow, it also slipped in cogent and damning points about the limitations and dead ends virtually forced on many residents of Native American reservations.

And they’re forced on the characters in this movie, too. When Olsen’s Jane, before heading into a dangerous situation, asks the reservation’s police chief (the always great Graham Greene), “Shouldn’t we wait for some backup?,” his reply is weary and succinct: “This isn’t the land of backup, Jane. This is the land of ‘you’re on your own.'”

But for all the points it makes, “Wind River” feels like even less of a political movie than “Hell or High Water” did. If that film was a coded state-of-the-union message, this one is more about the state of the heart.

Cory is clearly obsessed with helping the naïve (and initially underdressed) Jane track down the men responsible for the girl’s death, and we quickly find out why: His own teenage daughter was found dead in the snow years earlier, a blow from which no father can ever truly recover.

In many ways, the most devastating scenes are intimate conversations between Renner and Olsen or Renner and Gil Birmingham, playing the father of the dead girl. Cory is all but consumed by his personal loss, and he can barely look at the people he’s talking to, but his words about loss and recovery are profoundly moving, and Renner catches every nuance in what may well be his best performance since “The Hurt Locker.”

For much of its running time, “Wind River” is a quiet, meditative crime drama, and a wonderfully effective one, aided by haunting music by Warren Ellis and Nick Cave.

And then, quite suddenly, it isn’t that at all. In a startling twist, the investigation suddenly becomes an explanation; while the audience is watching to see how Cory and Jane will find answers, Sheridan suddenly gives us all of those answers in a sustained blast of hellish violence.

The shift is jarring, which shouldn’t be unexpected when you consider that this is Sheridan’s directorial debut. Perhaps “Hell or High Water” director David Mackenzie negotiated the tonal shifts of that movie a little more deftly than Sheridan does with the ones in this movie – but to be fair, it’s supposed to be jarring, and the balance that was deliberately upended is restored by the time the movie comes to an affecting and satisfying ending.

The Eccles Theatre audience responded warmly, and in a post-screening Q&A Renner in particular seemed to have been deeply moved. He tried to joke that his approach to playing the character was “Just don’t suck, Renner,” but he also choked up several times as he talked about the character. “I can’t even say a sentence without getting weepy,” he finally confessed.

For his part, Sheridan insisted that his films are inspired by “a lot of red wine, really sad country music … and some self-loathing.” But then he, too, got serious about what he was trying to accomplish.

“At the root of it, I’m trying to discover who we are,” said Sheridan. “Some of it is pretty shameful, and some of it is beautiful.”

And “Wind River” goes straight down the path suggested by that quote. It lays out the shame, but it also reaches for and finds the beauty.