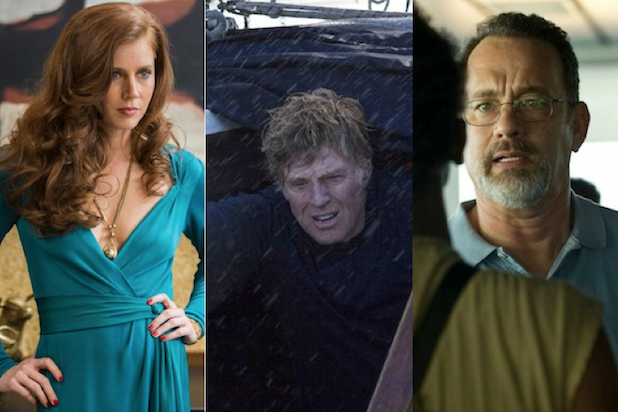 The Hollywood guilds have spoken. Now what?

On Tuesday, the Directors Guild of America became the last of the four major guilds to release its nominations for the best film achievements of 2013.  It followed the Writers Guild and Producers Guild, whose nominations were announced last week, and the Screen Actors Guild, who revealed their candidates in December.

DGA, PGA, WGA, SAG … it’s an alphabet soup of enormous importance in figuring out what Oscar voters might be thinking. Let’s face it: It’s good for “12 Years a Slave” to be the biggest winner among critics’ awards, but far more important that guild voters, many of whom are also in the Academy, have embraced it as well.

So now that the guilds have weighed in (with the American Society of Cinematographers, the Art Directors Guild, the American Cinema Editors and others yet to go), who are the winners and losers?

Also read: Ellen DeGeneres Gets All Tuxed Up in First Oscars Promo (Video)

Well, the only two films to be nominated by all four of the major guilds are “American Hustle” and “Captain Phillips.”

But “12 Years a Slave” was nominated by the DGA, PGA and SAG and was ineligible for a WGA Award, though it undoubtedly would have been nominated if it had qualified. So you can’t really hold that against it.

And “The Wolf of Wall Street” didn’t receive any SAG nominations – but Martin Scorsese finished it so late that Paramount couldn’t send screeners to the SAG Nominating Committee, putting it at a distinct disadvantage.

Among the films that scored nominations with three of the four guilds, “Wolf” and “Slave” are joined by “Gravity,” “Nebraska,” “Blue Jasmine” and “Dallas Buyers Club.”

“Saving Mr. Banks,” “August: Osage County” and “Her” were nominated by two of the guilds, while “The Butler,” “Rush,” “Philomena,” “Before Midnight,” “Enough Said” and “Lone Survivor” each have a single guild behind them.

And the Coen brothers’ poor “Inside Llewyn Davis” is as out in the cold as its title character, without a single guild nod despite a handful of critics’ awards and a Twitter endorsement from the New York Times.

Also shut out: “Fruitvale Station,” “All Is Lost,” “Labor Day” and “Prisoners,” among others.

Now, that doesn’t mean that all is lost for “All Is Lost” and its fellows – but since the Academy moved to 10 nominations in 2009 (and then a variable number two years later), only three of the 38 Best Picture nominees got there without having been nominated by at least one of the guilds.

(Those three were “Extremely Loud and Incredibly Close,” “The Tree of Life” and “Amour.”)

So as the dust clears from the guild nominations, here’s how I see things standing:

Top three: “12 Years a Slave,” “Gravity” and “American Hustle.” Nobody really expected “Gravity” to get a WGA nomination, and films have won Best Picture without a writing nomination. (None since “Titanic” in 1997, but it has happened.)

Next two: “Captain Phillips” and “The Wolf of Wall Street.” The guilds have made it clear that both have solid across-the-board support.

Looking good: “Nebraska.” Of the “smaller” movies – “Nebraska,” “Her” and “Inside Llewyn Davis” – Alexander Payne’s black-and-white road picture seems to have the surest awards foothold.

Also read: Inside the 10-Year Odyssey to Make ‘Nebraska’ With Alexander Payne

Moving up: “Dallas Buyers Club” and “Blue Jasmine.” They were once considered strong in acting categories but longshots for best picture – but those PGA and WGA nominations for both films are telling.

Might be moving up, though it’s hard to say: “Philomena.” Anecdotal evidence says Oscar voters love this movie. Guild results don’t show it. The jury’s still out but a surprise is possible.

In a holding pattern: “Her” and “Saving Mr. Banks.” The former is beloved by critics and embraced by the producers and writers, without ever seeming to break through to the upper echelon. The latter seems likely to appeal to voters, and it did land PGA and SAG nods.

Relying on the preferential vote: “Inside Llewyn Davis.” Only the Academy nominates using a system in which it’s better to be loved by a few than liked by many. That system helped the Coen brothers’ “A Serious Man” in 2009, and it’s the one thing that their new film has going for it.

Relying on the actors: “Lee Daniels’ The Butler” and “August: Osage County.” Guild results haven’t been entirely kind to these two films that once seemed to be Best Picture contenders, although “August” broke into a skimpy adapted-screenplay field at the Writers Guild. But both landed SAG Ensemble nominations – and because of that, hope springs eternal.

Looking for something to rely on: “All Is Lost.” J.C. Chandor’s one-man-at-sea movie couldn’t even snare a SAG nomination for the one man, Robert Redford. Will enough Oscar voters pick up the screener (or, far better, go to a theater) and realize how good it is?

At this point, it feels as if the three films that actually have a chance to win are “12 Years a Slave,” “Gravity” or “American Hustle.” But I can tell you why each of the three won’t win:

Obviously, one of the films that won’t win will find a way to prove me wrong, or a different film that I’ve underestimated even more will do the same thing.

So the season marches on, with a flurry of events that probably won’t provide much clarity: the Golden Globes on Sunday, the Critics’ Choice Movie Awards four days later, the SAG Awards on Jan. 18.

In fact, we’ll have to wait for the Producers Guild Awards on Jan. 19. That’s when we’ll get an idea of who the year’s real winner might be.