Newly converted into IMAX 3D for a one-week theatrical run following two miraculous restorations on home video over the past decade, “The Wizard of Oz” celebrates its 75th anniversary looking younger and more vital than ever, simultaneously advertising good old-fashioned storytelling and the most advanced technology available.

If the true joy of getting swept away by fantasy is fast becoming a cinematic rarity, “Oz” recalls a time when such experiences were the rule rather than the exception. Chock full of Midwestern charm, writ large with stunning production design and brought to life through deservedly iconic performances, the 1939 classic endures in a way that few others films have, mostly because its childlike sense of wonder isn’t merely timeless, but infectious.

And while Warner Bros.’ frame-by-frame restoration reveals every minute detail about the makeup, costumes and sets, what’s remarkable about “Oz” is how absorbing it is. From the freckles on Judy Garland‘s cheeks to the sculpted hairstyles of the Lollipop Guild to the Jell-O powdered horses of Emerald City, everything has a wonderful tangibility, even when it’s hopelessly fake – which somehow makes it all more believable when brought together against the backdrop of L. Frank Baum’s fantastical ideas. 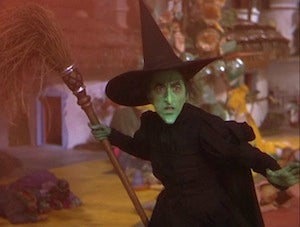 Warner engages in no trickery to make the sepia-tone portions of the film conspicuously flatter than their Technicolor counterparts, instead creating a consistent, tactile and fully digestible sense of depth. “Forgettability” seems like an unattractive quality for 3D presentation, but in this case it’s a virtue, because the subtlety of the conversion — paired with the enormity of the IMAX screen — provides an immersive experience that truly does make you feel like you’re off to see the wizard, right along with Dorothy and her companions.

The 3D notwithstanding, Victor Fleming’s opus exudes the kind of imagination that filmmakers today have sadly reduced to the stale rhythms of a hero’s journey, shrouded in mechanical precision. More than simply concocting a fairy-tale world that subjects the audience to visual overload, (credited) writers Noel Langley, Florence Ryerson and Edgar Allen Woolf give Dorothy’s quest a sweetness and an emotional clarity that feels impossible to resist.

Moreover, the chemistry of the four leads is positively spellbinding — Garland’s heartbreakingly naivete as Dorothy plays perfectly against the scrappy vulnerability of Ray Bolger’s Scarecrow, Jack Haley’s Tin Man and Bert Lahr’s Cowardly Lion. But ultimately, as a display of technical virtuosity — both in its original conception and its recent conversion — or just a reminder of the beauty and power of bona fide moviemaking magic, there’s nothing that compares to its power.