Everybody in Hollywood in the 1980s and ‘90s wanted to go to Wolfgang Puck’s restaurant Spago, which featured an open kitchen with a wood-burning stove made for serving up fancy pizzas. Puck rode that initial success to a sort of food empire, often at some cost to his personal life, and that makes up the narrative thread of “Wolfgang,” a documentary directed by David Gelb, who also made the very popular food-based doc “Jiro Dreams of Sushi.”

The most impressive element of “Wolfgang” is the amount of ground it manages to cover in 78 minutes without ever seeming to rush over anything. Gelb takes time to linger for a few key moments over Puck looking for fresh fruits and vegetables -- which was an innovation in the LA of the 1980s -- and also over the concentration Puck brings to cooking itself, which seems to bring the legendary chef contentment that other aspects of his life do not.

The Rosebud-was-his-sled of this movie is a recipe for Wiener schnitzel that Puck’s mother used to make for him in his native Austria, and cinematographer Will Basanta ("Chef's Table") makes this dish look particularly luscious in his widescreen frames as Puck squeezes some lemon juice over it. The young Puck grew up poor, without indoor plumbing, and he hated his stepfather, who constantly belittled him. “As a kid, the kitchen was the only place I felt safe,” Puck says. 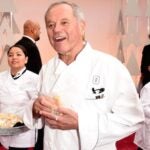 Puck escaped from his stepfather and took a job in a hotel restaurant; so determined was he to make a success of himself that, after getting fired from this restaurant for running out of mashed potatoes, he turned up the next day and insisted on continuing, which led to him being transferred to another hotel. He went on to study in France and did not contact his family for a year and a half, causing them much heartache.

We see Puck visiting his sister in this movie, and she talks about how their dying grandmother desperately wanted to see Wolfgang one more time when he was off in France. Late in “Wolfgang,” his sister brings this up with him when they are visiting a cemetery where family members are buried, and he awkwardly says that there was trouble with getting to a phone; his sister doesn’t seem to take this too well. 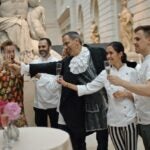 Puck moved to California to seek his fortune, and he turned around the restaurant Ma Maison, making it into a place all of Hollywood wanted to go because he rejected frozen ingredients and insisted on fresh produce. “Wolfgang” sets him up as the first celebrity chef, and that is basically true, though Gelb might have mentioned the influence of Alice Waters at her restaurant Chez Panisse in the 1970s in Berkeley.

Patrick Terrail, the manager of Ma Maison, wasn’t paying Puck all that much and didn’t give him credit for revitalizing the restaurant, and in an interview in “Wolfgang,” he still is loath to give Puck much credit. Puck finally had to see Terrail as another stepfather figure to rebel against, but only after Puck's then-wife Barbara Lazaroff pushed him to stand up for himself and to leave Ma Maison to create his own restaurant. 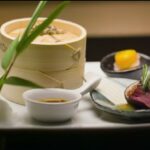 Lazaroff and Puck were a real team when they created Spago, and it was her theater background that made her think to make the space itself into a kind of playing area where the starry customers could see their food being made. The creation of one of Puck’s signature dishes came about by accident when he ran out of brioche to go with smoked salmon and was faced with “Dynasty”-era Joan Collins, who particularly wanted that dish. “You don’t want to make Joan Collins mad,” Puck notes, and he remembers how he instead piled the salmon onto pizza dough and served it with some caviar and without cheese or tomatoes, which was unusual then.

His marriage to Lazaroff ended in divorce, and as he became more and more of a star and brand on television, Puck saw less and less of their two sons. “Wolfgang” is set up to confront Puck with regret over some aspects of his personal life, which he sacrificed to his professional ambition, but he handles this gracefully. One of his sons from his first marriage is now a chef himself.

At the end of “Wolfgang,” after Spago has moved from West Hollywood to Beverly Hills, Puck puts his mother’s Wiener schnitzel on the bill of fare as a reminder of the past he has spent his life escaping, and though at first it doesn’t seem to fit with everything else on the menu, it soon becomes a favorite with diners, which makes for a culinary happy ending.