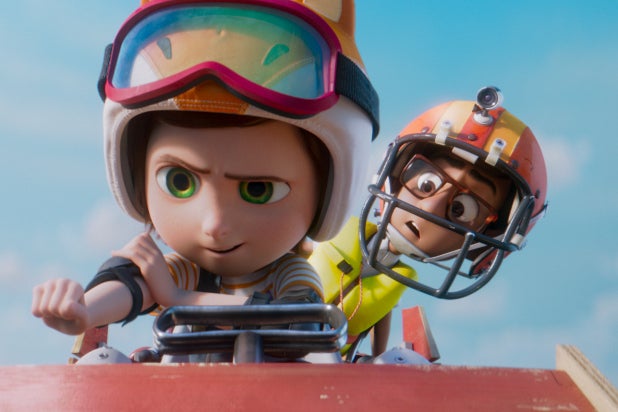 “Wonder Park” stars Brianna Denski as June, a young girl who spends her off hours — which seems to be most hours — concocting an elaborate, fictional amusement park with her mom, voiced by Jennifer Garner. (Because, in movies, Jennifer Garner is practically everyone’s mom.) Their creation, Wonder Park, is a gigantic feast for the senses, with amusingly stomach-churning rides that literally toss you across the park, or come to life underneath you and fly around magically.

June and her mother fill the house with clockwork miniatures and complicated blueprints, but then her mom gets deathly ill and has to go away to a special hospital. (Never mind what she’s got, how curable it is, or how far away she’s going.) So June decides to put away all her amusing things and instead devote every waking minute to taking care of her dad (Matthew Broderick), because in her head he’s more accident-prone than Wile E. Coyote.

Eventually, June is so far down this compulsive rabbit hole that she runs away from her summer camp to head back home and stop dad from (presumably) burning the whole house down, but along the way she wanders into the real-life Wonder Park, populated by all the mascots she invented with her mom, like responsible warthog Greta (Mila Kunis), safety inspector porcupine Steve (John Oliver), technician beavers Gus (Kenan Thompson) and Cooper (Ken Jeong), and sleepy greeter bear Boomer (Ken Hudson Campbell).

That’s a heck of a lot of legwork to get to the film’s core premise — a little girl wandering into her own fantasy land — only to find that it’s been overrun by her adult anxieties run amok. The whole park has been infested with Chimpanzombies who want to destroy every monument to June’s relationship with her mother, just like June wanted to throw Wonder Park away in a fit of maladaptive grief. Now it’s up to June and her animal friends to overcome their fears and to find a way to save the park and, by extension, June’s creative spirit.

“Wonder Park” is hardly the first movie to explore the unfortunate side-effects that growing up can sometimes have on someone’s psyche, but it’s nowhere near as disturbing as “Return to Oz” nor nearly as trite as “Christopher Robin.” Because the story in “Wonder Park” is original, the filmmakers don’t need to subvert any beloved childhood icons in order to tell it. It takes longer to set up the characters and their world, but once we’re there, we can enjoy them without any cognitive disconnect. This is simply “Wonder Park,” and “Wonder Park” is an enjoyable kids flick with decent intentions and some delightful imagery.

Indeed, the park itself is a genuine treat. The various rides and lands, many of which would be physically impossible to re-create on even the most unlimited budget, are sure to fire up the imagination of young audiences. The filmmakers seem to have a genuine respect for the artists who spend their whole lives developing complex, richly themed attractions that excite the mind, and they certainly had fun coming up with wild new examples to surreptitiously enjoy on-screen.

Also Read: Marvel to Develop Animated Series for Disney+ Based on 'What If' Comics

The characters are simplistic creations, mostly boiling down to simple character traits, but for the most part they’re all personified individual aspects of June’s own personality, so it’s hard to complain. In particular, Wonder Park’s lead designer Peanut (Norbert Leo Butz) hits close to home for June. He’s spent his whole career assuming that June’s mother’s voice was his voice of inspiration, and without it, he thinks he can never create again. To convince him to start creating again, June will have to convince herself to start creating again.

The world of “Wonder Park” is thrilling, and the message is unusual for a kids movie, but admirable. It’s the clutter that gets in the way of the movie’s excellence. The complicated first act stops more than it starts, and gets tiresome after a while, and the bizarrely complicated rules of Wonder Park itself — which involve a magic pen, magic whispers and a magic delegation of authority — distract from the film’s simple fantasy of visiting the best amusement park ever, and from the simple message about the importance of staying motivated in the wake of tragedy, depression, grief and loneliness.

Instead of an instant classic, we get a noble effort. We need more of those. This is a bright and earnest attempt to craft an on-screen fantasy for modern kids, with a practical moral that anyone could appreciate.