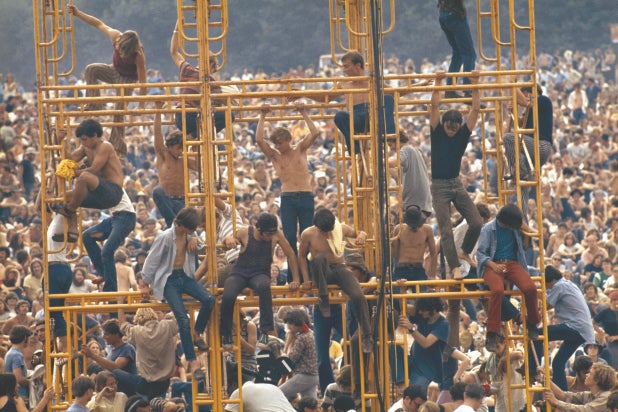 How do you follow one of the most critically acclaimed rock docs of all time? Michael Wadleigh’s seminal 1970 documentary “Woodstock ” was immersive and electric, a definitive, you-are-there experience rather than a here’s-what-happened chronicle. (Among the up-and-comers who worked on it were Wadleigh’s pals Martin Scorsese and Thelma Schoonmaker, who earned her first Oscar nomination.)

Despite its ambitious title, “Woodstock: Three Days that Defined a Generation” is a here’s-what happened chronicle. There’s nothing wrong with that; most documentaries fit a similar category. And this one — which premiered at the Tribeca Film Festival and opens theatrically in May — was made for PBS’ “American Experience” series to mark the event of Woodstock’s 50th anniversary. So even if it never steps out of the shadow of its powerful predecessor, its relatively smaller scale is perhaps inevitable.

But let’s start by taking it on its own terms. Director Barak Goodman (“Oklahoma City”) brings us back to 1967, when buds John Roberts and Joel Rosenman have the wild idea to throw a really groovy party. As we hear in voiceover, they planned on using one upstate New York site after another as their backdrop. But the locals in Woodstock, Wallkill, and Saugerties didn’t love the idea of a bunch of stoned kids tramping through town, and they were stuck until Max Yasgur offered up his farm in nearby Bethel.

Goodman handily establishes the madness of planning in the months leading up to the weekend, and the utter unlikelihood of success. He intersperses striking photos and original footage with voiceover recollections from attendees, who look back on the event as one of the most impactful of their lives. This material will feel very familiar to many, but he does do a nice job taking us through every step, from the early plans to the overwhelming first-day crush to the mud-caked finale. All the non-musical totems are here, from Wavy Gravy’s unlikely security team to Mr. Yasgur’s fatherly speech onstage to “freak-out tents” set up to handle the after-effects of the infamous brown acid.

As for the music? It’s a little disappointing, particularly after the electrifying scenes in the original “Woodstock,” to find such brief clips here. But many of the participants do appear in passing, including Ritchie Havens, Joan Baez, Sly & the Family Stone, The Who, and Joe Cocker. The lengthiest musical footage belongs, aptly, to the most impactful performer: Jimi Hendrix, who closed out the concert with his culture-shifting performance of the national anthem. Half a century later, the power of his performance is as stunning as ever, and connects us instantly to the young audience staring at him in shock and awe.

Speaking of those long-haired, muddy, barely-clothed kids: The youngest of them is now nearing 70, and there’s an undeniable poignancy to seeing beautiful teens and twentysomethings while hearing their much older selves look back with an almost aching wistfulness.

But while there’s a lot of talk about how moved they were by their experience at Woodstock, there are few attempts to dig deeper. What happened after they went home? Were they inspired in any concrete ways? Or haunted by a communal high that would have been impossible to reach again?

Given that we already have a documentary that captures the event so successfully from inside the era, it’s curious that the filmmakers don’t try to mine a perspective beyond nostalgia. The lack of context does feel like a lost opportunity, particularly since many of the seeds of our current culture were planted 50 years ago at Yasgur’s farm. (And also because promoters with far greater resources don’t yet seem able to pull off an anniversary event in 2019.)

The original “Woodstock” remains the standard, by any definition. But this is likely to be an eye-opening primer for anyone who can’t imagine their grandparents looking like proto-Coachella fans — and a welcome reminder for those grandparents themselves.