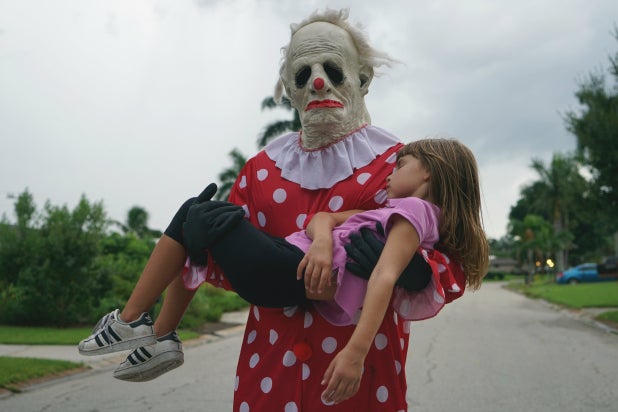 “I’ve been asked before if I feel guilty. You know, that’s a contract between me and Mom and Dad. You got a problem with me, you can take it up with Mom and Dad. ‘Cause I’m just doin’ my job.”

Is there any profession that could require that defense, and still be a good idea? Doubtful. But even if there is, it’s definitely not “Terrifying Middle-Aged Clown Hired by Parents to Scare Naughty Children.”

You may have heard of the gentleman who gives Michael Beach Nichols’ documentary, “Wrinkles the Clown,” its name. And if you aren’t familiar with Wrinkles, you might know of the many imitators he’s inspired, from that time your oldest relatives forwarded you Facebook stories about how clowns were terrorizing suburban neighborhoods across America.

To tell the truth, Wrinkles himself is almost a charming Luddite. As Nichols observes, this 65-year-old veteran advertises his services around — where else — Florida, using nothing more than a sticker with his number and distinctly disconcerting visage. (Think Pennywise’s sad older brother, left out in the rain too long.)

He conducts business the old-fashioned way, collecting over a million voicemails and grumpily bantering with callers who happen to catch him at the right time. And his marketing material couldn’t be more lo-res: fuzzy security camera footage of him crawling out from under a little girl’s bed while she’s sleeping.

Of course, much of the response to Wrinkles is totally 21st century: That footage went viral, he became a meme, teens turned their calls into YouTube videos and media outlets raced to repeat the story. The impassive subject of this frenzy won’t allow us to see his face without a mask, so instead we watch a greasy torso in a stained undershirt, listening to his voicemails and eating fast food inside the white van he calls home.

Given the fact that the previous sentence describes an adult man who hires himself out to enter your home and scare your children, you’d think someone might have looked a little deeper into this story. And eventually, Nichols does. What he finds is promising, but because of the way the movie is structured, the reveal feels like a murky cheat.

No film is ever 100% objective, and no twist is ever (supposed to be) expected. Sometimes we get whiplash, and that’s part of the deal when we sign on as an audience.

But the same is not true for at least some of the parents and children Nichols interviews, who also appear to trust in the sincerity of this documentary and its subject. When we visit a little girl in Enigma, Ga., who talks about Wrinkles with utter conviction, the Confederate flag that flies high on a pole above her house seems to wave at us, welcoming us to judge her.

The same is true for a dad who was generous enough to open up to Nichols about parenting challenges and his four-year-old daughter, who — we’re encouraged to think — has been genuinely traumatized by the threat that the clown may visit her if she’s “bad.” And what is Wrinkles’ random stop at a strip club, if not a cheap excuse for Nichols to include some gratuitous shots of strippers in his movie?

We keep getting glimpses of a compelling subject, but it’s hard to know what Nichols is really going for, since he tosses so many disparate elements together without tying them into a meaningful thread.
The elements are all there: The up-close-and-personal moments with Wrinkles suggest an intriguingly bizarre character portrait that could, at any time, veer in unexpected directions. There’s some pop cultural analysis, as requisite talking heads analyze the enduring appeal of horror legends like the Slender Man. A history of Wrinkles’ predecessors, going all the way back to Punch & Judy, promises to take us into humanity’s collective neuroses.

But then Nichols swerves again. Does he want to expose the complicity of the media in myth-making? The sheep-like gullibility of the general public?

Actually, the image of Wrinkles carrying a sleeping child out of her home points to a more likely truth: He wants to mess with us, and then get credit for doing more. But really he’s just hopping on the Wrinkles bandwagon himself, because that’s exactly what the creepy clown’s been doing all along.