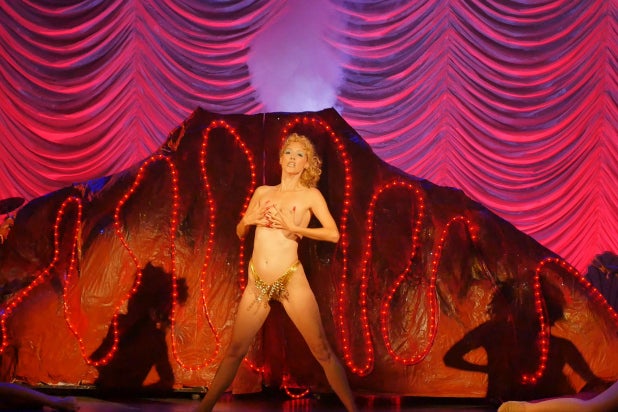 Jeffrey McHale’s feature debut, the “Showgirls” appreciation documentary “You Don’t Nomi,” works awfully hard to justify both its subject and its mission. But if you instantly appreciated the cleverness of its title, you’ll enjoy commiserating with fellow travelers.

It’s hard to overstate what a big deal “Showgirls” was when it hit movie theaters in 1995, though McHale gives us some sense of the pop-culture buildup that preceded it. It was directed by Paul Verhoeven and written by Joe Eszterhas, the team behind 1992’s similarly controversial success “Basic Instinct.” It was the first NC-17 movie in wide release. And it would also be the first big-screen splash from a “Saved by the Bell” cast member, Elizabeth Berkley. (Yes, this mattered in 1995).

And then it opened.

After being primed for the biggest hit of the year — a rawer, more honest update on Eszterhas’ ’80s stripper smash “Flashdance” — audiences were faced with a deadly-serious take on “All About Eve,” with the former Jessie Spano from “Saved by the Bell” replacing Anne Baxter. (Gina Gershon, perhaps the only participant who was in on the joke, stood in for Bette Davis.) As the rarely-clothed, always-striving Vegas showgirl Nomi, Berkley turned in a performance so exaggerated as to suggest an avant-garde silent film. “Showgirls” did become an instant classic. It was just for all the wrong reasons.

McHale’s goal is twofold: to explore those reasons, and to wonder if we were mistaken all along. “Showgirls” is, we hear from various talking heads, a misunderstood effort with serious artistic value beyond its camp appeal.

Watch Video: 'DWTS': Elizabeth Berkley 'So Excited' to Be Back on Pills in 'Saved by the Bell' Tribute

All power to him and his sources — including Adam Nayman, author of “It Doesn’t Suck: Showgirls” and poet Jeffery Conway, who wrote “Showgirls: The Movie in Sestinas” — for seeing more than most of us do. But skeptics are unlikely to be converted by quotes that tend to be either generic or overstated. “We are still talking about ‘Showgirls’ because we are not done with it,” we learn in one voiceover. Which, sure. But you could viably say that about everything else we talk about, too.

Similarly under-substantiated accolades wind up taking the film in an oddly earnest direction, rather than the witty path suggested by that promising title. Though Verhoeven has undeniable visual skill, none of the defiant assertions heard here convincingly make the case that this “gorgeous,” “special,” “anti-realist” movie is an intentional work of significant art.

McHale finds more compelling evidence for the film’s enduring popularity via emotionally honest interviews with artists like drag performer Peaches Christ. Equally memorable is April Kidwell (pictured), who wrote a one-woman show called “I, Nomi” and has appeared not only as Nomi in “Showgirls! The Musical!” but as Jessie Spano in “Bayside! The Musical!”

Like many cult films, this one connects with disenfranchised viewers through its rejection of cultural norms. The power of “Showgirls,” such as it is, comes not from its unappreciated artistry but its lack thereof. It’s not merely so-bad-it’s-good; it’s convinced it’s good, and doesn’t give a damn if you agree. That’s a pretty appealing draw for anyone who can relate to EszterHoeven’s provocative self-confidence, Nomi’s defensive anger, Berkley’s unguarded intensity, or the entire movie’s messy, conflicted chaos.

Does “Showgirls” deserves a full-length documentary of its own? That’s a question this project never quite resolves. But McHale does have another very strong and unexpected asset: copious clips from the original source, which the uninitiated will find as deliriously insane as the movie’s reputation suggests.

We can project all sorts of things onto any work, but seeing the evidence for ourselves turns out to be more convincing than revisionist debate. At heart, “Showgirls” is that most human of draws: an out-of-control spectacle. And perhaps that’s enough. Sometimes, actually, something really is just so bad it’s good.