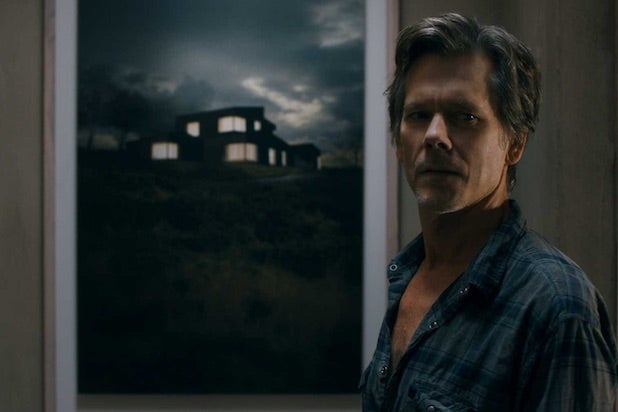 The first words we hear Kevin Bacon say in “You Should Have Left” are “goddamn nightmares,” a phrase his character spits out after waking from some feverish visions that include long dark hallways, spooky music and a sinister, bedraggled guy threatening a little girl.

There are lots more of those nightmares to come over the next 90 minutes in this psychological thriller – oh, let’s scratch that and call it a horror movie – from writer-director David Koepp, best known as the screenwriter of “Jurassic Park,” “Mission: Impossible,” “War of the Worlds” and “Spider-Man.” Working from a novella by German writer Daniel Kehlmann, Koepp has joined forces with Blumhouse Productions to make a film that’s much closer in scale to his previous directing jobs like “Stir of Echoes” and “The Trigger Effect” than to his blockbuster screenplays, and not nearly as gripping as Blumhouse’s last spin on horror, “The Invisible Man.”

Sure, it’s creepy as hell and very stylish to boot, but “You Should Have Left” essentially plays like a scaled-down Blumhouse riff on “The Shining,” only with slightly shorter hallways and considerably less ambition.

Instead of the Overlook Hotel, we have an imposing modern house in the Welsh countryside, where Theo Conroy (Bacon), a rich banker who retired under a cloud of suspicion after being acquitted of murdering his first wife, has gone to spend some relaxing time with his actress wife, Susanna (Amanda Seyfried), and their young daughter, Ella (Avery Essex).

There are clearly tensions in the relationship, mostly around the exact nature of Susanna’s relationship with a co-worker. But then, there are tensions galore in Theo’s life, because that’s what happens when lots of people still don’t believe that he didn’t dose his first wife with sleeping pills and drop her in the bathtub.

The formidable Wales Airbnb promises a bit of peace, but the music tells us otherwise and so does the set design. Sparsely furnished with no personal touches, the house looks impressive in the daylight – but once the sun goes down, those long narrow hallways lined in brick start to look downright creepy, particularly since there always seems to be a room way down at the end with a light on.

Also Read: 'The Hunt' Producers Jason Blum, Damon Lindelof Lament 'Cancel Culture' That Spiked Release of 'a Movie No One Had Seen'

It’s fun to watch old haunted-house tropes play out in a sleek modern setting, and the film quickly establishes that either the house is evil or the house is bringing out the evil in Theo. (“Shining” fans will know: Theo’s never been here before, but maybe he’s always been the caretaker.)

Theo, who was a screenwriter in the original novella, is just a screwed-up rich guy who writes in a journal for his peace of mind in this version – and when the strange things that are happening include him finding a scrawled “You Should Leave – Go Now” in his journal, you might figure he’s had warning enough. But of course warning enough is never enough in movies like this, so the family hangs around and all hell breaks loose – perhaps literally, perhaps not.

That might be disturbing, and maybe even a little frightening, but it’s not special in the way the best work of Koepp and Blumhouse as been. But hey, it’ll make you squirm if that’s what you’re looking for.