Words like charming and whimsical and even downright funny aren’t ones you usually associate with a play about illness and death. In the case of Noah Diaz’s “You Will Get Sick,” which had its world premiere Sunday at the Roundabout’s Laura Pels Theatre, you might also add the word more than a little bit fey. And it is also very conceivable that Diaz’s 90-minute comedy would not work at all without the astonishing performance of Linda Lavin, who plays the world’s most mercenary caregiver. But Lavin is center stage for most of the play, and so it works very well indeed.

Her character (credited as #2) meets a young, dying man (Daniel K. Isaac, credited as #1) in response to a flier he has posted around Manhattan. He offers money to talk to someone about his being sick. His is a difficult situation for all the obvious reasons, but adding to his silence and reticence on the subject is that he has been here before. He recently cared for his older brother, who has since passed away.

Lavin’s character answers the flier, and in her chat with the young man, she never loses sight of exactly how much money she is going to make from this phone call. She’s listening to his problems for one reason and one reason only: There’s a hundred bucks in it for her, or is it only 40 or 20? A lot of quibbling goes on. The old woman’s avaricious nature fuels the comedy, and Lavin’s understated and even casual demands for money to indulge in another conversation or to wipe the young man’s forehead of his fever sweat – sometimes he gets it at a bargain rate of $10 and sometimes she even throws in a freebie – never cease to both startle and entertain. 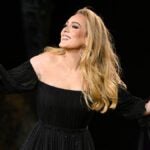 Also Read:
Adele Reveals the Broadway Role She Thinks She Could ‘Nail’ to Win the EGOT (Video)

Lavin’s character is hardly a professional caregiver – she claims to be an actor — but the payments the young man makes to her for the smallest acts of kindness bring home the sad point that at a certain point in most people’s lives they have to pay someone for the care they will eventually require.

A professional caregiver (Nate Miller, who plays multiple roles) makes a brief appearance late in the play, and the young man keeps confusing this nurse with his ex-boyfriend, also played by Miller (along with a couple of waiters and an acting student). Marinda Anderson plays, among other roles, the young man’s sister, co-worker and an acting teacher. Under Sam Pinkleton’s direction, this theater of the absurd is enhanced by Miller and Anderson going very broad in all of their respective performances. A far more calming force is an offstage voice (Dario Ladani Sanchez) who isn’t so much a narrator as someone who provides stage directions.

What leavens the often brutal approach to the young man’s illness is that Lavin’s character, while never ceasing to ask for and receive money, does develop empathy for him. Diaz handles this character development unsentimentally in an acting class that is a hysterical send-up of sense-memory techniques, and it is here that the old woman “uses” what she has felt and learned from her time with this dying man. The beauty of “You Will Get Sick” is that the experience never gets in the way of her avarice. 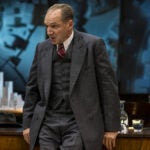 Only in these moments of acting empathy do we take Lavin’s character seriously as an actor. She never refers to any of her credits, probably because they don’t exist, and there’s more than a little bit of delusion in her career pursuit since the role she’s currently auditioning for is Dorothy in “The Wizard of Oz.”

This is where the fey part comes in. The young man’s illness also begins to take on shades of “Oz” as he slowly disintegrates and loses any control of his body. Pinkleton handles these fantasy elements with great skill and a lot of help from the sleek set design (by dots), lighting (by Cha See) and what is credited as “magic & illusion” (by Skylar Fox). Most intriguing, Isaac never seems more than mildly surprised at what is happening to his character’s body. He wins our sympathy by never asking, much less begging for it.

An actor in her 80s attempting to play Dorothy and eventually showing up in that character’s iconic costume right down to the ruby-red slippers (costumes by Michael Krass and Alicia Austin) provides the expected laughs, not to mention the easy reference to “there’s no place like home.” What we’re meant to derive from all the characters’ Hitchcockian fear of predatory birds is something else. Maybe yet another word to describe this most unique play is obscure. 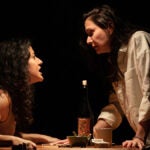