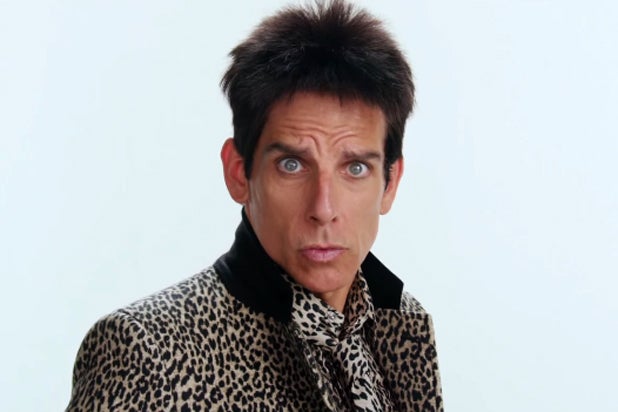 “Zoolander 2” was a highly-anticipated sequel, but it came about 15 years too late, according to critics.

The comedy, in which Ben Stiller and Owen Wilson reprise their roles from the original 2001 film, is getting torn apart by reviews, which cumulatively have given the film 26 percent “Rotten” score on Rotten Tomatoes.

“There are no build-ups or pay-offs here, just a lot of random moments of people saying stupid stuff, and fashion people being gently lampooned,” TheWrap’s film critic, Alonso Duralde said in his review. “For pure comedy, you’re better off with one of those online mega-mix videos of models falling down on the runway.”

Other critics call the sequel an “affront to everyone who liked the original,” and an “unending string of creaky pop-culture jokes.”

See nine of the worst reviews below.

Nico Lang, Salon:
“If you enjoyed ‘Zoolander,’ listen to your friend Billy Zane: Toss this one back in the bargain bin where it belongs. This hideous knockoff isn’t just a crime against fashion, it’s an affront to everyone who liked the original.”

Brian Truitt, USA Today:
“Stiller’s Derek Zoolander (he of the powerful ‘Blue Steel’ and ‘Magnum’ looks) and Wilson’s Hansel (whose signature expression seems to be ‘Pouty Resting Face’) return for a follow-up comprised of tired in-jokes, a strangely mean-spirited family subplot and a parade of forgettable cameos by A-list celebrities. Moviegoers may wish that Will Ferrell‘s megalomaniacal supervillain Mugatu had won in the first ‘Zoolander’ and saved us from another film with these boneheads.”

Will Leitch, The New Republic:
“It’s surprisingly conventional, but not in a reassuring or back-to-basics way; its set ups and jokes are creaky and labored, its characters stock and strait-jacketed. For all the comedic talent on display, there’s never a tightrope-walking sense of danger. This is safe, easy, and down-the-middle. ‘You like these characters? Well, here they are again.’ There’s little justification for a sequel after 14 years.”

Richard Lawson, Vanity Fair:
“Yes, ‘Zoolander 2’ is that bad, an unending string of creaky pop-culture jokes — a hotel has ‘farm-to-table WiFi,’ because ‘farm-to-table’ and ‘WiFi’ are terms people are using these days –peppered with squicky, uncomfortable outré bits that land badly.”

Tony Hicks, San Jose Mercury News:
“Unfortunately, ‘Zoolander 2’ is exactly what its trailers make it look like: a once-wonderfully funny idea beaten to death with the same jokes that seemed much better 15 years ago. Despite the best attempts by writers Ben Stiller and Justin Theroux to actually advance the plot, ‘Zoolander 2’ falls somewhere between the second and third Austin Powers movies on the laugh scale. Too bad, because the predecessor, 2001’s ‘Zoolander,’ was a hilariously fresh take on the silly world of high fashion. But as the sequel makes clear, they should have left it there.”

Barbara VanDenburgh, Arizona Republic:
“Sticking Derek and Hansel in a world now dominated by smartphones, social media and selfie sticks gave the writers plenty to lampoon, but it’s squandered instead on the odd hashtag joke and Netflix plug (where we’re sure to see ‘Zoolander 2’ streaming in short order).It’s a stumble down the catwalk not even Blue Steel can save.”

Christian Nashawaty, Entertainment Weekly:
“The thing is, if Stiller spent half as much time sharpening the film’s jokes as he did rifling through his Rolodex for celebrity cameos (Willie Nelson, Kiefer Sutherland, Susan Boyle?!), he might’ve coughed up a few laughs. As it is, though, ‘Zoolander 2’ is embarrassing, lazy, and aggressively unfunny. The only good news is that at the pace the franchise is moving, we won’t get ‘Zoolander 3’ until 2030.”

Stephen Holden, New York Times:
“As it bumps along on a stream of mostly unfunny jokes and awkward celebrity sightings, the movie, directed by Mr. Stiller from a scatterbrained screenplay he wrote with Justin Theroux, Nicholas Stoller and John Hamburg, rapidly loses its charm and turns into a silly, meaningless pseudo-spy-caper that suggests a discarded remnant of the ‘Austin Powers’ franchise.”

Scott Mendelson, Forbes:
“The majority of the film, the first two acts really, just lie there in wait for something interesting or funny to happen beyond another celebrity cameo. Yes, some of the cameos elicit smiles, but that’s the only ammunition the film seems to have beyond its third-act villain. ‘Zoolander’ was a real comedy with amusing characters, witty situations and a plot that served said characters while offering some bubbling-under-the-surface commentary that sadly turned out to be sadly topical. ‘Zoolander 2’ exists purely to cash in on the cult adoration of the original picture, as well as to cash in on the generational nostalgia that fuels so much of our social media these days. Sadly, ‘Zoolander 2‘ really is the very definition of a ‘number two.'”