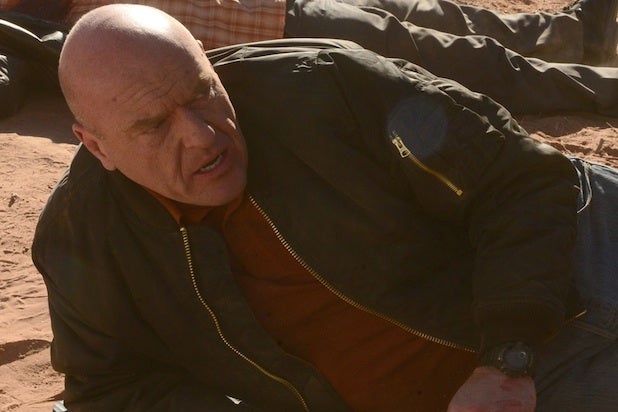 “Breaking Bad” wrapped its run last year, bringing to an end one of the most striking dramas in television history.

With Emmy nominations approaching, TheWrap spoke to Dean Norris, who played DEA agent Hank Schrader on the series (and who now stars on CBS’s Stephen King adaptation “Under the Dome”) about his most difficult “Breaking Bad” moments, what the series was really about, and who he’d like to play if he had the chance.

What was the toughest thing you had to do during the final season of “Breaking Bad”?
Having to say goodbye to the cast, crew and show that I really really love. With acting, the last scene in the first episode this season in the garage with Bryan Cranston. Trying to find the right level of seemingly 100 different emotions and filtering each one in correctly. Betrayal, hurt, anger, fear … Trying to be present and truthful to the prose Peter Gould wrote as description for that moment.

What was the most fun thing you had to do this season?
Telling the bad guy who killed me to go fuck himself before he died.

Let’s assume that somebody has never seen your show. What would you say to persuade them to watch it?
I would say “Breaking Bad” is not a show about meth. It is a show about dying, failure in life, fathers and sons. Oh, and it’s really scary, really visceral and really, really funny.

You’re an Emmy voter. You can’t vote for yourself or your show. Who’s at the top of your ballot?
“Game of Thrones” and “House of Cards” in drama. “Getting On” in comedy. Robin Wright as lead actress is transcendent. Sixty, let alone 6, is not enough choices for supporting actor and actress.

If you could play any other role on any other show, what would it be?
Tywin Lannister.

What was the last TV show you binge-watched? How many episodes did you see in a sitting?
“House of Cards.”  Four or five per sitting.

If you get nominated, what will you pick as your Emmy episode?
“Blood Money.”

Is this the Golden Age of Television?
Golden, silver and platinum.  Every year I need more space on my DVR.