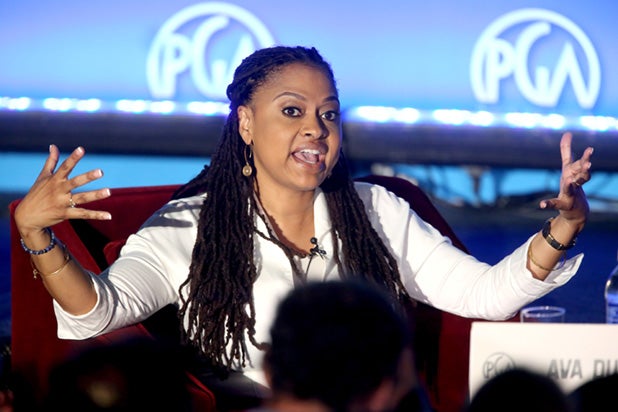 Ava DuVernay called out MSNBC for canceling a satellite interview on her #JusticeForFlint event via Twitter on Sunday.

In the tweet, the “Selma” director suggested that the cable network may have cut the interview because she mentioned the recently ousted host Melissa Harris-Perry on camera.

“Hi @MSNBC. Did you bump my satellite interview about #JusticeForFlint event because I gave love to @MHarrisPerry or nah?” the director wrote in a tweet accompanied by the hashtag #inquiringminds.

DuVernay was being interviewed about her Sunday benefit for the residents of Flint, Michigan, who are currently in the midst of a water contamination crisis.

The #JusticeForFlint event was presented by Blackout for Human Rights, which DuVernay co-founded alongside “Creed” director Ryan Coogler. It also featured appearances by Janelle Monae, “Empire’s” Jussie Smollett and “Grey’s Anatomy’s” Jesse Williams, among others.

Late last week, The New York Times obtained an email Harris-Perry sent to staff explaining her refusal to appear on her weekend show, leading the network to cut ties with the host entirely over the weekend.

“Our show was taken — without comment or discussion or notice — in the midst of an election season,” she wrote in the email, citing that the show was pre-empted several weekends in a row for the network’s breaking news coverage. “We were effectively and utterly silenced.”

News that she had officially departed the network came on Sunday, with an MSNBC spokesperson calling her reaction “really surprising, confusing and disappointing.”

Hi @MSNBC. Did you bump my satellite interview about #JusticeForFlint event because I gave love to @MHarrisPerry or nah? #inquiringminds