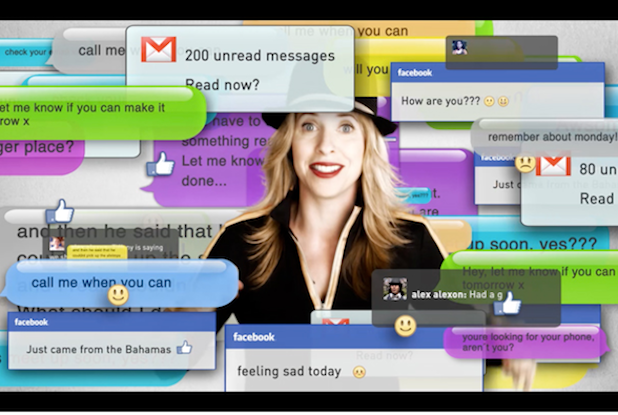 Tiffany Shlain is a filmmaker first and a technologist second. The co-founder of the Webby Awards went to film school, learned to edit movies by splicing actual film, and has made more than a dozen films in her life.

Yet Shalin is ready to move past the movie theater after shooting eight episodes of a new series for AOL, which she considers eight short films.

“Everyone can watch them all at once on any screen any time,” Shlain told TheWrap. “It’s so liberating; I can’t describe it to you. I’m never going to release the same way again.”

Shlain’s show, titled “The Future Starts Here,” blends social commentary with historical analogies. She raves about disconnecting from electronics and extols the need for technology etiquette.

“That was my silly one,” Shlain said.

TheWrap spoke with Shlain about her new series, the future of film and why we all need to take a day off from our phones.

What was the impetus for this show?
My team and I were busily and happily working on this other film, “The Science Character,” when I got a call out of the blue from someone at AOL. I was skeptical, but she kept saying ‘do whatever you want. You get complete creative freedom.’ I’m interested in so many subjects we made films about, so the idea of making 8 short films all interlinked was very interesting. We were just grooving on this new evolved style of my style.

What is your style?
My work has a stream of consciousness element. I’m pulling from treasures of culture and society and history. This series is definitely an evolved form of that. It has a lot of humor, a lot of big ideas, a lot of thoughts I want to share.

In your film “Connected” you talk about this idea of a “Technology Shabbat.” That is also the subject of your first short. Can you explain that for the gentiles in the audience?
Since my dad got sick I started unplugging one day a week and it has been a very profound thing for me. I feel everyone should do it. Jews aren’t supposed to prosthelytize, but everyone should try it. It’s not good for the brain.

Your brain needs to go into different modes of thoughts. There are so many studies about how relaxation balances out being online all the time.

So why were you skeptical about working on this series?
I’d never made films for a bid media company before. I only made my own films. I hear so many things in LA about people wanting to interfere with notes and change your vision. I’d never had to deal with that. I’m grateful I’ve never had to experience that. It was a dream working with AOL.

Did you know each one would be a separate short film? Did you have ideas in mind?
I knew I wouldn’t get to do more than 8 because I spend a lot of time on my shorts. They are very carefully crafted and have a lot of animation. These are all subjects I speak about in talks.

What’s the most fundamental or profound way in which technology has changed your life?
It is the natural evolution of humans that we are evolving to be all connected and we’ve now created these tools to do that. There’s good in that and bad in that.

How is technology impacting movies? Is it having the impact you thought it would?
I had ‘Connected’ in theaters, playing at the Arclight [in Los Angeles] and Angelika [in New York], and spent a lot of time trying to get people to a theater.

Everyone can watch these shorts all at once on any screen any time. That’s so liberating. I can’t describe it to you. I’m never going to release the same way again. This is the future. It is the way people want to experience . I don’t think of this as a web series. It’s a screen series.

In less than one year you watch it on the web and you can watch on TV. The model AOL has built, the distribution model, is massive.

But you’re still a filmmaker?
I learned on 16-milimeter. I went to NYU film school for a summer program and learned on film and tape and splicer. In my mind, in my DNA, I’m a filmmaker.

But everything is much more fluid now. I made a film last year called “Brain Power.” Ted, the conference business, contacted me to do a book based on the film. I took the script and made it an iPad book with music. Then it became a printed book. It’s all so nebulous as to what you’re creating for.  You just need a strong idea.

So what’s next?
We have our new film “The Science Character.” I can’t announce where it’s premièring, but really soon. The next one is “21st Century Brain.” I had a blast on “The Future Starts Here.” Maybe another season.

This is a golden period.