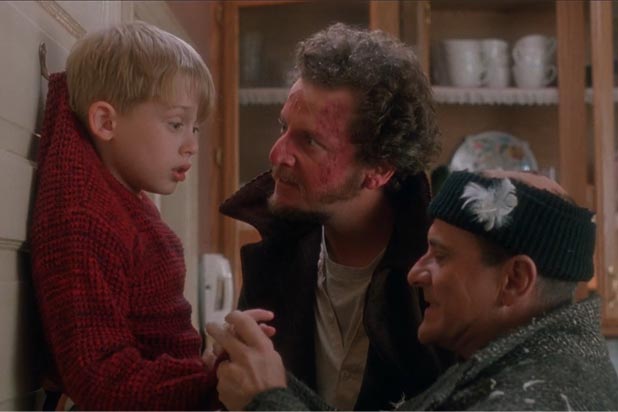 In honor of the 25th anniversary of “Home Alone” this week, TheWrap tracked down Daniel Stern to reminisce about the film, which has become a TV staple around the holidays each year.

Stern has had a charmed career ever since his first film, “Breaking Away,” won an Oscar for best original screenplay. In the ’80s, he worked with Woody Allen on “Stardust Memories” and “Hannah and Her Sisters,” Barry Levinson on “Diner” and Robert Redford on “The Milagro Beanfield War.”

Not only did Stern go on to star in two family-friendly franchises with “Home Alone” and “City Slickers,” but he also narrated one of the most beloved TV series of all time, “The Wonder Years.”

Stern hasn’t been as active in front of the camera in recent years, as he’s been focused on raising a family and his volunteer work, as well as honing his skills as a sculptor, though he does have a recurring role on WGN America’s “Manhattan” and has directed several episodes of the historical drama.

Here, Stern talks about working with Joe Pesci on “Home Alone,” why Macaulay Culkin wasn’t a “genius actor” as a kid and why life is about more than Hollywood.

How’d you first get involved in “Home Alone”?
Before “Home Alone,” I’d been in a fair amount of movies but I never really cared how successful they were going to be. I just cared if it was a good part. “Home Alone” was different. The script was perfect, and I’d never read a script while laughing out loud, so that was an unusual feeling. It was certainly a different kind of beast.

Did you have any idea at the time that it was going to be as big as it was?
I don’t know if I knew it was going to be a hit, but it had heart and comedy and a message, so I auditioned for it and really wanted to get it. I auditioned for Chris Columbus and did a good job, but I left there going, “Shit, I could’ve done a little better.” So I pulled over and called my agent, and I’d never done this before, but I asked if I could go back and do it again. So I went and auditioned again, and it wasn’t that different. I love being funny and I’d never had an opportunity to be funny like that in the movies and do that kind of physical comedy, so I just wanted to fight for the part. Later, Chris said I’d already gotten the part. Talk about working with Joe Pesci, your partner in crime and fellow Wet Bandit. He’d worked with Martin Scorsese and you’d worked with Woody Allen, so was there a mutual respect there?
Joe and I knew each other already because we’d both been in “I’m Dancing as Fast as I Can,” which we were both cut out of, but we became friends during that movie. He was so fucking funny and crazy and bitter and pugnacious and all those Joe things, so we’d already had a lot of laughs together. So it was an easy fit and it was a way to be funny together on screen.

Again, you read that script and it just made you laugh. Joe likes to be funny. He’s a funny man, and he’s other things too, but he can be intimidating. I thought it was kind of brilliant for Joe. As I remember it, he kind of invented a language of cartoon-character cussing, which kept him grounded in a way. He wanted Harry to have a cartoon kind of sound to him.

Was Pesci ever like, “What the hell am I doing in this kids movie?”
I don’t think so, because we went back and did a second one and had a hell of a good time on that one too!

What stunts did you do on your own in “Home Alone,” and which one hurt the most?
I did a fair amount of stunts on the first film, but “Home Alone 2” really beat the shit out of me. I haven’t even seen it since it came out. In the first one, we were regular bad guys. There were lots of paint cans and falling down the stairs and walking across glass and a tarantula crawling on my face.

But the most beat-up I ever got was the second one, especially in the basement climbing a tower of old TV sets. It wasn’t a big laugh or a big stunt, but all those angles beat the shit out of me. My legs were black-and-blue from the weird angles I’d get snagged on. You think it’d be on the big stunts, but it’s the little ones you have to watch out for. The worst was when I clipped my big nose when I stuck my head through a doggie door, which wasn’t big enough for my schnoz. My stunt double, Leon Delaney, and Troy Brown [Pesci’s stunt double] took a beating, though. Those guys were the unsung heroes of “Home Alone.”

This is a classic debate I’ve had with my friends over the years. Who do you think got it worse over the course of both movies — Harry or Marv?
I got it worse. Joe was the brains of the operation and the smart guy, so he was the Jackie Gleason and I was the Art Carney. I do remember how after the tarantula was on my face, Joe started beating me with a crowbar. I got the worst of it, since Joe was beating me up, not just the kid.

I think you got it worse, especially with the nail in the foot. That looked like it would hurt.
Yeah, that one wasn’t quite as funny, and the iron in the face was pretty violent too. I remember they had Christmas bulbs I had to walk across and they were made of candy glass. As an actor, you get to really go for it, and that was a realistic one I could do myself. How do you think Harry and Marv would’ve fared in prison?
They would’ve fared quite well. We were badass motherf–kers, except for that kid. If we were around adults, we would’ve held our own. He just found a chink in the armor.

I know Pesci was the perceived leader and talked a tough game, but you’re 6’4” so it seems like he’d need you more.
It’s Joe Pesci. He doesn’t need anybody.

Have you ever worked with a child actor as good as Macaulay Culkin?
I’ve worked with a lot of talented kids. I worked with Thomas Ian Nicholas and the kids on “Rookie of the Year.” I directed episodes of “The Wonder Years.” Kids are a big part of my life. Mac was a beautiful kid, but he and Chris [Columbus] would tell you the same thing. Chris had a strong hand and handled Macaulay beautifully. You have to make kids feel safe and encourage them, and Chris got a delicious performance out of him, but I couldn’t say he was a genius actor at the time. He has grown into it as an adult, but as a kid, he was just a great presence and very open. You have to shape child actors, because if you make them do the performance all by themselves, it makes them feel unsafe.

Speaking of Kevins, you narrated “The Wonder Years” as the grown-up voice of Kevin Arnold (Fred Savage). Do you have a favorite episode of the show?
It’s a bit of a blur. The ones that stand out are the first one and the last one. That was like the “Home Alone” script too, where you read it and go, “Holy crap, this is so different and deep. I’m not even in it but I have a terrific part!” The poetry of the first episode was gorgeous and set up the thesis of the show. The last one was an incredibly emotional goodbye. It ends with the narrator’s son bursting into his room and asking his Dad to go play catch, and the narrator says, “Yeah, I’ll be right there.” My son Henry actually played the kid coming in the door. It was a gift to cut my teeth on such an awesome show that taught me how to direct and edit.

You’ve directed “Rookie of the Year” and episodes of “Manhattan.” Any plans to return behind the camera, or are you focused on other areas of life at this point of your career?
That’s really the best job for me. I’ve acted on “Manhattan” and directed the episode last night. I like the young people/family movie thing. I’ve got a couple things in development, but it’s hard to get these movies made. My life is complicated and interesting. I’ve got another career as a sculptor, working with bronze and making art for public displays and galleries. It’s a whole other expression of my creativity that takes up a lot of my time. I also bought a cattle ranch and I’ve been working the ranch for a couple weeks. So my life’s crazy, and movie development is a slow process. Show business is fun and I like it, but there’s other parts of my life too.

My kids are kind of crazy. My son Henry is running for state Senate. He worked for Sen. Fran Pavley and I think he’s going to win a seat in the Valley, which covers Thousand Oaks to Magic Mountain. My daughter Sophie is a songwriter for Dr. Luke and the little one is a paramedic in medical school, so life is big for me. I’ve discovered life is big — it’s not just about my next part. “Home Alone” gave me the freedom to live this way.

When I got the sequel, I decided I was going to save the money and buy my artistic freedom. It all worked out beautifully, especially the sculptor part. Finally, for all the “Diner” fans out there, I have to ask — Sinatra or Mathis?
It’s gotta be Sinatra. He’s the best to make out to. I mean, I love Johnny Mathis, but in terms of the make-out qualifications, I’m going with Sinatra.

Good call. I love that movie. You’ve had such an interesting career.
You know, “Diner” had a little magic too. It’s funny, “Breaking Away” was my first movie and it won the Academy Award. So right off the bat, I was like, ‘Oh, so this is what acting in movies is like. I like it!’ I try to honor my career by doing things I like, such as “Diner,” “Breaking Away,” “Home Alone” and “The Wonder Years.” I’m the luckiest guy I know and I’m still married to the same lady for 35 years, so I win.