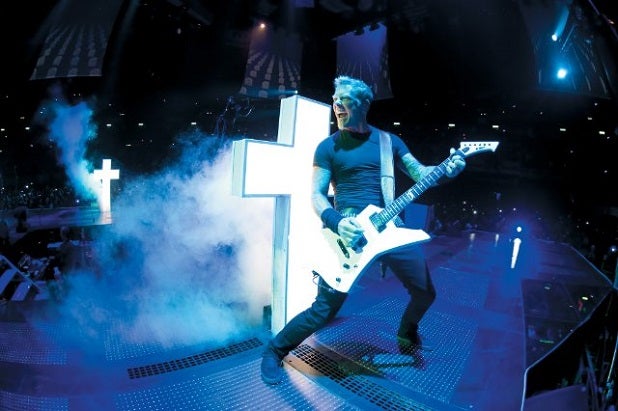 “Metallica Though the Never” opened this weekend to $1.7 million – the best opening for a concert film ever at Imax theaters – but the heavy metal rockers couldn’t match the $3.1 million debut that a re-release of “The Wizard of Oz” posted last weekend.

Neither Metallica distributor Picturehouse, Warner Bros. nor Imax executives, who devised a morning-evening split-release schedule for the two films, were complaining 0n Sunday, however.

The 75-year-old “Wizard of Oz” has now taken in $5 million in 10 days, and this weekend was screening on 305 Imax screens for morning and noon shows, while “Metallica Through the Never” took over for the rest of the day’s 3D showings.

The R-rated “Through the Never,” a narrative-concert hybrid film in which Dane DeHaan (“The Amazing Spider-man”) stars, is the first release from Picturehouse since Bob Berney earlier this year bought the name and trademark of the label he helped found back in 2005. Warner Bros. shut down the niche label in 2008, but Berney and his wife Jeanne have resurrected Picturehouse as a true independent outfit.

Also read: ‘Metallica Through the Never’ Rocks the Rebirth of Indie Picturehouse

Picturehouse will expand “Through the Never” into about 650 screens nationwide next weekend.