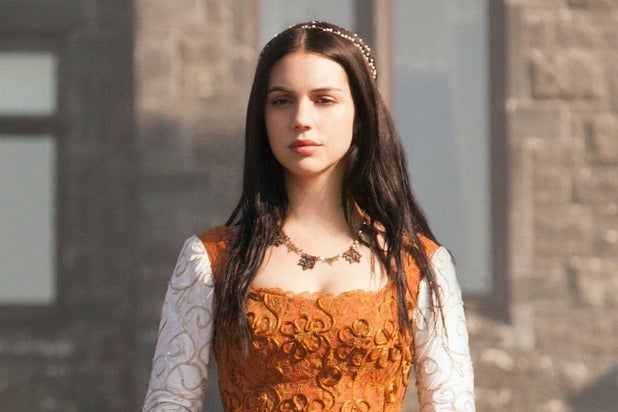 You may have heard about all the sexy, sexy sex in the CW’s new “Reign,” premiering Thursday night. But since you’re reading this on a device with access to all the sex you could ever want to see, I’m going to assume you aren’t tuning into network TV to get your jollies.

That’s smart, because there isn’t even that much sex on “Reign.” And there are many better reasons to watch the historic drama, kind of a lighter, girlier “Game of Thrones.”

Those reasons include sumptuous production values, a fast pace and a modern spin on the story of Mary, Queen of Scots. The best reason to watch is Mary herself, played by star-in-the-making Adelaide Kane. She leads a cast that manages not to look hilariously out of place while appealing to the CW’s 18-34 demographic.

“Reign” is nowhere near as good as “Thrones” — how many shows are? — but it’s enough fun to tide you over until the Lannisters & Co. return to HBO.

The CW series does a fairly effortless-looking job of combining a 16th-century setting with a fluid, modern dynamic. The show takes some historic liberties, because, well, it’s a show. But in a few efficient if formulaic scenes, Mary quickly becomes at least as sympathetic as young Carrie Bradshaw in “The Carrie Diaries,” despite the centuries between them.

Mary has plenty of Carrie-level problems – her love interest seems like a player, and she’s kind of into his bastard brother. (He’s a bastard in the sense that he’s the king’s secret son, not that he’s a bad dude.) For added drama, the fate of Scotland depends on whether she can make it work with Prince Francis (Toby Regbo), the conveniently named future king of France. And there are class issues, because the French are more uptight than the Scots even though they all sound British. Just go with it.

Mary also faces lots of immediate threats: She is almost murdered in the show’s opening minutes. Then she barely avoids the 16th-century equivalent of being roofied and raped. The show gets to the drama quickly, and doesn’t sugarcoat things. The overriding problem is that Nostradamus – yep, here’s here, too – has predicted she’ll be the death of Francis. His mother, the queen, doesn’t like that.

Some of these problems might seem easily resolvable – why can’t Mary just date the hunky bastard and Scotland and France agree to be friends even without an alliance through marriage? But you know those oh-so-formal French.

“Reign” is the rare show, for me, where the sweeping landscapes and beautiful buildings serve as a lure rather than a distraction. “Game of Thrones” is another. The “Reign” pilot, like much of “Thrones,” was shot in Ireland. Presumably the production values will go down from here, but wow, are they lush in the pilot.

No one in the cast is bad to look at, either: Kane in particular has a gift for looking beautiful and overwhelmed by beauty at the same time. It makes it easy to understand why Francis can’t quit Mary, and France and Scotland just might work it out.