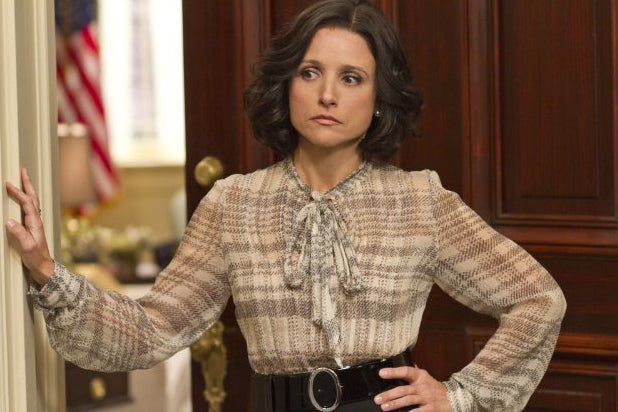 When your show is about the vice president, there’s one obvious way to raise the stakes.

“Veep” clued us in last year that the current third season, which debuts Sunday, would center on Selina Meyers (Julia Louis-Dreyfus) running for president. Would you believe it brings out her worst qualities?

Also read: ‘Veep’ Creator Armando Iannucci on Pushing TV Comedy ‘To the Edge of a Cliff’

Meyers’ crew of desperate underlings are a de facto family, because they don’t have time for real ones. Actually, Mike (Matt Walsh) is trying to make one, in the most awkward way possible. But that only adds to the hideous dynamic between him and his colleagues, as they backstab each other in the service of a politician who would drop them all without hesitation.

And maybe will. The show finds lots of other ways to heighten the misery (read: comedy) this season, including the possibility that Meyers will dump her staff. At least they quickly get a break from White House liaison Jonah (Timothy Simons) who manages to lose his job. But he quickly moves on to a career in new journalism (read: fake journalism) that allows him to be more annoying than ever before.

“Veep” is set in what terrorists and comedians might call a target-rich environment, but it still finds lots of ways to surprise us. Dan (Reid Scott) and Amy (Anna Clumsky) are fighting a cold war over who gets to run their terrible boss’ campaign. Gary (Tony Hale) runs into a small problem that threatens his reason for being. Even Sue (Sufe Bradshow) is starting to lose her cool, thanks to the attentions of Kent (Gary Cole).

HBO has established itself a pretty fantastic hour of comedy at 10 p.m. on Sunday nights, between “Veep” and Mike Judge‘s new “Silicon Valley.” They share an actor — Zach Woods — as well as a dark, almost hopeless sensibility. This season “Veep” as two of Judge’s actors from “Office Space,” not just Cole but also Diedrich Bader, who plays a ruthless political suitor of Meyers this season.

Both shows seem to have the same message: Don’t be so greedy. But it makes those who aren’t so close to the center of power feel good. We would never take the moral shortcuts Selina does. Would we?

The fact that we just might makes “Veep” even funnier. The show works because all of its actors seem so human, so likeable, despite the words coming from their mouths. Right now Selina’s the vice president. But she might also be the other kind of vice president.