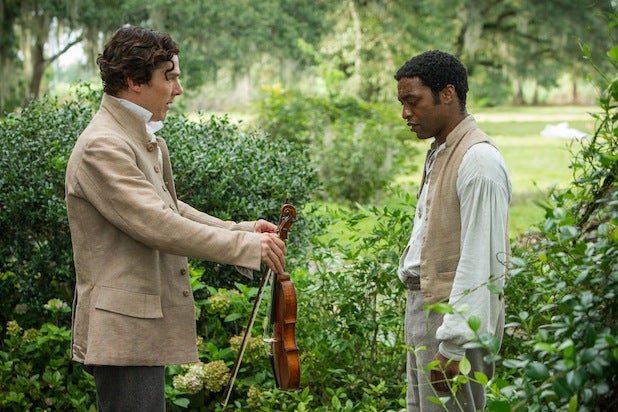 Steve McQueen‘s harrowing “12 years a Slave” has been named winner of the BlackBerry People’s Choice Award at the 2013 Toronto International Film Festival, TIFF announced at an awards lunch on Sunday.

The film, which is considered a leader in the Oscar race for Best Picture after triumphant screenings in Toronto and Telluride, won the strongest reaction from TIFF-goers who deposited their ticket stubs while leaving the theater or cast ballots online.

After its Friday-night screening, TheWrap called it “a brutal, scorching and unflinching work that is hard to watch and will no doubt be harder to forget.”

“The Square” won the award as the festival’s favorite documentary, while “Why Don’t You Play in Hell?” was named favorite film from the Midnight Madness section.

This year’s TIFF audience clearly preferred tough, substantial works over more conventionally crowd-pleasing films. The runners-up to “12 Years a Slave” were Stephen Frears‘ “Philomena,” with Judi Dench as a woman looking for the out-of-wedlock child the Catholic Church took from her decades earlier, and Denis Villeneuve’s tense kidnapping drama “Prisoners,” with Hugh Jackman and Jake Gyllenhaal.

The last six Oscar Best Picture winners have all screened at TIFF. In that time, the Oscar winner has captured the TIFF audience award twice: “Slumdog Millionaire” in 2008 and “The King’s Speech” in 2010.

“Ida” and “The Amazing Catfish” won awards from the international critics’ association, FIPRESCI.

In previous years, winners of the audience award included Oscar winners “American Beauty” and “Chariots of Fire,” as well as “Where Do We Go Now,” “Tsotsi,” “Hotel Rwanda,” “Whale Rider,” “Shine,” “Strictly Ballroom,” “The Fisher King,” “Roger & Me,” “The Princess Bride” and “The Big Chill.”

The award is open to any film that screened at the festival, apart from shorts and entries in the TIFF Cinematheque section. Contenders included Alfonso Cuaron’s “Gravity,” Jean-Marc Vallee’s “Dallas Buyers Club,” John Wells’ “August: Osage County” and John Carney’s “Can a Song Save Your Life?”