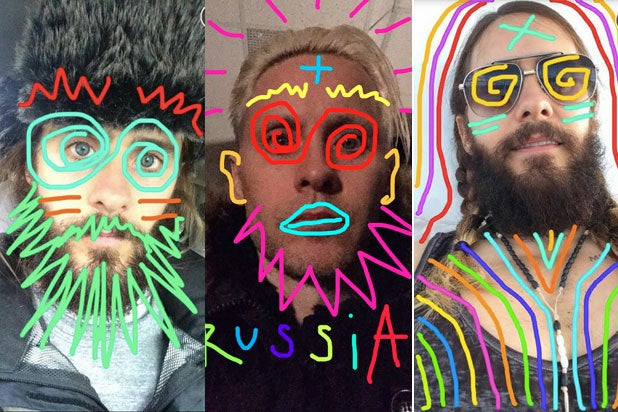 Finding Hollywood’s biggest stars on Snapchat is tricky. There’s no blue check mark. No verification process. No auto-populate field when you search for a name. Not even a follower count to gauge whether someone might be popular with other users. Usernames are distributed on a first come, first serve basis with no recourse for reclaiming a handle that’s already being used — a move that’s prevented some stars like William Shatner from signing up in the first place.

“I actually went and downloaded Snapchat only to discover that someone has my name. I don’t respect platforms that do that,” he said on Twitter.

Then why bother? While Snapchat’s format may be simpler to grasp for its 16 to 24 demographic, the messaging service is the fastest growing mobile app. It’s becoming a media powerhouse with its (easier to navigate) Discover tab for publishing partners and is looking to be a significant social tool in the 2016 elections. Already, politicians including Rand Paul, former Maryland Governor (and potential Democratic challenger) Martin O’Malley and Wisconsin Congressman Sean Duffy have used the app while Hillary and Chelsea Clinton delivered a special message on the platform for International Women’s Day.

With this in mind, TheWrap tracked the best (and legitimate) Hollywood Snapchat accounts. From Jared Leto and Arnold Schwarzenegger to Rihanna and Hailee Steinfeld, these are the celebrity social media trailblazers turned snappers who (in no particular order) are using the buzzy app to offer fans a largely uncensored glimpse into their lives, promote their projects and show off their digital flair — no matter what age demo they fall into.

Rihanna: rihanna
There have been Snapchat accounts masquerading as the singer for years but Rihanna didn’t officially join the platform until April. Since then, RiRi, her entourage and a couple of troll dolls have been featured in the disappearing snaps. The singer is a reluctant subject at times but always entertaining.

Arnold Schwarzenegger: arnoldschnitzel
California’s former governor hasn’t met a social platform he hasn’t managed to crush. But Snapchat is probably one of the best for showcasing Schwarzenegger’s playful personality, whether he’s visiting the Van Gogh museum in Amsterdam, goofing around on vacation or promoting the Arnold Sports Festival, which blew up when it became the feature of a crowd-sourced Arnold Classic Snapchat story shared with all 100 million monthly users and not just those who follow “arnoldschnitzel.”

Cody Simpson: aussiemuso
Simpson is an Australian pop singer and social wunderkind. His Snapchat account recently came under fire for allegedly exposing his girlfriend doing drugs. But more traditional snaps feature the laid-back artist performing, surfing or spending time at the beach with friends. “I think it would be an ignorant approach to not embrace the new way to promote and to share your stuff… It’s all about using every outlet possible,” he’s said of his approach to social media.

Hailee Steinfeld: haiz
Steinfeld is best known to movie fans for 2010’s “True Grit,” for which the teen was nominated for an Academy Award for Best Supporting Actress. But the LA-native and star in the upcoming “Pitch Perfect 2” is also an avid Snapchat fan who shares behind the scenes snaps from on set via her own account and from the movie’s marketing account with “Pitch Perfect 2” costar Chrissie Fit.

Jared Leto: jaredleto
Leto communicates regularly with fans across multiple social platforms, teasing the reveal of his “Suicide Squad” haircut on Twitter and Instagram recently. The actor’s championed Snapchat’s crude drawing tool, using the app to scribble messages and ask for fan feedback. But he’s best known for his psychedelic snaps. Whether at an awards show in Hollywood or on tour in Russia with his band Thirty Seconds to Mars, the Oscar winner’s specialty is decorating his Snapchat selfies with neon war paint.

Ryan Seacrest: ryanseacrest
Seacrest’s unique access to Hollywood’s hottest events and biggest stars is reflected on Snapchat much like it is online and on-air. The radio personality turned television host and producer gives his fans front-line access to New Year’s Rockin Eve, the Grammys, the Oscars and even his KIIS-FM studio with snaps of his cohosts and celebrity guests such as Taylor Swift, Ed Sheeran, 5 Seconds of Summer, Fergie, Jennifer Lopez, Selena Gomez and more.

Nev Schulman: nevschulman
A Facebook relationship that turned out to be fake and was captured in a 2010 documentary called “Catfish” catapulted Schulman to a high-profile career. He’s now the co-host and executive producer of the MTV series of the same name. But the TV host and self-described social media addict spends less time on Snapchat promoting his show than he does offering followers an authentic and unscripted window into his personal life.

Shay Mitchell: officialshaym
Mitchell is best known for her role as Emily Fields in the ABC Family series (and social juggernaut) “Pretty Little Liars.” The young actress is in the sweet spot for Snapchat’s demo, attracting young fans to her mix of on-set snaps and attractive selfies. And as the only one of the four PLL female leads active on Snapchat, her behind-the-scenes snaps are especially coveted for their exclusive access.

Keegan Allen: lifelovebeautyb
As a social media standout, ABC’s “Pretty Little Liars” series has helped garner its young stars massive fan followings across multiple platforms. Allen, best known as heartthrob Toby Cavanaugh on the show, offers fans an inside look at the making of the series. But Allen’s also used his social clout on Snapchat to promote his own career as a photographer and recently published a book of his work, “life.love.beauty.”

Kevin Jonas: kevinjonasii
The eldest Jonas brother is a self-avowed tech fan who’s launched his own app and likes to experiment with emerging platforms. “I just enjoy new stuff,” he recently tweeted to TheWrap after jumping on Meerkat. Jonas is currently working on a tool to give brands insight into their Snapchat audiences. He’s also used Snapchat himself for everything from behind the scenes snapshots while taping “Celebrity Apprentice” and screen time with influencers like Shonduras and Casey Neistat to a dentist visit and baby photos of daughter Alena.

Diplo: diplo3000
The music world has embraced Snapchat in a big way, using the platform to preview new music releases. But while some artists, such as Madonna, have used the platform for a one and done debut, Grammy nominated DJ and music producer Diplo is a power user. Recently, he used the app to tease a collaboration with Skrillex (aka skrilloo on Snapchat) and Missy Elliott and also shares candid snaps from the road turning a recent trip to South America into a Snapchat travelogue.

Fifth Harmony: fifthharmony
“Who’s on Snapchat? We are…” the girl group tweeted last September to their closed to 2 million Twitter followers. Since then the group formed on the second season of The X Factor has posted performances, fan encounters and rehearsal selfies. They’ve also used the platform to mobilize their Harmonizer fan base around the group’s first studio album, “Reflection,” using the mobile platform to officially announce the album’s track list before its February 3 debut.

Luke Bryan and Brett Eldredge: lukebryansnaps and brett_eldredge
The country singers get honorable mention as snapper newbies. They each announced their Snapchat accounts on March 9. Eldredge has used the mobile app to show his off his silly side, engaging in a staring contest with followers and posting snaps of his puppies. Bryan held a Snapchat scavenger hunt, hiding swag in a cooler in the sand at Panama Beach City for fans to find.