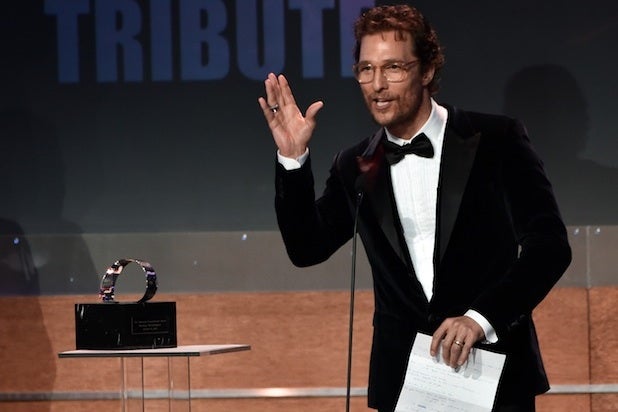 Matthew McConaughey accepted yet another award on Tuesday night at the Beverly Hilton Hotel, when the American Cinematheque made him the subject of its annual tribute.

McConaughey, after all, won the Oscar and the Golden Globe and the SAG Award and the Critics’ Choice Movie Award and a whole bunch of other awards for “Dallas Buyers Club” only a few months ago, and after that he picked up some more hardware for the HBO series “True Detective” (though not the Emmy, which went to Bryan Cranston).

So another 2014 honor for McConaughey might be a case of been-there-won-that, except that McConaughey is so darn charming and easygoing and likeable that who can begrudge him another night in the spotlight?

So with the Cinematheque looking for a suitable subject for its annual non-televised fundraising event, and McConaughey on the verge of returning to movie screens in Christopher Nolan‘s epic “Interstellar,” it didn’t seem as if there was any harm in adding one more bit of bling to the dude’s trophy case.

And with host Jimmy Kimmel summing up the guest of honor’s appeal by pointing out, “He’s more than just a pretty face — he’s also a hot body,” we even learned a few things we didn’t know about McConaughey during the two-hour event on Tuesday.

He’s in a Trisha Yearwood video.
The Cinematheque put together several films illustrating different parts of McConaughey’s career, none more entertaining than one drawn from his earliest screen appearances. (“Don’t forget to take a drink every time you see a bad haircut,” instructed Kimmel.)

And alongside scenes from “Dazed and Confused,” “Angels in the Outfield” and “Texas Chainsaw Massacre: The Next Generation” were some priceless moments from Yearwood’s 1992 music video “Walkaway Joe,” in which a short-haired McConaughey, shot in luminous black and white, plays the hunky beau destined to break our heroine’s heart.

He doesn’t just take off his clothes when he plays bongo drums.
McConaughey’s most famous nude scene may have been when he was arrested in Austin for playing bongos in the buff – an event mentioned onstage by producer Lini Fini Zanuck – but Kate Hudson had her own story of her “Fool’s Gold” and “How to Lose a Guy in 10 Days” co-star’s penchant for stripping.

Hudson, who did by far the night’s best McConaughey impersonations, said he and some friends once went with Hudson to her parents’ cabin, which is located in what she described as “bear country boonies.”  Late at night, she remembered, they realized that McConaughey had left the cabin – and since she didn’t think it was safe for him to be outside in the critter-infested woods, she went out to look for him.

“I found him standing on a rock, butt naked, howling,” she said. “I was like, OK, there’s Matthew McConaughey, and he’s fine.”

He named his dog after a sexual act.
“He has a dog named BJ,” Jennifer Garner said during her tribute to McConaughey. “And it stands for what you think it stands for.”

Of all McConaughey’s films, the ones that get the biggest reaction from an industry crowd are “Magic Mike” and “The Wolf of Wall Street.”
In a night of film clips, two films were clearly the audience favorites – and the Oscar-winning “Dallas Buyers Club” wasn’t one of them.

Instead, the crowd went nuts for snippets from McConaughey’s tour de force scene in “The Wolf of Wall Street,” in which he pounds on his chest and introduces to the scam that is Wall Street. And they really loved a few glimpses of “Magic Mike” – an opinion shared by presenter (and “Interstellar” co-star) Anne Hathaway, who devoted much of her speech to describing how she knew McConaughey was going to win an Oscar “when I saw you scissor-legged in ‘Magic Mike.'”

In that film, she added, McConaughey created “a thrilling, brilliantly realized stripper prophet … Your performance is genius, and it occurred to me while watching it that your are, too.”

Woody Harrelson and McConaughey have a bromance going on.
Harrelson couldn’t make it to the tribute, so he sent the night’s funniest video. In it, he pays tribute to his “True Detective” costar while riding a bicycle in circles and, at one point, picking his nose.

The key lines: “I’ve been thinkin’ a lot about you, brother.”

He flirted with Jessica Chastain‘s grandmother.
Another of McConaughey’s “Interstellar” castmates, Chastain, called her co-star the heart of the movie, and said that there’s little difference between his public persona and the real guy: “What you see is what you get.”

And to illustrate what you get with McConaughey, she told a story about bringing her family to an “Interstellar” screening on Monday night. “My grandmother was vibrating, she was so excited,” Chastain said. “She was ready to jump his bones.”

Then she turned to the guest of honor. “And you were so generous. You posed for, like, 12 photos. And you flirted with her.”

Christopher Nolan doesn’t think McConaughey is funny.
The director of “Interstellar” was the last presenter of the night – and, it should be noted, the only one who wasn’t female – and he claimed to have been confused by much of the talk that preceded him.

“A lot of the people up here tonight have talked about how funny Matthew is,” said the British director. “I have to admit, I didn’t find him funny in the slightest. I found him very serious. I’ve never worked with an actor as relentless in his pursuit of the truth.”

Nolan also doesn’t believe in the McConaissance.
The phrase designed to celebrate McConaughey’s recent career upswing got a lot of play on Tuesday night, but not everybody liked it. At the end of his speech, Nolan dismissed the phrase entirely.

“I’m not a believer in the McConaissance,” he said. “I think Matthew’s success of late is the result of us catching up to what he’s been doing.”

McConaughey got the part in “Ed TV” by spilling Coke on producer Brian Grazer’s coffee table, and then bending down and slurping it up.
The incident, McConaughey said in his acceptance speech, came in his first meeting with Grazer – and as soon as it happened, the producer said, “You’re funny. I didn’t know that.”

He’d rather make films than watch films.
McConaughey doesn’t shy away from seeing himself onscreen – in fact, he described the act of sitting at the Hilton watching an evening of film clips as “a tad overwhelming, but I must say, most all of that I enjoyed watching.”

But he admitted that he was never really a movie watcher: “I saw two films before I was 18, “King Kong’ and ‘Orca’ … While I didn’t grow up watching films, I have grown to love making films.”

He was never offered the lead role in “Titanic.”
Though he said he cut a lot of stuff out of his speech a couple of hours before the show, because otherwise it would have run 45 minutes, McConaughey did feel compelled to set the record straight about a longtime rumor.

“I did not get offered the lead role in ‘Titanic,’ as it has been rumored I did,” he said. Then he looked at his agent in the audience. “I didn’t get an offer, right?” he said. “Because if I did, we need to talk.”

He thinks that a good way to improve a movie script is to improve the offer.
These were words of wisdom from near the end of McConaughey’s typically gracious and entertaining speech, as he tried to impart what he’s learned over his 22-year career.