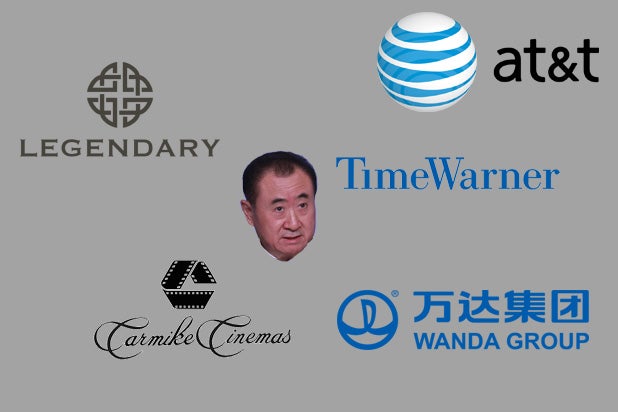 This year began with Dalian Wanda Group, a Chinese real estate and media conglomerate, buying the production company behind “Jurassic World” for $3.5 billion — which really summed up 2016 in mergers and acquisitions in a nutshell.

“That’s the biggest theme we saw in 2016 from the macro, sexy deal perspective,” he told TheWrap. “These big content deals from international buyers. From buyers that haven’t typically played in the content space — and that’s going to continue.”

And in the year’s biggest deal — and the biggest media merger in 16 years — one of America’s oldest telecom companies sought to join forces with one of its oldest movie studios and a handful of its biggest TV networks, when AT&T agreed in October to acquire Time Warner for $85 billion.

AT&T CEO Randall Stephenson, who will helm the combined company if the deal goes through, said he expects others to follow suit in a special conference call with analysts following the merger announcement.

“The next wave of integration in this business takes vertical integration of premium content and distribution,” Stephenson said. “And I expect the rest of the industry is going to innovate along with us.”

“As downstream distribution becomes more and more competitive, the value will flow upstream to the content owners,” he said. “It’s like salmon, value swims upstream.”

While Spiegel expects a continued seller’s market for premium content, he said M&A could also be catalyzed by companies trying to shed parts of their business that aren’t adapting as well to the new reality.

“You have traditional media companies out there or established media companies looking to shed underperforming assets so they can redeploy capital elsewhere in the market or more in line with their digital strategy or their growth strategy,” he said.

The emergence of a new streaming service seemingly every day — with AT&T’s DirecTV Now being the latest major entry — may have enhanced the value of premium content, as more distribution outlets are bidding for it. But as a material and growing number of cable customers ditch the bundle and sign up for one or more standalone streaming services, there might not be room for all of them to thrive.

Hale Boggs, the chairman of Manatt Digital Media, expects to see some of those individual over-the-top streaming providers get together.

“We’ll see a wave of consolidation, and it’s not too far away,” Boggs told TheWrap in August.

However, Spiegel isn’t so sure, saying that companies who have launched streaming services or invested in streaming video technology, like Disney, which spent $1 billion for a minority stake in BAMTech in August, have longer-term plans for the medium beyond whether an individual streaming product is an instant hit.

Also Read: Live Streaming Services Are All the Rage - But Are There Too Many?

“I don’t necessarily think there will be a lot of consolidation in the streaming services and platforms,” Spiegel said. “Because I think a lot of the companies that have acquired the tech are doing it for strategic reasons.”

That spending spree has recently raised red flags in D.C., with several legislators calling for a closer look on companies close to China’s censorious government potentially having an undue influence on media and entertainment. President-elect Donald Trump has also ruffled feathers with China, talking to the president of Taiwan in a lobbyist-organized phone call — a major diplomatic faux pas for a country that still operates under the “one China” policy, in which Taiwan isn’t considered an independent nation.

But although Spiegel acknowledges the political friction with China, he doesn’t expect that to tamp down the interest of several Chinese firms in American entertainment companies, both due to their content and the relative stability and maturity of the industry in the U.S.

“I do think there are geopolitical and financial advantages that the U.S. offers, as a relatively safe place to invest your capital,” Spiegel said. “And a lot of people realize that. The majority of content is being created here. There are economic forces behind that. It really is a motivating factor.”