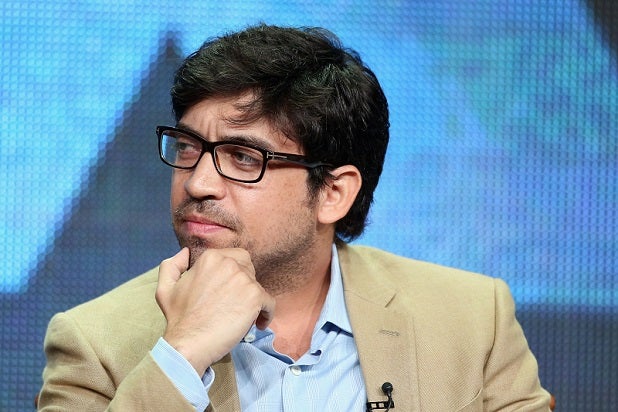 Ryan Murphy might receive the lion’s share of credit for “American Horror Story’s” spooky allure, but his is not the only vision that makes the creepy FX drama a favorite of chill-seeking TV viewers.

Alfonso Gomez-Rejon has brought his eye for spine-tingling detail to “AHS” as a director of a dozen episodes, including numerous entries for its most recent iteration, “Coven.”

The director scored two Emmy nominations for his work on the show this year, including an Outstanding Directing nod for helming the Season 3 premiere episode, “Bitchcraft.” Gomez-Rejon spoke to TheWrap about the white-knuckle experience of filming the Season 3 finale, his shocking binge-watching habits, and how Stevie Nicks made death-by-drowning seem like a touching experience.

TheWrap: What was the toughest thing you had to do this season?
Alfonso Gomez-Rejon: Finishing the last episode of the “Coven” season, “The Seven Wonders,” was definitely the toughest thing. It was an impossible — undoable — schedule, resolving every storyline, with heavy VFX, stunts, etc. But we had a hard out at 4 a.m.  Hours later, actors would be on planes and sets would be taken down. I had two full crews going in adjoining soundstages. I’d run back and forth between them, setting up a shot here, shooting there, changing the cast on set and rushing them back to the other stage, and so on. We finally wrapped a few minutes shy of 4 thanks to the heroic work of every department, particularly my VFX supervisor, who was directing the 2nd unit. Our last shot was Frances Conroy as Myrtle throwing glitter in the air (for the Stevie Nicks “video” opening of the episode). A surreal but poignant ending to the show followed by a lot of champagne.

What was the most fun thing you had to do this season?
Directing Stevie Nicks — things like that just don’t happen in real life. I stopped by her trailer in the morning to introduce myself and within minutes she was singing “Rhiannon” a cappella to me. She was fun, generous, humble and a great raconteur. I’m especially proud of her final scene as she plays “Has Anyone Ever Written Anything For You” to Jessica Lange‘s Fiona Goode. It’s so touching that you forget that she just drowned someone in a bathtub.

Let’s assume that somebody has never seen your show. What would you say to persuade them to watch it?
There has never been anything like it on television. It’s a hyper-real, cinematic experience showcasing some of our greatest living actors, writers and craftsmen working in the industry. You’ll be hooked after one episode, even if you hate horror.

Say you’re an Emmy voter, and you can’t vote for yourself or your show. Who’s at the top of your ballot?
Ryan Murphy. He gave me my first “directed by” credit with an episode of “Glee” in its first season, and he’s nurtured my career ever since.  Plus “The Normal Heart” was masterfully directed.  He and Fred Armisen are geniuses.

If you could work on any other show, what would it be?
A camera operator on “Portlandia.”

What was the last TV show you binge-watched? How many episodes did you see in a sitting?
A couple of months of “CBS Sunday Morning” in a day.

Is this the Golden Age of Television?
Yes. Certainly the new Golden Age.  Genres and formulas are being reinvented, even how we watch is new — we program ourselves. The material is rich, inventive. It’s where you the best actors and writers are working, where directors can have a point of view. There are just so many shows out there that it’s impossible to watch them all.