More than another close examination of the life and times of United Farm Workers leader Cesar Chavez, the documentary “Song for Cesar,” from co-directors Andrés Alegria and Abel Sanchez, constitutes a compendium of Chicano artists in the second half of the 20th century.  Across a multitude of disciplines, their communal motivator was social-justice advocacy.

Sanchez, a veteran musician turned first-time filmmaker, sets the tone with footage from Fantasy Studios (where the title track, an ode to Chavez, was recorded) before talking-head interviews and archival footage begin unspooling a thread that extends from his contemporaries to current performers like the band Ozomatli or songstress Lila Downs.

In this roll call of Chicano storytellers, the tunes serve as sonic picket signs and tributes to the power of organizing: Joan Baez’s “No nos moverán,” El Chicano’s “Don’t Put Me Down (If I’m Brown),” Little Joe’s “Viva la Huelga,” or Joel Rafael’s “El Bracero,” about exploited Mexican migrant farmworkers who arrived in the United States in the 1940s and 50s. 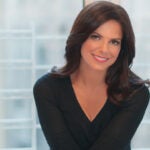 As part of their overview of the movement for better labor conditions, Alegria and Sanchez portray Chavez as someone attuned to the influence of popular art, passionate about jazz and an avid dancer. Photographs of the future hero as a young pachuco in a zoot suit give way to anecdotes about how later in life he found joy in collecting records.

The point, it seems, isn’t merely to humanize Chavez further but to note his conscious awareness of art as a resource in his non-violent arsenal to enact change in culture and, eventually, in policy. It was only natural that artistic expression permeated his activism.

With such a large number of subjects chiming into the chorus of memories, no one gets more than a handful of moments on screen in this historical melody of a film. Structurally, “Song” bounces between speakers and footage following thematic lines rather than precise chronology. Alegria, also the editor, effectively compartmentalizes each topic. 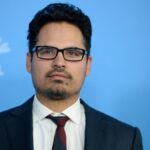 There’s renowned musician Carlos Santana musing on the spiritual determination of Chavez and everyone who followed him, Jose Montoya on the performance troupe known as the Royal Chicano Air Force, painter Malaquías Montoya about drawing inspiration from the fight, or Cheech Marin humorously recalling his own involvement.

A notable sidebar is dedicated to the late muralist Carlos Almaraz and his relationship with Chavez. Another documentary, “Carlos Almaraz: Playing With Fire,” focused solely on his eventful yet short existence, premiered in 2019 with some of the same voices included.

Of the many figures that share first-hand accounts of what they witnessed in those pivotal years, director Luis Valdez, founder of Teatro Campesino, is a recurrent voice. Here, however, there’s no mention of his film efforts — “I Am Joaquin,” “Zoot Suit,” “La Bamba” — only of his days out in the trenches. Seemingly, in an effort to highlight painting and music, his theater company and the actors in it don’t get much acknowledgment. 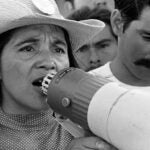 To speak on the applied notion of intersectional solidarity, the directors intersperse observations from non-Chicano allies: From Maya Angelou telling an anecdote about her son refusing to eat grapes at school during UFW’s nationwide boycott, to progressive white singer-songwriter Kris Kristofferson, and more directly to the joint efforts between Filipinos and Chicanos, in particular in the bond between Chavez and Larry Itliong.

For a longer discussion on the role of music in Chavez’s agenda, the doc touches on the fundraising concerts known as Fiesta Campesina that took place over several years in support of the farmworkers. Images of Chicano bands taking the stage to perform politically-minded tracks call to mind the Oscar-nominated documentary “Summer of Soul.”

And to signify the relevance of these songs in the present, Alegria and Sanchez include a segment dedicated to the moving ballad “De Colores,” which became an anthem for the movement, concluding with a live performance by a group of young girls (Los Cenzontles Coro Juvenil). In general, the all-encompassing approach of “Song” communicates how extensive Chavez’s reach was and the pride he instilled in an entire generation, even if one gets the sense of this being a sampler struggling to include everyone.

The fact that this utilitarian filmmaking facilitates the dissemination of ideas without great consideration for cinematic panache speaks in many ways to how the music, plastic art or stage plays born of the Chicano movement came from people rarely given spaces and resources to have their stories told with all the bells and whistles. This continues to be the case, as few U.S. Latino filmmakers have established careers in the entertainment industry.

Surely more pristine execution or aesthetic homogeneity in the interview footage would improve the film’s chances for exposure, but in this case, its very existence represents a victory. “Song for Cesar” manifests as the scrappy but meaningful results of people coming together to document a chapter of America’s recent past still not as visible as it should be.

For their long-gestating project (15 years in the making), Alegria and Sanchez banked on their access to talent, their thorough research, and the power of the testimonies and the music itself.  Rather than seeking to replace previous works in the same canon — such as Richard Ray Perez’s extraordinary “Cesar’s Last Fast” or Peter Bratt’s “Dolores,” a portrait of Dolores Huerta — “Song for Cesar” fills in a unique angle in the tapestry of Chicano history.

“A Song for Cesar” opens in US theaters March 11.