A listless thriller that can’t find its footing, “Abandoned” does occasionally rouse itself enough to suggest a better movie that never comes to pass.

Emma Roberts and John Gallagher Jr. are the new parents thinking about a move to the country, if only their real estate agent Cindy (standout Kate Arrington, “Mare of Easttown”) can talk them into it. Veterinarian Alex (Gallagher) is fully on board, especially when they see an old farmhouse that deserves its own feature in The New York Times’ Real Estate section.

A worried and solemn Sara (Roberts), though, seems more hesitant. She notices that this gorgeous house and its beautiful property (the movie was shot in North Carolina) have been on the market at a very low price for a while. You’d think she’d back out pretty fast when Cindy confesses the reason: 40 years ago, it was the site of a double homicide, and a lot more besides. 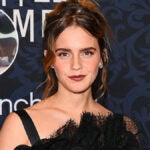 But, of course, there’d be no movie if they walked away, so — keeping with the chain of inconsistencies — she suddenly goes for it. As she tells a confused Alex, who has apparently never seen Roberts in “American Horror Story” or “Scream Queens,” “You know, I don’t mind a little haunting!”

Cindy has left Sara with an envelope that tells part of the tragic story, but their creepy neighbor Renner (Michael Shannon) drops by uninvited, to fill in some of the details. Actually, everyone in this stereotypical horror-movie town is creepy, including the laconic farmer (Paul Dillon) who hires Alex to care for his creepy pigs.

Meanwhile, Alex’s primary characteristic is his good-natured Brooklyn dad vibe, while Sara is almost entirely defined by her postnatal depression. First-time feature director Spencer Squire and TV writers Erik Patterson and Jessica Scott seem to believe this is all they need, hanging the whole movie around her fragile state. That their recent projects have been Hallmark movies like “Love Under the Stars” and “Love at First Bark” in no way precludes them from writing a genuinely scary movie, but they appear noticeably hesitant about pushing far enough to unsettle their audience. 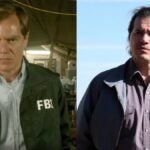 Roberts, in particular, isn’t given enough structure on which to build the depression and psychosis that threatens to break her character. Sara behaves sweetly, calmly, and lovingly to baby Liam (Marie May) throughout, until the plot requires otherwise. Everything about her scary condition and his overwhelming fussiness rings hollow when we’re told about them rather than shown them.

In fairness, Liam is presented as so easygoing and adorable that we do worry for the baby’s safety, given all the ominous creaking and ghostly door-handle jiggling going on around him as he plays happily on the wood floors. Then again, his cheerful and independent nature also undermines the empathy we need for his spiraling mother, particularly since Roberts doesn’t dig deep enough to make Sara’s depression feel real. 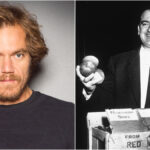 If the filmmakers are unwilling to delve into Sara’s emotional chasm, they might at least have had more fun with the vision of urbanites who assume rural life will be a breeze. Gallagher does lean into his character, offering a gently amusing picture of a young dad who unpacks his mid-century albums before the family even has electricity. But after he calls Liam “little man” for the zillionth time, we realize that’s all we get: he’s just a guy with a Park Slope beard, a Williamsburg turntable, and a mildly irritating nickname for his kid.

This brings us to Shannon, whose presence is this ghost story’s biggest mystery. He’s fine as the damaged Renner, adding some empathetic depth to a sketchily-written role. But he can’t do all the heavy lifting himself, so it remains hard to understand what inspired him to sign on in the first place.

Ultimately, the participants who come out best are production designer Madison Hatch and her team. Every rustic room offers distractions when the poltergeists fall flat. Sara may just be right: a little haunting is a small price to pay for a farmhouse with original floors and vintage molding.