The Abbey founder and president David Cooley greeted 500 of his closest friends at his birthday party at the iconic West Hollywood gay bar on Tuesday night and surprised guests with the announcement he had reacquired 100 percent ownership of the club.

After nearly 10 years in a partnership with hospitality behemoth SBE, Cooley is officially sole owner of the Robertson Blvd. hotspot, once reported as the largest vodka purchaser in the world and crowned “World’s Best Gay Bar.”

The celebration was being filmed and it turns out the cameras capturing his festive occasion were not just for posterity, but the footage being shot was setting the stage for an opening storyline of a reality series centered on the gay bar. And from the sound of it, the show is a perfectly cast “Episode 101” for a reality franchise.

“The show has to be in a positive manner,” Cooley told TheWrap on Friday. “It will not be ‘who is sleeping with who’ and me yelling as the ‘yelling boss.'” 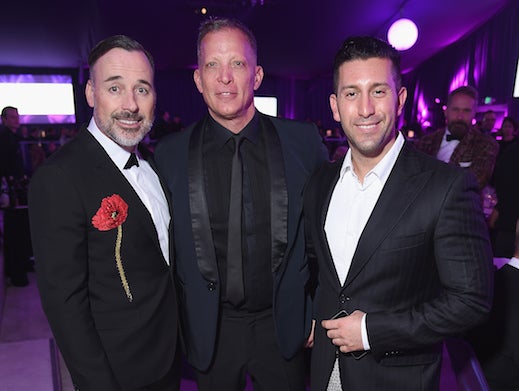 “Abbey” will be the second bar-focused reality series on the block, along with his friendly neighbors around the corner on Santa Monica at “Pump.” The swanky lounge owned by “Real Housewives of Beverly Hills” star Lisa Vanderpump is the center of Bravo’s hit “Vanderpump Rules.”

Reached at his home in Montreal, Canada, at the start of a three week birthday vacation that coincides with Montreal gay pride — a trip that began with a 6 person manifest and now tops out at 28 revelers across Italy and Ibiza — Cooley talked to TheWrap’s Party Report about his expansion plans for the Abbey (look out South Beach and New York), where he ranks in revenue amongst all L.A. bars, what a 4 a.m. last call would mean to his business, and how he accomplished an amicable business divorce with SBE founder Sam Nazarian in only six weeks.

TheWrap: How did the idea for the split from SBE come up?

David Cooley: Discussions were coming up about [me] getting The Abbey back. Sam is going in to another direction and he’s selling off his restaurants and nightlife group and focusing on his hotels. When I had this opportunity, I did not have to think twice to say I am interested in doing this.

What was it like being in business with SBE?
They let The Abbey be run by the owner, by myself, so I felt like I never left it. I made all the decisions. They were very supportive and I had a great back of the office team — from HR, to legal, to marketing and accounting.

There has long been talk about expanding The Abbey to other cities. Why not just incorporate it via Sam’s hotels?
I think my brand is unique enough on its own to be a standalone. My plan is to focus on the few projects that are in the works already and start looking for other locations.

Within LA or national?
National. When I do the first offspring, I would have to make sure that it is a city that can support it, such as New York or Miami, that I have my eyes on. I might like to revisit Chicago again, I just need to get familiar with those markets.

It would seem like you are poised for a huge revenue year in 2016.  Next year you will celebrate the 25th anniversary of The Abbey which presents a big marketing potential and I hear you are working on a reality show, which as we know draws in a whole new clientele and business. Why would SBE want to part [ways] now when you have such a promising financial arc on the horizon?
First of all, I like your thinking! I hope that the futures you are predicting all come true. But it was just time. The Abbey has been consistent with its sales for 25 years, and each year increasing. Sam has bigger projects on his mind and it was perfect timing. We just finished a beautiful birthday party and we, publicist Brian Rosman and my team, already have things in the works for our party in May for our 25th year.

So you’re going to have the party in May before June’s West Hollywood Gay Pride weekend?
Yeah. Most likely will be early May.

By the time we get to May, can we expect that there will be two David Cooley-West Hollywood locations for the parties, adding your long in the works Cooleys?
I better have Cooley’s open by May. They are telling me six months, so by May it should be open. Definitely.

What’s going on with Cooley’s? The Santa Monica Blvd. project condensing three properties to a new restaurant encountered some friction along the way. Who is the person that’s giving you headaches and standing in your way on Cooley’s right now?
As of right now, no one. I have a great team around me now that even though I am on a three week holiday, since I’ve arrived here last night all I’ve done is be on the phone. I have to keep things going. Full steam ahead for the Cooley’s project, and some changes within the Abbey.

You think of the Abbey as a nightclub, but I have a whole pastry chef team. We have 230 employees.

If you go forward with the “The Abbey” reality show, will you keep these employees or will you do what other venues have done – cast “staff” to come in as the faces?
Absolutely not. Absolutely not. Absolutely not. The show has been cast. It has not been revealed yet. I am only using my staff. The show has to be in a positive manner — not ‘who is sleeping with who’ and me yelling as the ‘yelling boss.’ We did our first taping of the birthday at my birthday and party the announcement of the purchase or me buying it back.

Is the show going to be called “The Abbey”?
We’re starting to film now and we’ll see what happens.

Could guests be at The Abbey and see cameras and end up on camera?
(Defers to publicist)
Publicist: If you were there on Tuesday night, you would have seen cameras. And if you’re there soon, you’ll see cameras.

How is the reality show shooting and development going over with your neighbors around the corner? (Lisa Vanderpump and Ken Todd  run West Hollywood hotspot Pump and star in the Bravo series “Vanderpump Rules,” covering the personal lives of the restaurant staff)

We’ll have better ratings (laughing). Lisa and Ken are wonderful, wonderful, neighbors. They are so wonderful. We have so much fun being neighbors. I stop over there for drinks. They stop over to my place. I actually went to them and asked their advice about doing the TV show and they were wonderful.

What did they tell you?
They told me the goods and the bads. As we were talking, at least four people came up to them and asked for pictures.

They said ‘You better be ready for this.’ I said ‘I am not as much,’ but I of course being in our business, with me being at The Abbey all the time, I said ‘I am used to that.’ I have no problem. I talk to a bunch of people and I love going up and meeting new friends and thanking for them to coming to my business. I’m not afraid about (fan interaction).

[Ed. Note: Cooley declined to provide specifics about whether a network, or which one, had commissioned the shooting underway, but did say that he is not self-financing the production. Cooley is working with Banijay, the reality production company headed by former Endemol topper David Goldberg, that also counts “I Am Cait”, the Kardashians franchise, and E!’s “Total Divas” amongst its formats.]

I say that L.A. has a false reputation for good nightlife. How would life change for you if L.A. moved to a 4 a.m. last call time?
I would be very, very pleased. There was just an initiative that was brought up last year and it did not go through. I would be very happy in terms of the business sense.

When it comes to saying L.A. does not have the best nightlife, then you have not been to the Abbey. I got in a car once and (my friend) said ‘Take Mr. Cooley to The Abbey.’ The driver goes ‘When I pick people up, it’s usually Disneyland or the Abbey.’ It was a great compliment. He had no idea that I was affiliated with the business.