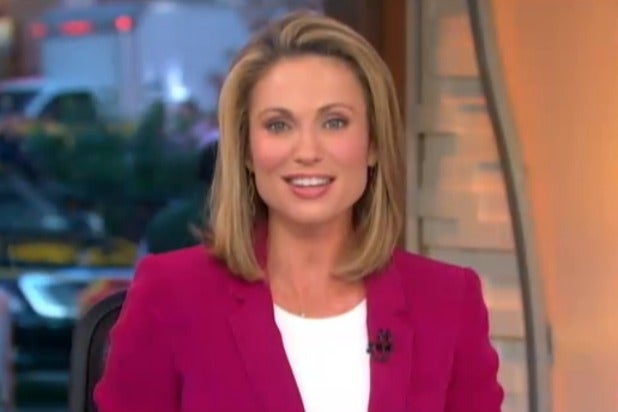 It’s pretty common for news anchors to undergo cancer screenings to encourage viewers to do the same — but it saved Amy Robach’s life.

The ABC News correspondent and anchor was asked by her producer to undergo a live television mammogram for “‘GMA’ Goes Pink” day, and reluctantly agreed, she said Monday. The Oct. 1 test resulted in a breast cancer diagnosis, and she will undergo a double mastectomy Thursday.

“While everyone who gets cancer is clearly unlucky, I got lucky by catching it early, and there are so many people to thank for making sure I did. Every producer, every person who urged me to do this, changed my trajectory,” she said in a message to viewers. “The doctors told me bluntly: ‘That mammogram just saved your life.'”

Robach, 40, said she never suspected she had cancer, but agreed to be tested because her producers and cancer survivor Robin Roberts convinced her it would save lives. It turns out to have saved at least one.

Here is Robach’s message in its entirety, from the ABC News site:

I remember exactly where I was when I got the call from a “Good Morning America” producer. I was about to interview Marie Monville, the wife of the Amish school shooter, in the bucolic setting of Lancaster, Pa. She was speaking out about the senseless horror that happened in the most unlikely of places.

I was focused on what was about to be an emotional interview regarding life after tragedy, when our producer asked me if she could make a sensitive request: “Amy, next week we’d like you to do the first ever live television mammogram for ‘GMA’ Goes Pink day. You’re 40, the age women should start getting mammograms. Would you even consider it?”

It felt like a strange thing to consider given where I was and what I was about to do, but oddly now, it all feels connected.

For the past 20 years, sadly, a large part of my job deals in tragedy — other peoples’ tragedies — but never my own.

That day, when I was asked to do something I really didn’t want to do, something I had put off for more than a year, I had no way of knowing that I was in a life-or-death situation.

Sitting in that kitchen with Marie Monville, I had cancer and didn’t know it. In fact, I would have considered it virtually impossible that I would have cancer. I work out, I eat right, I take care of myself and I have very little family history; in fact, all of my grandparents are still alive.

So in the days to follow, if several producers and even Robin Roberts herself hadn’t convinced me that doing this on live television would save lives, I would never have been able to save my own.

So on Oct. 1, I had my first mammogram, in front of millions of people.

After breathing a big sigh of relief once it was done, my breath was taken away only a few weeks later.

I thought I was going back in for a few follow-up images, only to find out in a matter of hours that I had breast cancer.

I was alone that afternoon, never thinking to bring anyone with me, never thinking that day would be life-altering. My husband was on a business trip and my parents live across the country, but that night everyone flew into New York City and we started gearing up for a fight.

On Thursday, Nov. 14, I will go into surgery where my doctors will perform a bilateral mastectomy followed by reconstructive surgery. Only then will I know more about what that fight will fully entail, but I am mentally and physically as prepared as anyone can be in this situation.

And while everyone who gets cancer is clearly unlucky, I got lucky by catching it early, and there are so many people to thank for making sure I did. Every producer, every person who urged me to do this, changed my trajectory.

The doctors told me bluntly: “That mammogram just saved your life.”

I was also told this, for every person who has cancer, at least 15 lives are saved because people around them become vigilant. They go to their doctors, they get checked.

I can only hope my story will do the same and inspire every woman who hears it to get a mammogram, to take a self exam. No excuses. It is the difference between life and death.