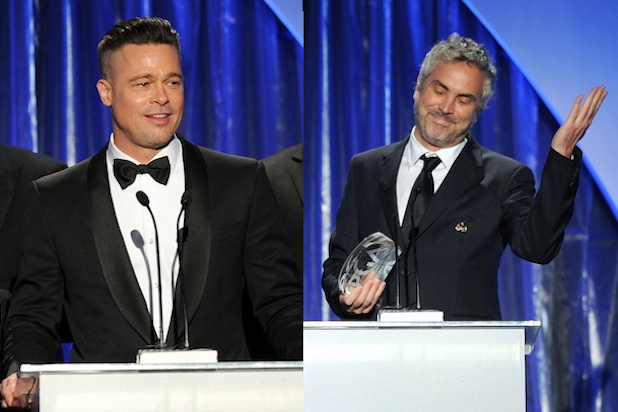 We may not know what film is going to be named Best Picture at the Academy Awards on March 2, but here’s one thing we do know:

Unlike the Producers Guild Awards on Sunday, the Oscars will not end in a tie.

That’s because the preferential system used to count ballots makes it easy to use tiebreakers to resolve a deadlock and select a single winner. The PGA does not have a tiebreaker system in place – but in response to an inquiry from TheWrap,  the Academy and PricewaterhouseCoopers said that the Oscars would indeed use tiebreakers to determine a single Best Picture.

“For the Oscar finals, a variation of preferential voting is used for Best Picture,” said the AMPAS statement. “Voters rank their choices in preferential order and the films are then eliminated in the same manner that is used for the nominations.

“The ultimate goal is to determine the film that has support of 50% plus one vote of the overall voters.  Like the nomination tabulation, tiebreakers are used and the system could resolve the situation he [TheWrap] puts forward with a single winner.”

The Producers Guild tie between “Gravity” and “12 Years a Slave” was a stunner for many reasons, among them the fact that it was the first time any of the major Hollywood guilds had declared a pair of winners in its top film category.

But what made the whole thing even more bizarre was that it came in a category that counts its ballots using the preferential system.

When you use preferential to determine a single winner in a race with multiple candidates, as the PGA and the Academy alone do in final voting for their best-picture awards, every single ballot comes into play.

The PGA has more than 6,000 members, and for the sake of clarity let’s assume that exactly 6,000 voted. (That’s no doubt a generous assessment, but it makes the math easier.) Voters were asked not to simply vote for a favorite, but to rank all 10 nominees in order of preference.

The accountants (or their computer program) would have begun by separating the ballots into stacks based on each voter’s first choice. If any film got 3,001 first-place votes, the count would be over and a winner would be declared.

But since nobody got that many, the film with the fewest first-place votes was eliminated from contention, and each of its ballots was moved into the pile of its voter’s second choice.

This would have gone on and on, with ballots for the least popular film redistributed in each round until only two films remained.

The count concludes whenever one film passes the 50 percent threshold – but in this year’s PGA count, no film ever did.

In the end, every film except “Gravity” and “12 Years a Slave” would have been eliminated, with the outcome hinging on a simple question: Which of those two films did the most voters prefer?

At that point, it didn’t matter if “Gravity” and “Slave” were ranked first and second on a voter’s ballot, or third and eighth, or ninth and 10th; all that mattered was which one was higher.

But wait… Once you’ve come to a tie in preferential, the paper trail would make it a simple matter to break the tie by determining which of the two films got more No. 1 votes. If that was also even, you could see which got more No. 2s – and so on, until one of the contenders emerged with an edge.

The Academy’s vote-counters would use the built-in tiebreakers to prevent two film teams from ending up on the stage of the Dolby Theatre at the end of Oscar night. But in response to a question from TheWrap, a spokesperson for the PGA said that the guild “does not have a tiebreaker system in the event of a statistical tie.”

So they went with two winners, making the Oscar race just that much crazier and more confusing.