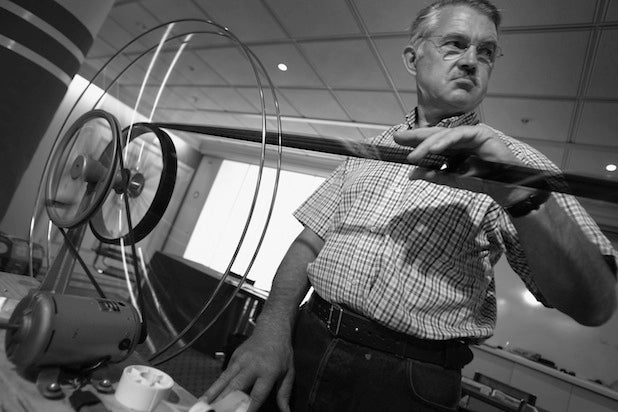 The Academy’s Scientific and Technical Awards are usually one of the most forward-looking of all the Academy’s endeavors, a night dedicated to honoring the innovations and breakthroughs that point the way toward the future of filmmaking.

But when this year’s Sci-Tech Awards take place on Saturday at the Beverly Hills Hotel, the Academy will take a long, fond look to the past, not the future, and to a dying technology rather than a developing one.

In what promises to be one of the most emotional Sci-Tech moments, the Academy will award a group Oscar to “all those who built and operated film laboratories” over the past 100 years. Richard Edlund, chairman of the AMPAS Scientific and Technical Awards Committee, calls it “a generic and symbolic award,” the first ever handed out by the Academy.

“This is the kind of thing that the Academy should do,” Edlund told TheWrap. “The Academy has been pushing the big screen for all of its years, and this year is the perfect moment for it — because next year, there will be very few film prints made.”

He ticked off the signs of the impending death of film: One of the two historic film labs, Deluxe, has closed down labs in London and New York, while the owners of the other, Technicolor, have put the Hollywood real estate of its Sunset Blvd. lab up for sale. Paramount, meanwhile, announced that “Anchorman 2” would be its last film ever to exist in 35mm print form.

“These are all indications of the end of photochemistry as a delivery medium for the movie industry,” said Edlund. “Everybody has moved into the digital world.”

As a veteran of the the visual-effects field, Edlund doesn’t necessarily feel that the move to digital is a bad thing: “The visual-effects business is where digital got its start in Hollywood, because we had come up against the brick wall of photochemistry and taken that as far as it could go,” he said.

But when Colin Mossman of Deluxe Laboratories came to the Academy about three years ago and pitched a Sci-Tech Award for Deluxe and Technicolor, Edlund thought there was something to the idea.

“It wasn’t comfortable to me to just give it to those labs, because who would pick it up for them? [Ron] Perelman, who bought Deluxe as a financial device? So we formed a committee to really examine the idea, and decided it would be better to make it a symbolic award to all the people who devoted their lives to film developing and printing over the last 100 years, without whom we would never have had an industry.

Also read: Oscars to Celebrate 75th Anniversary of ‘The Wizard of Oz’

“They’re kind of the unsung heroes of the movie industry,” added Edlund (right, at last year’s Sci-Tech Awards). “They provided the beautiful black-and-white printing of the ’30s and ’40s, and all the color enhancements that happened since then. They’ve given us technological developments, as well as the sweat of getting the dailies every night and having them ready for the directors every morning, and making billions of feet of release prints a year.”

Once the idea of a symbolic award came up, he said, the Board of Governors approved it unanimously. “When we laid it out like that, it became obvious.”

But when you’re handing out a symbolic award, who gets to accept it and who gets to keep it?

Edlund will only say that the award is going to be “accepted on behalf of all these people by a famous director” on Saturday night. (It’s not hard to think of a couple of very famous directors, including one who’s Oscar nominated this year, who are longtime proponents of film and film preservation.)

As for the Oscar statuette itself, it will be displayed in the lobby of the Academy’s Samuel Goldwyn Theater in Beverly Hills until the Academy Museum of Motion Pictures is completed in 2017.

At that point, Edlund said, “It will be moved to the museum and mounted in a promiment place for all of those who have kin or forbears in the lab business, who can see their Oscar.

“This is an Oscar that all those people can call their own.”