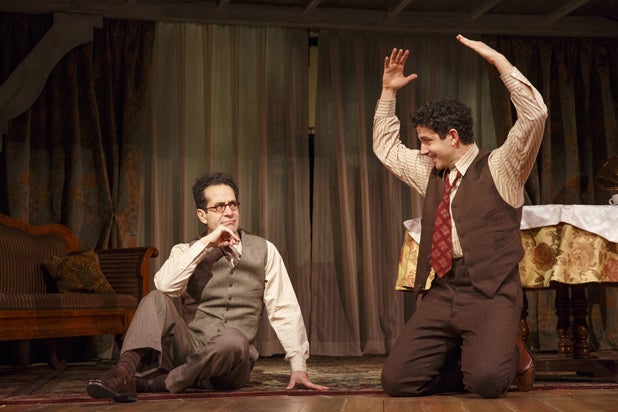 James Lapine must have memorized Moss Hart’s classic memoir of a life in the theater. He has spent years adapting “Act One” to the stage, where it opened Thursday under his direction at the Vivian Beaumont Theater. He probably knows the book as well, if not better, than anyone else on the planet.

It’s strange then that this writer-director has not heeded the book’s advice on how Hart, then a novice playwright, was able to turn his own floundering show “Once in a Lifetime,” co-written with George S. Kaufman, into a big hit on Broadway in 1930.

In the book “Act One,” as well as its stage adaptation, the producer of “Once in a Lifetime” tells the very young Hart that he’s written a good but “noisy” play, although noisy may be the wrong word: “That stage is so damn full of actors and scenery and costumes and props all the time [theatergoers] never get a chance to catch their breath and listen to the play.”

The Lincoln Center Theater production of “Act One” boasts 22 actors, most of them playing multiple roles, and there’s a constantly revolving set of three tiers that features more than a dozen locales ranging from rooftops to stoops to alleys to theaters to offices to restaurants to speakeasies. Designed by Beowulf Boritt, this cityscape makes the original set for “Sweeney Todd” at the old Uris Theater look like a kids’ jungle gym.

The producer in Hart’s book wasn’t sure about the word “noisy.” Regarding Lapine’s “Act One,” the word “fast” is closer to the mark. Especially in the first act, the numerous scenes fly by, sometimes literally on that revolving set, with no room for the audience to breathe and feel what the young Hart must be experiencing in his rise from poor boy to office boy to Poconos social director to playwright with a Broadway-bound play.

Actually, in act one of Lapine’s play, Hart has two Broadway-bound plays, “The Beloved Bandit,” which never gets to New York City, and “Once in a Lifetime,” whose tortuous journey to success is the subject of the second act.

Hart is played by a trio actors: Matthew Schechter, the boy; Santino Fontana, the young man; and Tony Shalhoub, the mature Hart, who narrates most of the play. But it is Fontana whom we follow as the young playwright. In the book, he suffers depression, career betrayals and public humiliations, and he envies coworkers their success.

Friends get the breaks he doesn’t, and he’s forced to spend yet another summer in the Poconos as the other social director goes off to a fabulous career somewhere. While those years as an office boy and a lowly camp employee go by pretty fast — Hart is only 24 when he embarks on “Once in a Lifetime” — the impression the book leaves is one of a long, grueling grind to nowhere. It’s an eternity for anyone that age who’s working in the mailroom, typing, gofering, not working.

Lapine and Fontana convey none of this youthful angst. Their Hart enjoys a meteoric rise of unbelievable good luck where every betrayal or failure is merely a comic anecdote to be retold, usually by Shalhoub, with fond memories attached.

Lapine is better with the personal, poverty side of Hart’s life. The incessant bickering of Dad (Shalhoub) and Mom (Mimi Lieber) and Aunt Kate (Andrea Martin), as well as the tenants who live just on the other side of the dingy apartment’s many curtains, is all rendered in spirit-crushing detail.

But oh, those wacky, colorful characters in the theater with whom Moss gets to play every day when Mom and Dad aren’t around!

Lapine’s act two, which is devoted to the rewriting and production of “Once in a Lifetime,” bubbles along with the same antic effervescence until all suspense regarding the fate of this endangered play has evaporated in good spirits. Since “Act One” has to be one of the most suspense-driven books ever written about any endeavor, the lack of drama generated on stage about the fate of “Once in a Lifetime” constitutes a major disappointment.

As Hart’s dreams of a successful play begin to disappear, Fontana turns angrier and brasher to emerge as downright spoiled, as if his Hart didn’t have enough hard knocks in his very short career to know how to take the real punches. In the book, he’s admirable in his determination; on stage, he’s kind of a brat.

Almost all of Lapine’s actors play multiple roles. They’re in and out of so many disguises so quickly it’s hard to judge some of the performances. You can keep the characters straight, but the rapid changes rob the fraught production of “Once in a Lifetime” of any human desperation.

In the book, you can’t help but sympathize with the cast as they struggle to make sense of a constantly evolving script on the eve of the Broadway opening. On stage at the Vivian Beaumont, these distraught actors aren’t even properly identified. One of them is Kaufman, who, in addition to performing in “Once in a Lifetime,” co-wrote and directed it.

With “Act One,” Shalhoub also does triple duty, playing not only the mature Hart and Hart’s father but Kaufman, as well. Watching Shalhoub’s many physical transformations is one of the production’s greatest pleasures and its major element of suspense, since the costume changes are super-fast. It helps, too, that Shalhoub presents a highly disciplined neurotic, a writer who is as idiosyncratic as Fontana’s writer is a cipher — when he’s not being a spoiled brat.

Andrea Martin is also fine in multiple roles, even though her Aunt Kate in no way brings to mind Blanche DuBois, as Hart suggests in his memoir. Maybe Blanche knew to stay where Tennessee Williams put her.