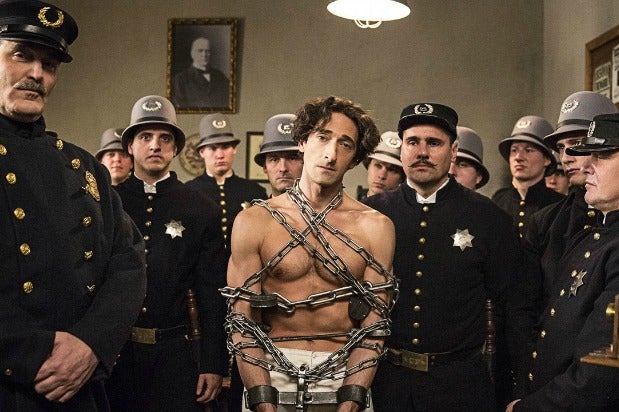 “In one way or another, we all want to escape,” Adrien Brody says at the start of “Houdini,” History’s new two-part film. “An ordinary life shackles us. We need to get away. Get away from boredom, from pain, from fear.”

Brody, who performed magic tricks as a child as “The Amazing Adrien,” says both acting and magic provide escapes from normal life – though not from boredom, pain or fear. Since becoming the youngest Best Actor Oscar winner a decade ago — for Roman Polanski‘s World War II film “The Pianist” — he has searched hard for roles he believes in.

“Houdini” marks Brody’s first television work since his Oscar. The film takes a write-the-legend approach to the life of the master magician, one of Brody’s boyhood idols. He not only makes long-silent bells ring for a young Anastasia, but he does so while carrying out a secret spy mission.

The film asks you to question how much really happened and how much is fiction – just like you might while watching a great trick. Brody talked with TheWrap about the truth behind the illusions.

TheWrap: Can you talk about being a child magician?
Brody: I really loved magic and I think all boys could relate to that, and the excitement of kind of pulling the wool over people’s eyes and defying the laws of nature. It’s very empowering for a kid, and there’s a mischievous quality to it.

Houdini really was the father figure in that world. He was a giant and had a fearlessness. There was something about even metaphorically overcoming the obstacles that a boy can relate to.

Did magic lead to acting?
Yeah, I feel like there’s a very clear line of me transitioning from a love of magic to a love of acting. In a way when magic became less alluring to me, the process of acting — and understanding character and actually achieving that, and feeling and reaching that elusive state of mind where you’re truly feeling something that is not your own, and either being moved to tears, or genuine laughter — is magical. And unpredictable. And you are essentially conjuring this up. You are tapping into empathy and an understanding that you wouldn’t necessarily have without cultivating it and cultivating your own vulnerability and really kind of fearlessly going there.

On a basic level, at the age of five or six when I started loving magic and I would get a magic trick and run around and perfect it and try it out on people, you come up with a pattern. You basically make the storytelling of it your own, which is essentially improvisation and a monologue and you’re a character. You’re becoming the show … I would put on the schtick.

Also read: How Hitler Got That Mustache, and What Else We Learned From ‘World Wars’

In your voiceover as Houdini, you talk about using magic to escape a normal life. Did acting help you escape a normal life?
Clearly. It is definitely not a normal life, and it is a blessed life. It is a complicated one and full of lots of beauty and sacrifice, but a lot of blessings along the way. And definitely a very interesting profession and I have tried to pursue roles that are vastly different from ones I have played in the past. Experience is always unique.

You mentioned the sacrifices. I think from the outside, it looks like a great job.

And I can understand that, of course. And it is a great job. The handful of people who have the good fortune of being successful, it lures in hundreds of thousands of aspiring actors who struggle. Who struggle deeply and live that sacrifice on a daily basis, and their talent and dreams and aspirations are not fulfilled. Not because of a lack of hard work, but because there isn’t enough brilliant material out there.

It is obviously a very competitive profession. It takes a tremendous amount of luck to be at the right place and the right time and to nail it when given the opportunity.

And there are great amounts of time where you are away from family and loved ones. I have a very nomadic existence, which is exciting, but not always as glamorous as it seems. I’ve explored the world as a result of that, and I feel very in touch with — the world.

Also read: Adrien Brody Does Not Lead a Normal Life

But now here I am in New York, and I realize I haven’t been here for any length of time in about a year. And this is home. I walk down certain streets and I don’t recognize ‘em.

It’s funny because when acting or magic become your job, they do become your normal life. Like today, you have a schedule. You have to make a bunch of phone calls to do interviews.
For sure. That is when you have the order in your life. It requires a tremendous amount of discipline. It’s when you’re not working — there’s also that aspect that’s very challenging. To be a freelance artist, basically, and go from the intense six-day, 12- to 18-hour workdays at odd hours immersed in the shoes of somebody else, then bouncing back and coming home to your city and trying to reconnect with your life, and friends and loved ones and not have a job. And be waiting for an interesting script to come along. They’re polar opposites.

Did winning the Oscar at 29 take some pressure off, or put more pressure on you?
I would say both. It took pressure off for me, on myself. I had reached the highest accolades someone in my profession can achieve, and for something that I had worked very hard on and devoted a great deal of suffering to. And gained great understanding of the profound loss that people have unfortunately had to endure in this world. And the cruelty that exists in this world.

But at the same time, it gave me insight and humbled me and gave me appreciation of all the little things that I took for granted that a young man often does who is not afflicted with those hardships. I understood the value of the immersion into the character, and the insight that was given to me by someone like Roman, who had firsthand experience and such tremendous loss, and represented this ability that we have the potential to survive and endure and to triumph above all these things. In that sense I accomplished my goals and my dreams, and the world was conscious of that, and applauded me for it. And that’s a remarkable thing for an artist. I’m grateful for it.

The flipside is that if you set the bar so damn high, I think people have an expectation that you can churn out greatness. But it is a collaborative profession and you need material and a filmmaker to guide you. Unless you are creating the work yourself, you are only able to inhabit the roles that are available.

And unfortunately even the films that I have not been in, there haven’t been many films of that caliber that I could easily discuss with you right now since then. Of course when you understand the process and also have an expectation to deliver a great in-depth portrayal, you need to search for those. But I have less to prove. And I think that is very important for an artist.

Houdini, I feel, struggled with having to prove something constantly, and was much more driven by proving that he was the best. I don’t feel the need to battle with that within myself or with others. I work to deliver the most sincere interpretation that I can and hope for the best.

How is it different to carry a movie like “Houdini” and be part of an ensemble carrying out one person’s vision, like Wes Anderson‘s “Grand Budapest Hotel”?

They’re vastly different experiences. It’s definitely more challenging to carry the weight of a historical figure in a piece that is nearly four hours in length that spans his childhood through all the trials and tribulations and successes and failures along the way. So that would clearly be a greater challenge and burden. But there are also challenges to come in with a director who has such a clear vision such as Wes and be one of many characters and resonate and have a profound effect with much less screen time.

Collaborating with Wes is really a blast, and I love his sense of humor. He has a real unique storytelling approach that’s really fun to get to play around with, and to work with actors like Willem [Dafoe], that’s very rewarding.

“Houdini” premieres Monday at 9/8 on History.