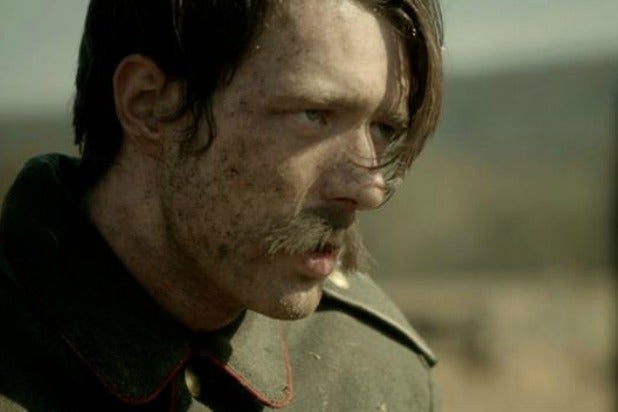 History’s “The World Wars” begins with German soldiers in a trench, pulling gas masks over their faces. A skinny private with a bushy mustache finds that his mask won’t seal because his whiskers are too thick. As soon as the gas clears, he takes out a knife to cut his mustache into a compact rectangle.

Executive producer Stephen David, whose “Men Who Built America” was also Emmy-nominated last year, talked to us about how he brought two World Wars to life. The three-part series blends re-enactments, archival footage and interviews with some of the most famous warriors of the modern era.

Why begin the series as you did?
We were doing a lot of research and when we found that story, we thought, oh right. The mustache. It’s the iconic thing about Hitler. We could just open the show with it. It was our favorite fact that we found out.

Also read: Emmys: How ‘The Men Who Built America’ Compare to Steve Jobs

How did you research this film? Is everything precisely accurate, or dramatized? I’ve also read, for example, that he was ordered to cut the mustache.
We’re trying to be as factual as we can. Sometimes we have to compress time. He wasn’t ordered to shave the mustache, but actually he shaved the mustache while he was in the hospital. Budget-wise, it would have been tough to film there as well as in the trench.

We don’t have very big budgets to make these. It’s always a big challenge to see how we’re going to pull off two wars with the budgets we have. It’s more in line with a reality show than a scripted show.

We could not find a Hitler. Anybody that came in, they all felt very cartoonish. There was a guy from “The Men Who Built America” who had a small part, but he was a really good actor. I remember looking at his picture and thinking, ‘I really think that guy could be Hitler.’ He embodied him so well, and then we brought in makeup and hair people and we probably worked for a week on all of it and there’s a lot of prosthetics. We did a lot of work on him.

You talked to people like John McCain, Colin Powell, Stanley McChrystal and Dick Cheney. It’s interesting to see people who are sometimes controversial figures today giving perspective on these figures from generations ago. For example, we hear Sen. McCain talk about Patton being egotistical.
We never want to skew Republican or Democrat or this is right or this is wrong. … The biggest thing that we decide when we’re putting something in is whether they speak about something passionately. You can kind of tell. And those are the bites that, when you’re watching, feel the best. I mean McChrystal just knew so much. That’s why he’s in it so much.

There was a bite where Cheney said, between the wars, about isolationism: What, were we just supposed to go to war when there was no war even started? It was like, ‘Wait, wait, wait. Did he just say that?’ We put that in.