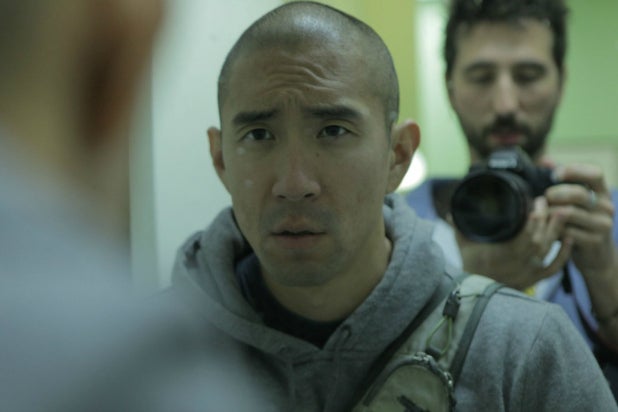 If you ate too much candy corn, and someone showed up with a better, more interesting kind of candy corn, your mouth would be so sick of the waxy treat that any improvements in the latest batch would be difficult to appreciate.

The film also winds up delving into another, equally tired horror sub-genre, but to give too many details would constitute a spoiler.

Ever since the massive success of “The Blair Witch Project” in 1999, we’ve had to follow any number of hand-held-camera­-wielding victims as they take us into various hearts of darkness, and it’s become something of a horror cliché, especially since that style of shooting has now branched out into comedies (“Project X”) and superhero movies (“Chronicle”).

Points to filmmakers Derek Lee and Clif Prowse (who wrote, directed and star as “themselves”) for finding some new twists along the way to make “Afflicted” a standout among its peers. When all is said and done, however, their innovations aren’t enough to justify traveling this path once again, particularly once we figure out what’s going on.

(Incidentally, one of the film’s major weaknesses is that these characters are supposedly film-literate, and yet the audience can figure out what’s happening long before the fictional Derek and Clif do.)

“Afficted” begins with Clif and Derek’s party to celebrate their impending world tour, in which the late-20-somethings will take a year off and explore the planet. Naturally, they’re going to do so with a ton of cameras in tow, documenting everything for their website and an eventual documentary feature.

The two hook up with friends in Barcelona, and then it’s off to Paris, where Derek hooks up with the sexy Audrey (Baya Rehaz) at a nightclub. Clif and his buddies decide to prank Derek by bursting into the room, but when they arrive they find Audrey long gone and Derek passed out in bed with a big gash in his arm.

Derek insists he’s OK, but on their next stop in Italy, he’s spending lots of time asleep and he can’t keep food down. Then, suddenly, he’s able to jump to great heights and run really fast, and while Derek and Clif think this is really cool, viewers know that things are going to get a lot worse for our merry travelers.

The opening sequences of “Afflicted” captures the “Real World”/”Amazing Race” aesthetic dead-on; not so much that it plays like satire, but it momentarily lulls us into thinking we’re getting an entirely different kind of movie. Lee and Prowse are fluent in the language of webcams and documentary-filtered-through-reality-TV, and it’s a skill they put to good use throughout the film. And like “Chronicle,” “Afflicted” effectively takes outrageous and larger-than-life situations and captures them at the size that they would unfold in the lives of regular folks.

Nonetheless, we all know this terrain pretty well by now, and as Derek begins to change, each phase of his transformation feels overly familiar to anyone with a working knowledge of popular horror tropes. There are some flashy moments — an encounter with the police in a dark, labyrinthine apartment provides some much-needed third-act thrills — but I was left wanting to see these directors apply their gifts to a filmmaking style that’s less exhausted.

Clif Lee and Derek Prowse, in their first feature outing, announce themselves as stylish writer-directors with lots of potential. It will be interesting to see what they can accomplish when they aren’t trying to resuscitate a style of moviemaking that needs to go away long enough for us to miss it.