This story first appeared in the Down to the Wire issue of TheWrap magazine.

A rare look into the mind of Alan Turing is hitting the auction block just a few months after the release of “The Imitation Game,” an Oscar-nominated portrait of the British mathematician and computing pioneer’s life.

Bonhams auction house has acquired a 56-page notebook that Turing kept until he took his own life in 1954. The handwritten notebook, willed to Turing’s friend and colleague Robin Gandy, contains complex mathematical notations about the development of a universal machine language.

“You can see him working on the foundations of computer science,” Cassandra Hatton, Senior Specialist in Fine Books and Manuscripts and the History of Science at Bonhams, told TheWrap.

The Morten Tyldum-directed film, set primarily in Bletchley Park, Buckinghamshire in the U.K. during World War II, focuses on Turing’s tireless efforts to crack the German “Enigma” code. But the mathematician doesn’t reference his work with the Allied Forces in the notebook.

Instead, it is filled with nearly 30 pages of complex mathematical notations and musings on a universal language for computing machines, as well as references to other mathematicians like Turing’s Cambridge mentor Alonzo Church and calculus pioneer Gottfried Wilhelm von Leibniz.

As Benedict Cumberbatch‘s on-screen portrayal of Turing shows, the mathematician was obsessed with solving puzzles of any kind. So, when he set aside his critical work at Bletchley Park to muse on machine languages, it was perhaps just his own way of unwinding.

“Most people would watch TV or play a game, but Alan was thinking, how do I come up with a universal language that computers can use?” Hatton said.

Screenwriter Graham Moore, who won the Writers Guild Award for adapting “The Imitation Game” from Andrew Hodges’ book, saw some pages from Turing’s notebook and couldn’t make heads or tails of the advanced mathematics. But he was nonetheless moved by the experience.

“Just seeing the handwriting gave me the chills,” Moore said. “I’d seen some of his letters when I was writing the script, and to see that same handwriting as he was working on math problems was great.”

Turing’s notebook will be auctioned off on April 13 at Bonhams Fine Books & Manuscripts in New York. Here are some of the pages:

Turing grapples with a Leibniz notation, writing: “I find extremely difficult to understand in spite of it having been the one I understood best once!” 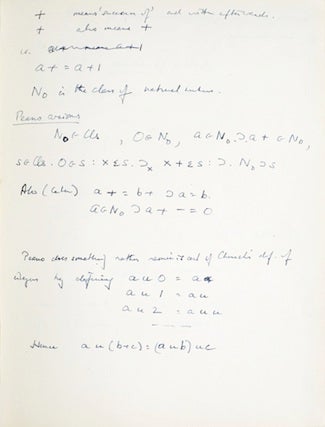 A comparison of the “Peano axioms,” from 19th century Italian mathematician Giuseppe Peano, with the work of Alonzo Church, a Turing professor at Cambridge. 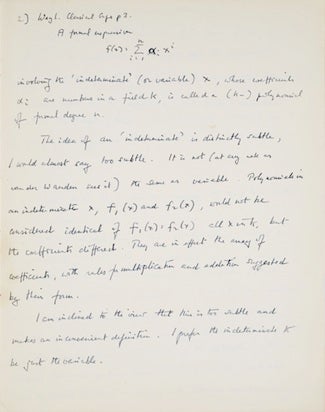 Turing considers an “indeterminate” or variable, which he calls “distinctly subtle, I would say too subtle.” 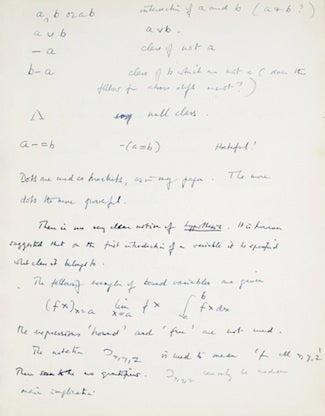 “There is no very clear notion of hypothesis,” he writes. “It is however suggested that on the first introduction of a variable it be specified what class it belongs to.”

Is Alan Turing lost? “What is the way out?” he asks. “The notation … hardly seems to help in this difficult case.”