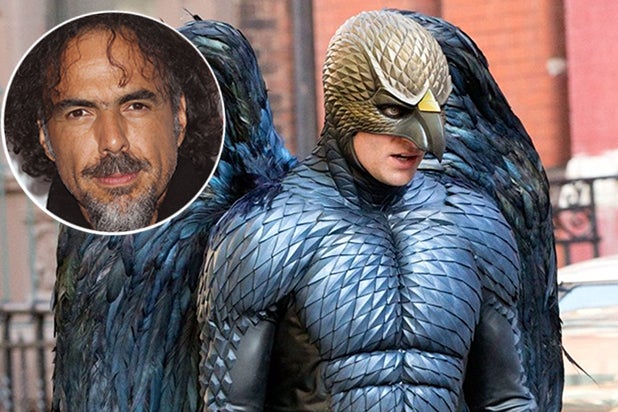 “Birdman” is a crazy, daring, maybe even foolhardy comedy that dazzled audiences at the Venice, Telluride and New York Film Festivals — but now it’s time for regular audiences to take a look at director Alejandro G. Inarritu’s wild ride, which opens in limited release on Friday.

The film is the story of fading actor Riggan Thompson (Michael Keaton) who refuses to revisit his blockbuster superhero role as Birdman, and who is instead trying to mount what he hopes will be a career-saving Broadway adaptation of a Raymond Carver short story. Mishaps ensue, Riggan’s tenuous grasp on reality takes a beating, and Inarritu and cinematographer Emmanuel Lubezki (“Chivo”) whip up a weird and wooly concoction designed to look like one long, continuous shot and set to the beat of all-percussion score that almost never stops.

Also starring Edward Norton, Emma Stone and Zach Galifiakanis, the Fox Searchlight film is a major departure from Inarritu films like “Amores Perros,” “Biutiful” and the Oscar Best Picture nominee “Babel,” but the director hasn’t lost his passion for provocation and risk-taking. He talked to TheWrap on a brief break from filming the Western thriller “The Revenant,” which he’s currently shooting in Calgary with Leonardo DiCaprio and Tom Hardy.

TheWrap: What made you decide to tell this story using what appears to be one unbroken shot?
Alejandro G. Inarritu: I think the form and the content basically were born together, you know? I always thought that the only way to get into Riggan Thompson’s mind, and to talk about something that is so subjective, so internal, so abstract as the ego, was to really experience the one single point of view constantly.

We like fiction, because we can edit, we can manipulate, or we can have the illusion of manipulating reality. But that’s not how we live our lives. Our reality is a long shot, and we can’t escape. So I wanted to put in the shoes of this guy the audience, you know?

But why did you want to put the audience in the shoes of this particular guy?
Well, you know, the last five years I have honestly been aware of how my own ego works. My creative process can be really torturous. And sometimes I question myself: How can this guy sometimes be clever and good and useful, and sometimes can be a dictator, a tyrant, an inquisitor like Torquemada? I am never satisfied, never, a chronic dissatisfaction with the results of anything.

So I’ve been going through some meditation states these last years, and I thought it could be a great theme to talk about. The origin of the story is that — my own personal relationship with my own creative process, and the ego, how he tortures me sometimes.

You must have warned the actors about the long, intricate takes early in the process.
Yes, I talked to them, but nobody understood me, I think. Especially Michael. When I talked to him he said, “Yeah, yeah, sounds great, terrific.” But then when we started rehearsing, it was so demanding that in the beginning he was really freaking out.

Why cast Michael Keaton?
Beyond the obvious reading of him having been Batman, which I think is one layer of reading, that he is a guy who has the capacity to do drama and comedy simultaneously. Also, this character is really a prick. And I didn’t want to have somebody that is not likeable. Michael, he can be a prick, but you love that f—ing prick. You feel compassion and empathy for him.

What did it take to figure out the long, elaborate shots? Lots of rehearsal?
Yes. We planned it meticulously, you know? Everything was planned months in advance, in an empty space. Everything was pre-choreographed, all the blocking was designed. So when the actors stepped in, for them it was walking in that line with precision and actuality and honesty — which is maybe one of the most difficult things you can ask anybody.

For me as a director, I always like to arrive late to the scenes and get out as soon as possible, but here I couldn’t have that luxury. It had to be interesting and fluid and more like liquid, not fragments. Like a jazz piece.

And you couldn’t fix things in the editing room.
No. Even the pace of the film, the internal rhythm — normally I’m used to finding that in the editing room with six months of luxurious black room quietness and internalization. Here you had to do it while you are on a rollercoaster. Every beat, every open door, every line had to be delivered.

And all the time there were problems. The actors might do something, or the focus puller sometimes f—ed it up, or Chivo moved the camera wrongly, or one line was not working … Always at the end of the day it was unnerving.

Did you sometimes walked away from the set thinking you didn’t get what you needed?
Absolutely. I wanted to shoot off my nose many times. I knew that I couldn’t hide any shitty scenes. Sometimes there were scenes that I was not happy with, and at night I knew that I would never be able to take that scene away, because it was connected. It was like an endless spaghetti, you know what I mean? And I knew that any noodle could choke me.

As a director, where do you go from here? Is it going to feel too safe to go back to shooting coverage and putting scenes together in the editing room?
[laughs] Probably. This film taught me a lot. And I’m applying that knowledge. We’ve established a very artificial order in making films. We have made, and I’m talking about myself, I abused editing so much. Covering so much, being so safe.

This process that I went through, it pushed all of us to be much more honest and much more aware and much more exciting and more alive, instead of relying on coverage and editing. I love editing, and I think I’m very good at it, but it’s safer when you can go into the studio and control and polish and erase and hide and redo things. It’s not as exciting. When you are really live, yes, everything can go wrong, but it’s more honest.