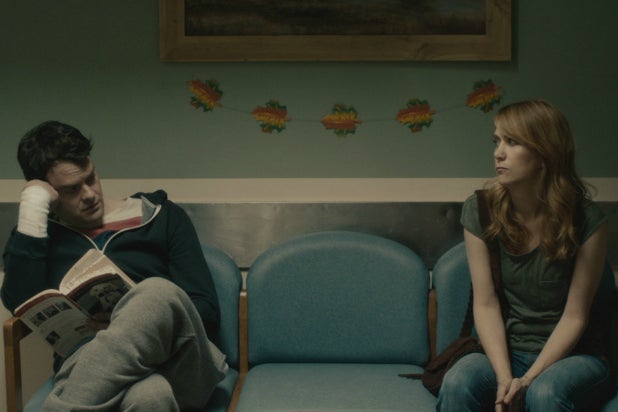 Sundance has long been a place for artists to expand their repertoire, whether it’s music video directors wanting to show they can handle the rigors of feature filmmaking or Disney Channel starlets demonstrating their range by playing heroin-addicted prostitutes with smudged eyeliner.

And while Bill Hader and Kristen Wiig aren’t exactly doing Eugene O’Neill in “The Skeleton Twins,” the movie allows them to plumb some darker character facets without completely abandoning their gifts as comedians. Director and co-writer Craig Johnson gets the balance between the grim and the goofy just right in this sophomore effort, and his stars do as well.

Hader plays the suicidal Milo, who would be (in the character’s own words) “just another tragic gay cliché” were it not for the fact that his twin sister Maggie (Wiig) was on the verge of swallowing a bottle of pills herself when the hospital called her about his having just unsuccessfully slashed his wrists.

Reuniting after a decade-long estrangement, the siblings wind up being each other’s only hope in working out their life problems — he’s still hung up on a relationship from the past (with Ty Burrell’s character, who’s alternately excited and horrified to see Milo again), while she dodges entering parenthood with nice-guy husband Lance (Luke Wilson) with meaningless affairs and a hidden stash of birth control pills.

The heavier drama is leavened throughout with the twins’ odd sense of humor; the hilarious scene in which Milo cajoles Maggie into joining him in lip-synching “Nothing’s Gonna Stop Us Now” was one of the festival’s most talked-about moments. Johnson may go to ouchier places than previous Sundance crossover hits like “Little Miss Sunshine,” but “The Skeleton Twins” promises to be an audience-pleaser nonetheless.

More divisive, based on an admittedly random sampling of Sundance audience members, is “Infinitely Polar Bear,” which stars Mark Ruffalo as Cam, a manic-depressive dad in Boston taking care of his two young daughters while his wife Maggie (Zoe Saldana) pursues her MBA in New York City.

There are any number of movies that have played mental illness for comedy, from “The Ruling Class” to “Silver Linings Playbook,” but “Infinitely” (set in the late 1970s) tries to make bipolar disorder adorable — or, at least, Ruffalo does, taking off the brakes and playing each moment at or past its bearable extreme.

Thankfully, he’s got Saldana (and, as the daughters, Imogene Wolodarsky and Ashley Aurderheide) anchoring the film with performances that feel more down to earth. Just a prediction, but I suspect that audiences that love or hate “Infinitely Polar Bear” will be divided precisely by how they feel about Ruffalo; for me, this usually reliable actor goes too big, and it sucks the oxygen out of the rest of the movie. Great collection of vintage Lacoste shirts, though.

Two very intense documentaries on the subject of pedophiles hiding behind their positions of power screened this year at Park City: “Happy Valley” at Sundance and “Who Took Johnny” at Slamdance. The former has the higher profile, dealing with the Penn State scandal that destroyed not only convicted child molester Jerry Sandusky but also his boss, beloved gridiron icon Joe Paterno, who knew what Sandusky was doing but reported it to university higher-ups rather than to the police.

“Johnny” examines a less well-known case, although it has its own place in history — Johnny Gosch, who disappeared in 1982, was one of the first missing children to be featured on a milk carton, and the film points out how different the treatment of such cases was in a world before Amber Alerts.

“Happy Valley” director Amir Bar-Lev (“The Tillman Story”) has the advantage of telling a story that’s been extensively researched and investigated, but he scores key interviews with Paterno’s family as well as Matt Sandusky, the adopted son who came forward as another of his father’s victims.

With Johnny Gosch still missing, directors Michael Galinsky, David Beilinson and Suki Hawley examine the impact that the boy’s disappearance had on his mother Noreen but also raise questions (without necessarily answering all of them) about the possibility of child molesters in positions of power who use their clout to discourage investigations or cover up their crimes entirely.

It’s not a crazy assertion — Sandusky, after all, used his football fame to hide in plain sight, starting charitable programs for underprivileged children as a way to find vulnerable new victims.

One last thing: I saw about a dozen movies in five days at Sundance, a drop in the bucket given the scope of the festival, but I wanted to point out some strong performances by relatively little-known actors in a variety of films. “52 Tuesdays” star Tilda Cobham-Hervey has a fresh face and a mischievous glint; don’t be surprised if the Australian actress becomes an in-demand gamine in English-language cinema.

Finally, while I’ve been remiss in catching Cameron Monaghan’s work on the Showtime series “Shameless,” his empathetic and sensitive performance as a (literally) haunted teen in “Jamie Marks Is Dead” bodes well for his ongoing film career. (Monaghan will turn up next on the big screen in “Vampire Academy.”)